It snatches the title away from the Toyota Innova 2.0G.

The Toyota Innova 2.0X 2018 now officially becomes the top-of-the-line variants in the Innova fleet in Malaysian market, according to latest car news.

Unlike the regular 8-seat Innova, the 2.0X is a 7-seater MPV but more functional and comfortable with 8-way adjustment driver’s seat, upgraded row seats, retractable cup holders, individual armrests and a seatback table. Particularly, this is the only Toyota Innova model to feature leather upholstery. The rest of the inside falls heir to the 2.0G trim. On the subject of exterior, the Toyota Innova 2.0X 2018 looks like a crossover concept. It is currently modern, sleek and nippy with LED lightings, chrome accents on the spoiler, chrome black window sills, new back door garnish along with 17-inch black alloy wheels with new arches. 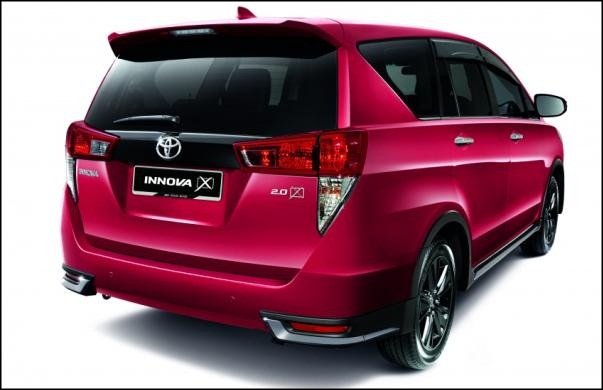 The Toyota Innova 2.0X 2018 looks like a crossover concept

Under the bonnet, the Toyota Innova 2.0X 2018 is driven by a 2.0-liter Dual VVT-i engine making 139 PS and 183 Nm at 4,000 rpm. Power is transferred to the rear wheels thanks to a 6-speed automatic gearbox. Strikingly, Power and ECO drive modes all are available.

In addition, a Panoramic View Monitor, a Digital Video Recorder and security/solar are likewise optioned.

Let's look through together the Toyota Innova 2018 prices in Malaysia: