Nissan NV350 Urvan 2019 is given a fancy new style package

Appearance packages, we all know them too well; they give a new, and significantly different custom look to a vehicle which vastly differentiates it from the base model.

Typically, car manufacturers have their own in-house subsidiaries which produce these packages and one such company under the Nissan marque is Autech. Autech which typically focuses on tuning and converting Nissan cars for numerous business and special applications has been around for a long time.

Aside from making Nissans faster, the company also produces appearance packages for the company’s models and this time, they’ve come up with a fancy, clean, and sharp look for one of Nissan’s best sellers; the NV 350. And yes, that’s the Urvan.

Why this new Nissan NV350 Urvan?

Well, aside from the being reliable and spacious people carrying utility vehicle, vans here in the ASEAN region and alas also here in the Philippines, like any other vehicle, are treated to modifications usually appearance wise by their owners.

As such one may argue that Nissan and Autech may have observed this and could not help to please their Nissan NV350 Urvan users.

So in that note, Autech has come up with what’s called the Rider package which bestows upon the Urvan a new body kit which replaces the stock ones at the rear, the front and the sides which in combination will give you the impression that the van is lower than it really is. "Looks slammed" is what they call it. The NV350 with the Rider Package is quite a looker indeed

What to expect in new NV350 Urvan?

As for the front, the original stock, black, “v-motion” honeycomb grille has also been replaced by one which features a shiny, fancier looking series of horizontal bars running from headlight to headlight culminating in a thick shiny silver bar at the topmost portion.

Another thing you might notice is that the Nissan logo nowhere to be seen on the grille, a special one instead intended to be placed at the tailgate is made available instead. A badgeless grille is a very common aftermarket modification found here in the Philippines and Asia in general so Autech definitely recognized this.

Adding to that; the shape of the case surrounding the fog lights has also changed to feature an “inverted L” like shape to which a thin strip of LED daytime running light positioned beside the original fog light is also available.

Coming inside the NV350 Rider, one might say that changed to the interior is minimal. That is not the case as some small parts and pieces have also been given some upgrades. First, the steering wheel is not wrapped with leather, parts of the door trims; now leather and even an option for water-resistant seats are available. 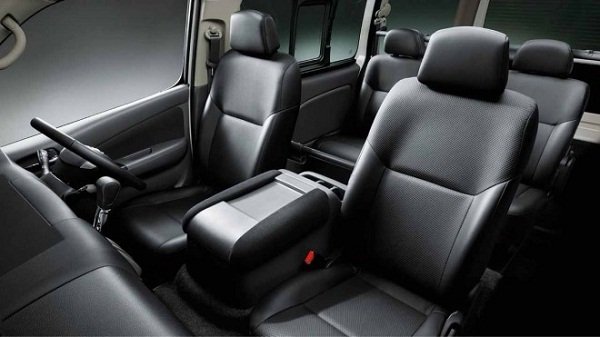 To conclude, the Autech NV350 Rider package is an attractive set of upgrades to consider getting for your beloved van. As for the pricing and availability of the package in question, no details as of this time are made available.