Our first look at the all-new Toyota Camry TRD 2020

TRD has come up with a new variant for the Camry, the Toyota Camry TRD 2020 and like any other TRD vehicle, they did a lot to the Camry in terms of looks and handling.

Ah, the Toyota Camry, one of the most well-known and top-selling mid-size car ever built since its introduction in 1982. It is generally known for its graceful proportions, for the comfort it provides its passengers, and of course for its reliability.

As such, the Camry has easily become the go-to vehicle of choice for people who just want to get from A to B in a comfortable fashion with no hassles on the daily. So for some car enthusiasts, the Camry has been thought of as the everyday Joe’s car, an alternative card if you’re not driving the car you love, or even as a beater. There are some enthusiasts however who have continuously praised the reliable qualities of the Camry. And towards the more extreme end of the spectrum, some have even turned the V6 variants to make more power.

Some even say that the Toyota Camry has the potential to become a sleeper car which is a car that looks normal on the outside but it actually souped-up and modified to make more power.

The Camry’s V6, after all, can take the additional stress that some after-market modifications may cause. And besides the already-had Toyota cars, or rather TRD has recognized this with the previous Toyota Camry XC20 TRD and now, we have a new one.

1. Toyota Camry TRD 2020: A potential for the enthusiast market

For decades now Toyota Racing Development or TRD for short, Toyota’s in-house tuning shop has given otherwise mundane vehicles more in terms of looks, speed, and of course attention from car guys and gals. Now recently, TRD has revealed their latest creation, a TRD variant of the aforementioned mid-size sedan designated as the 2020 Toyota Camry TRD.

Expected to be released officially at around fall (September to early December) of this year in the United States, the 2020 Toyota Camry TRD has a ton going for it in terms of track-oriented parts and a very athletic, sporty look that one would not expect from a factory-made mid-size, luxury vehicle at all.

First, let’s talk about Camry TRD’s exterior. It comes with a two-tone color scheme which just looks gorgeous. Its roof is black in contrast to the lighter color that will come with the body.

Also, the C pillar is split into two by the aforementioned color scheme. Also, note that the side mirrors and other exterior features like the lower rear and front bumper will be colored in black as well. 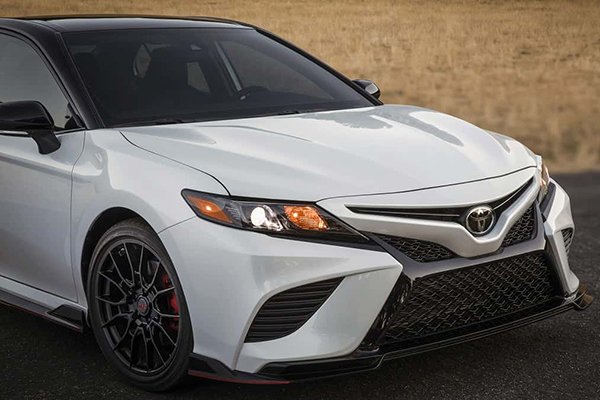 The front end gets a different looking bumper and a different grille. Looks gorgeous yeah?

From the side, the 2020 Camry TRD will comes equipped with a set of fantastic looking 19-inch matte-black wheels. Now apart from looking good, these wheels are actually around 3 pounds lighter than the standard Camry’s set. The Camry will also come with Bridgestone Potenza tires.

The rear also gets a large wing which looks outright aggressive. Other parts TRD added are winglets on the lower rear and front region, and a very noticeable diffuser between the twin exhaust pipes. >>> Schedule a visit to the nearest Toyota dealerships to have a Camry right now!

While the 3.5 liter, six-cylinder, 2GR-FKS V6 remains largely unchanged for the Camry TRD, the said engine will become standard on the TRD trim. It produces around 301 horsepower which is, of course, sufficient for a sporty car of the Camry’s size.

Take note though that there’s a large aftermarket for the said engine so there’s no telling what a determined car guy can squeeze out of that engine. In stock form though, the Camry TRD can reach 100 km/h in 5.8 seconds.

For the Toyota Camry TRD 2020, other really interesting stuff that it will come without the factory will be a really different exhaust system which ensures much more flow and will sound definitely beefier than the one on the standard Camry. TRD also stiffened the ride more as the TRD Camry will have more in terms of under-chassis bracing. Also, the interior of the Camry TRD 2020 gets red accents, red stitching, and other TRD goodies

Another significant revision is the TRD tuned suspension which of course will be stiffer than the standard. The coil springs will be harder, and the shocks themselves are from TRD whose tune on their suspension systems will always lean towards the sporty side.

As of now, there’s no news whether the Toyota Camry TRD 2020 will reach the Philippines so for now though, you can keep yourself updated with our Toyota Philippines price list. Also if word gets out that this beauty of a car will be released here, you’ll be the first to know.