Mercedes-Benz at 120: A brief rundown of the Three-Pointed Star’s history

It’s been a long ride from the first automobile, but the journey is far from over.

Mercedes-Benz celebrates twelve decades of existence this year from its roots in 1900. It has certainly come a long way, spawning the genesis of the modern automobile to become one of the world’s premium automotive brands.

Here’s a look back at the road Mercedes-Benz has traveled, and the path that still lies ahead.

Mercedes-Benz: A Star With a Thousand Facets

His DMG-Phoenix won all the races held at the French Riviera, from sprints and hill climbs to long-distance runs, but as the OG gearhead, he wanted a car that could do more. A fatal accident involving Daimler engineer Wilhelm Bauer in April 1900 forced the company to abandon racing, but Jellinek promised a huge investment if DMG designed a new sports car, to be called the Mercedes (after his daughter) and delivered in October of that year. Jellinek's daughter Mercedes, whom the new company was named after

Thus was born the Mercedes 35 P, with an elongated shape and technical refinements that addressed numerous issues plaguing early horseless carriages at the time.

The Mercedes name would be registered two years later as a trademark, proudly spelled out in a bold typeface.

Ever wondered why the Mercedes-Benz logo uses a three-pointed star, apart from the iconography symbolizing the company’s lofty aspirations?

It was added by DMG to the existing trademark in 1909, the spokes representing founder Gottlieb Daimler’s vision of his engines being used “on land, on water and in the air”.

Daimler also had a practice of using a star to mark his home on a postcard. Initially, the star was not encircled within a ring, which was eventually added in 1913 accompanied by the “Mercedes” lettering and four small stars.

Automotive engineer Karl Benz had previously unveiled the Benz Patent Motorwagen in 1896 as the first car powered by a combustion engine (with his wife Bertha responsible for further refinement and early sales).

This gave rise to Benz & Cie, an automotive company that rivaled DMG, with a trademark bearing the Benz name framed by a laurel wreath, referencing Benz & Cie’s success in racing. 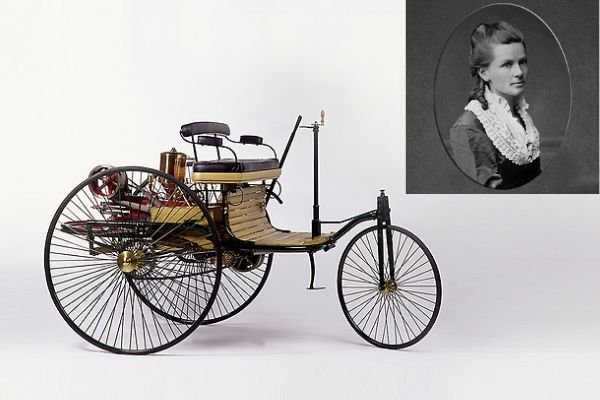 As the two companies merged in 1926, so did their respective trademarks: the word Mercedes moved up to the ring’s upper edge, replaced by the name Benz on the lower edge, with laurel wreaths on the space between and the three-pointed star at the center. The new Mercedes-Benz name was trademarked in 1927, with the logo following a year later.

Mercedes-Benz transitioned from aggressive lines during the 1920s to a more rounded form factor, starting with the Type 500 K roadster in 1934 and the 260 D (the world’s first diesel production car) in 1936.

The Type 180 in 1953 introduced the three-box bodywork as well as the “pontoon” design (so called because of the fenderline running the length of the car resembling seaplane pontoons), which provided greater stability resulting in improved accident safety. 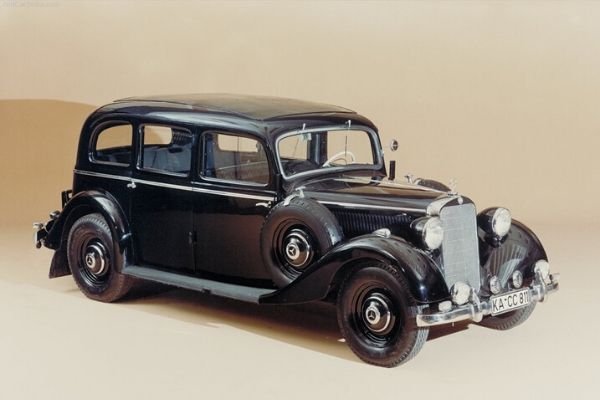 This was followed by the 300 SL in 1954, known both for the iconic gullwing doors and its horizontal air intake, utilizing aluminum components at different areas for weight reduction.

The Heckflosse (Fintail) models followed in 1959 with the 220 series, featuring short rear fins that served as parking aids by marking the car’s trailing edge, as well as being the world’s first cars to have a rigid passenger cell and energy-absorbent crumple zones. 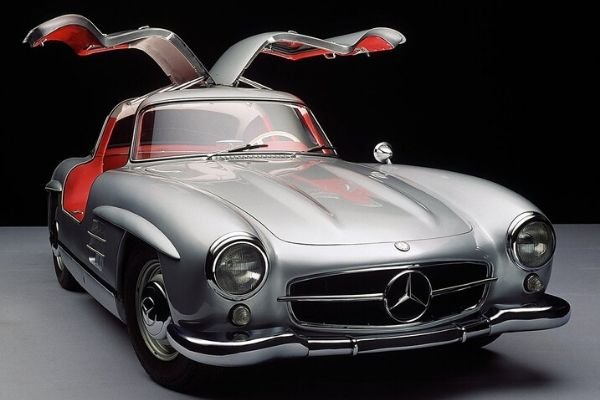 By 1960, the 220 SE two-door coupe had done away with the tailfins in favor of a more streamlined shape.

Explorations into what was possible

In 1979, the G-Class off-road series was born, which still captivates customers and enthusiasts alike. The foundation of the best-selling C-Class was laid down by the Mercedes-Benz 190 (W201) in 1982, followed by the M-Class in 1997. 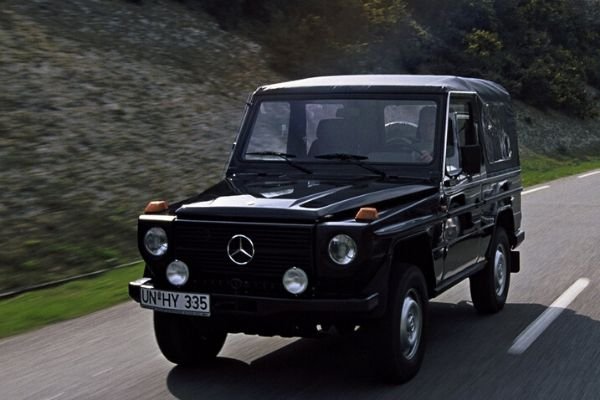 The G-Class is one of the longest-produced Mercedes-Benz vehicles, surpassed only by the Unimog

In 2004, the CLS became the first to feature a fastback body style, marketed as a four-door coupe. Mercedes-Benz followed this up with a five-door shooting brake body style, with the smaller CLA and CLA Shooting Brake making their way to the compact segment. The Mercedes-Benz CLS is the world's first four-door coupe

A new Sensual Purity design language debuted with the revised A-Class in 2012, balancing traditional craftsmanship and high technology evident in the exterior, interior, and user experience.

This marked the company’s pivot into a holistic luxury brand, transcending automobiles into aviation with the Airbus H145 helicopter and the seagoing ARROW460-Granturismo speedboat.

In 2019, Mercedes-Benz unveiled the Vision Mercedes Simplex which pays homage to the brand’s heritage and signals its eventual direction; a blending of past and future.

The black-and-white sculpture is a futuristic render of the Mercedes 35 PS, complete with an open cockpit design and a three-pointed star motif down to the tire treads. Battery-electric vehicles are the latest step towards technological luxury through the Mercedes-Benz EQ spinoff brand. This will be led by the EQC electric compact luxury SUV, which made its public debut at the 2018 Paris Motor Show.

Not only does the vehicle feature zero emissions and range of over 400 kilometers on a single charge, but the EQC also scored a perfect five stars in Euro NCAP crash tests.

“Mercedes-Benz is…a brand that arouses emotions and provides a holistic experience for our customers”, says Mercedes-Benz AG marketing head Bettina Fetzer. Our goal is to firmly anchor this brand in people’s hearts for at least another 120 years.”

With the strides that the company has made throughout its history, we have no doubt that this is possible.

See automotive history as it unfolds with Philkotse.com.

Besides the Mercedes-Benz Price 2023 price list we update regularly, Philkotse.com also lists down the hottest car promos from all dealerships nationwide. These include enticing deals like low monthly amortizations, low downpayments, and cash discounts.