Sep 20, 2019
Editor's rating 4.0
User's rating 4.5
With the all-new BR-V, Honda has stepped up their compact crossover SUV game. Read our expert Honda BR-V 2020 Philippines review to know How does it look, ride and drive?

As of this year, Honda Philippines has decided to up their crossover game. Which is very timely upon considering the unprecedented successes of its rivals; the Toyota Rush and the Mitsubishi Xpander. Both, of course, come with newer and much more striking modern designs when compared to the old version of the Honda BR-V.

For those who are less familiar, the Honda BR-V, or Bold Runabout Vehicle was a model that was first introduced back in January of 2016. It was previewed at the Philippine International Auto Show that year and it consequently went on sale on October 16. From its release in 2016 to 2018, Honda Philippines has sold around more than 20,000 units of the BR-V which of course definitely makes it one of Honda’s more popular crossover models. Now, as we’ve said, the Xpander and the Rush have quickly turned out to be massive competitors in that market segment so Honda alas, gave the BR-V a new 2020 update.

So without further ado, here’s our full-scale Honda BR-V 2020 Philippines Review from Philkotse.com!

Upon taking a look at the new 2020 Honda BR-V exterior, one will note that there are a lot of changes that were made to the vehicle. Changes that we like very much.

Overall, it certainly looks much more modern and much more macho than ever before and gone are the very obvious signs that the BR-V indeed shares not only a platform but also a lot of design elements with the some Honda models namely the Brio and the Mobilio. Instead, the BR-V now looks more modern and posh with a design that has evolved into something that sets it apart from its platform brothers.

Upfront, the new grille definitely looks more premium and it also now belies a tougher persona underneath all those hyper-modern design elements. The horizontal shapes that run across the grille itself provide more character and are not as flat as those found on the previous Honda BR-V models providing for the vehicle a larger, heftier appearance. Take a close look at the revised front fascia. Looks beefier than the old one yeah? 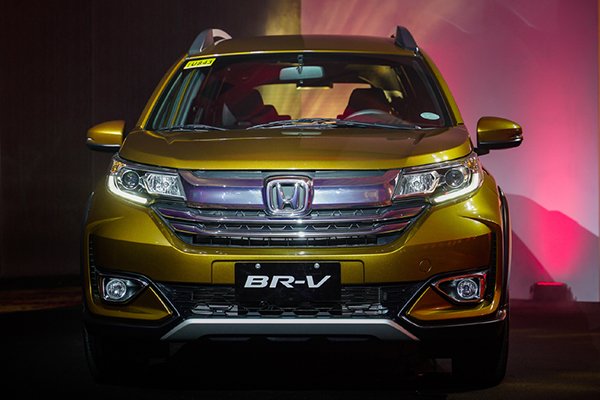 Towards the sides, the wheels are also new-ish. We say that because it appears to look very much like the set utilized by the 2019 Honda City 1.5 VX+ NAVI. Not that that’s a bad thing, on the contrary, the design of the wheels actually enhances the overall Honda BR-V exterior look.

The rear also saw some welcome changes. Gone are those gaudy pair of faux vents and in their place are much more useful reflectors. Also the rear looks wider.

Just like the old BR-V, the new 2020 Honda BR-V interior has enough space even when occupied fully by seven passengers. When the third row isn’t used though, the room for the second-row passengers turns from just enough to roomy to stretch one’s legs.

As for the seats themselves, the set bolted on the 2020 BR-V’s interior are fairly comfortable and are clad in leather. The dash, along with some interior panels still uses a good number of hard plastics but those are said to be durable enough and you won’t see major gaps.

The dash and the steering wheel are black-themed with some contrasting brighter colors which of course provides the interior some measure of sportiness. Another new thing to note about the 2020 BR-V’s seats is that they gave it adjustable headrests. What’s regrettable about the interior though, especially for the driver, is that the seat height remains the same.

The trunk capacity of 223 liters is also pretty decent enough for a daily driver. Fold those third-row seats though and the cargo capacity increases considerably to 521 liters. While that’s not the largest in comparison to other SUV vehicles in the market segment, that amount of space can actually be good enough for traveling around the city and for short family out of town trips. 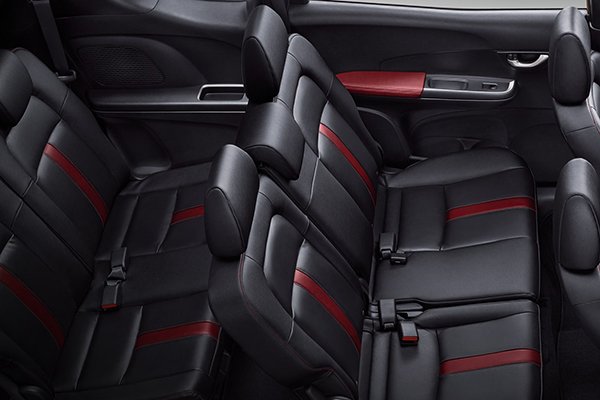 Note the color scheme of the third and second-row seats. If that doesn't look sporty we don't know what is!

Like the previous version, the new Honda BR-V interior comes with a number of features typical of a modern vehicle of its price.

The entertainment system is handled by a 7-inch touchscreen display which thankfully now has Android Auto and Apple CarPlay, along with other notable features like a push to start button, a decent set 4 piece speaker set, Bluetooth connectivity and two USB ports.

The more affordable 2020 Honda BR-V 1.5 S base variant does not get the Apple CarPlay and Android Auto options albeit it still has the touchscreen and those other interior features that we’ve mentioned.

>>> Contact details of the nearest Honda dealerships to check out the latest promo and financing options.

While those figures make the 2020 Honda BR-V’s performance, the most powerful in its class, some have noted that the vehicle’s power band is a bit poor on the mid-range. It does have that initial considerable push from a standstill but once you try overtaking, you’ll sometimes need to apply more gas. Despite the lack of mid-range torque, the 2020 Honda BR-V’s handling is still one of the most enjoyable in its class. While it does have some body roll and some understeer if driven to its limits, the BR-V handles really well on normal city and highway drives.

It feels stable and the steering is neither too light nor too heavy. Also, if you’re feeling a bit naughty, you can actually make the front tires spin and squeal thanks to its excellent low range torque.

Also note that the Honda BR-V 2020 has a MacPherson strut and torsion beam combo and the brakes are ventilated discs up front and drums for the rear.

Both of these work well especially the suspension which is great in conjunction with the new BR-V’s 201 mm ground clearance. And yes, the 2020 Honda BR-V can handle a bit of the rougher terrain too which is, of course, a boon for those is living in areas rife with sketchy roads.

For active driver-assist technologies, it comes with Honda’s Vehicle Stability Assist which works by using traction control and stability control in conjunction with each other. This explains how the 2020 Honda BR-V can handle conditions like mud with aplomb.

Apart from that, both of the 2020 Honda BR-V’s variants now come with reversing cameras which are of course pretty useful in the daily parking lot battle of Metro Manila. The refreshed model also comes with ABS with EBD, an engine immobilizer with a security alarm, ISOFIX, and speed sensing door locks.

Like the previous version, the new Honda BR-V comes with dual front airbags. All in all, good enough as a family vehicle.

While the BR-V as a model has been around for quite some time, the new design along with the improvements made to its interior shapes the 2020 Honda BR-V to be a desirable vehicle. It’s even more desirable due to the value it can give you as a car buyer due to the fact that despite being updated, Honda Philippines only gave it a Php 6,000 price bump.

Which is, of course, a great deal considering that the new BR-V comes with a lot of stuff which didn’t come with its predecessor. And yeah, it’s also one of the safest compact crossover SUV’s out in the market right now. This makes the Honda BR-V 2020 Philippines an ideal vehicle for families who’re thinking of buying a seven-seater but as of yet cannot get something much fancier.

And of course, especially upon considering the new design, who says that the BR-V can’t be fancy itself right? I mean, just look at the front end and you’ll be convinced.