Oct 28, 2019 | Same topic: Handy Maintenance Tips
Helpful information about the main battery and the second battery. Determining whether a second battery is a good or bad decision for your vehicle.

Whether you’re an old-timer or a millennial car owner, you’re bound to be someone who loves tunes while driving. We certainly can’t blame you. Who wouldn’t want their favorite song booming in the cabin just to shake the boredom off the long and tiresome journey?

Indeed a good playlist and a decent set of speakers can really do wonders for the weary driver. However, frequently using the car stereo unit may have a negative effect on your car batteries.

This is mainly the reason why a lot of people invest in a new battery. This “second” battery is typically used to power the stereo head unit and speakers. But is this really worth it? Should you also invest in one for your car? Is this a useless trend that’s not worth following? Read Philkotse.com's advice below so you can find out for yourself.

1. Why you shouldn't buy a second battery for your car

If you’re not one of those music-addicted types of drivers who frequently use their booming head units, then you won’t find too much use for an extra battery. As a matter of fact, adding an extra battery for the audio can actually do more harm than good. This may seem like a complete lie, but the reason is actually pretty basic. Adding an extra battery for the audio can actually do more harm than good.

First off, you need to know that the battery that your car is equipped with, is meant to do one particular purpose: it provides an adequate amount of amperage so you can start your engine.

Once your engine starts and you have the alternator spinning, the battery becomes a load. This load is something that your car has to carry all the time. If you decide to add a second battery for the audio, you are doubling that load. This is because the alternator now has to keep the two batteries charged up. Doubling the load on your alternator can wear it out faster.

>>> Basic information for you: Car battery - What you should know before making a purchase. Once your engine starts and you have the alternator spinning, the battery becomes a load

2. When can a second battery be helpful?

A lot of us grew up thinking that if one is great, then two must be better. But does this apply to car batteries as well?

Here is why a second battery IS helpful. Whenever your vehicle’s engine is running, any of the accessories that you turn on, take a little bit of power from the car battery.

This is the reason why you usually end up with a dead car battery when you leave your headlights on all night. If you add another battery, you will have an extra power reservoir. This means more power for you to consume. If you add another battery, you will have an extra power reservoir

You may also find it useful even for really long trips where you may need to use some of the accessories even while parking. These examples are some of the best situations where we can suggest a second battery.

To put it simply, if you have a habit of playing tunes even after the car is parked or the engine is turned off, you can confidently get a second battery. But other than that, we don’t really see any other problem that can be solved by putting two batteries in one car.

3. Using your car stereo head unit with the engine off

There are so many ways one can require the aid of a second battery. If you have high-performance in-car audio components or you just like to take your car out camping every now and then, you’ll definitely need this. As a matter of fact, the battery that came with your car may only last about an hour of playing your stereo unit with the engine off.

But if you want to get a more accurate time duration of how long your battery can last, we can help you with that too. All you have to do is find out how much the reserve capacity should be in the car battery. This also applies if you ever think about buying a second car battery. The RC in this formula stands for the reserve capacity. This is a number counted in amp-hours. This tells the car owner or mechanic just how much juice the battery has in its full charge state.

The “Load” indicated in the equation refers to your battery’s sustained load power as required by the audio system. This can also refer to the power that’s required by other accessories to run.

So for the sake of better representation of the problem, let’s say that your entire audio system requires 300 watts of power load. Your battery, on the other hand, possesses a reserve capacity amounting to 80. If we apply the formula, the operation should look something like this: 10 x 80 / 300 = 2.66 hours 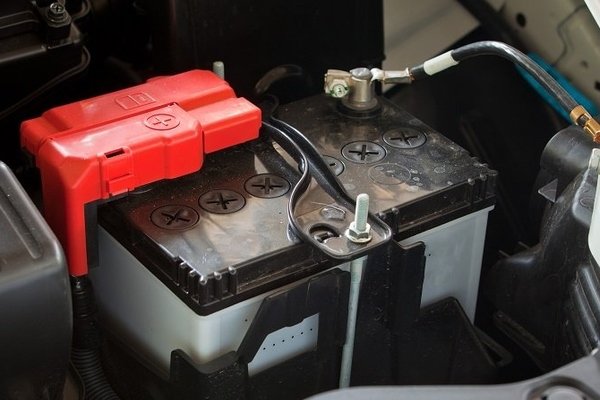 Take note, however, that the more powerful or higher quality your amplifier is, the higher the load that it requires from your battery. This translates to less running time for your car stereo. This is, of course, if you don’t want your battery to run out of charge.  If you add a second battery, you can keep your tunes booming for longer even after the engine is turned off.

The latest batteries sold today display different information compared to their packaging before. Instead of the usual amp hours, these batteries are now printed with their reserve capacity in minutes.

For example, let’s say that your battery indicates that it is capable of a 70-minute reserve capacity. This means that it would take 70 minutes for an accessory with a 25 amp load.

After that, you’re pretty much left with a battery level below 10.5 volts. Aside from that seemingly accurate formula, weather and temperature conditions can actually affect the overall condition of your battery.