Disc Brakes vs Drum Brakes: How are they different?

Disc brakes and drum brakes are usually seen together in common, modern vehicles. But how are they different from each other? Let's find out with Philkotse.com.

Brakes! All cars have them because everyone eventually needs to stop or slow down. And in certain emergencies, might mean the difference between a catastrophic crash and avoiding any kind of accident at all.

While in the early days of transportation, brakes were rudimentary and amounted to something as simple as a piece of rubber or wood pressing against the rim of a wheel. Crude and sometimes ineffective. Most simpler means of transport use primitive braking systems like these

Drum brakes were invented much later by Louis Renault and in the 1910s and have been widely used since then in not only in cars but also in different types of transport.

Nowadays, the usual brake system configuration we see from vehicles are disc brakes up front and drum brakes at the back. But some cars actually have disc brakes all around.

This then begs the question, how are these two types of brakes different from each other? And why are there some vehicles that use one or the other or both?

In order to answer those questions though, we first need to take a closer look at each type of brakes and how they work.

As the name suggests, disc brakes use a rotor which is pinched by two pieces of oppositely mounted pads by calipers. In most vehicles today, disc brakes are actuated hydraulically and use brake fluid.

Historically, disc brakes were not immediately used widely for vehicles as they had problems like premature wear because of the dusty roads at the time. The copper that they also used for the brake calipers wore out more quickly.

Disc brakes saw their first successful use on airplanes and tanks and in Britain around the World War 2 period, Daimler used these type of brakes on their Daimler Armored car. In terms of racing application, disc brakes were first used in 1951 on a Formula One car. Later in 1953, it helped Jaguar score a win in the 24 Hours of Le Mans.

The first mass-produced cars to use disc brakes is the Citroen DS.

Modern disc brakes systems had advanced enough in design and materials used to address its main problem which is the generation of heat from friction. One such advancement is to have “ventilated” discs which help dissipate heat. 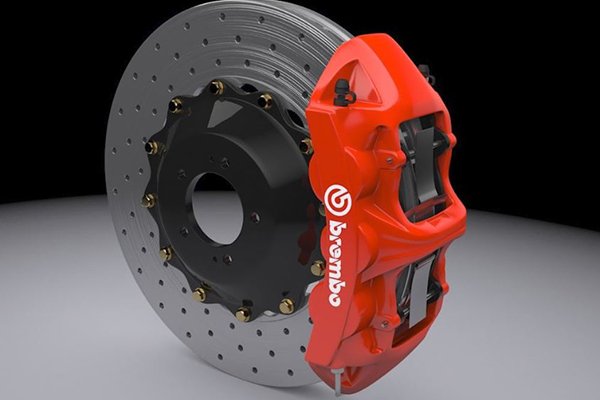 In some very high end, high-performance cars, discs even use reinforced carbon, composite ceramics, and many other materials.

In order for a disc brake to work, calipers are pressed by pistons whenever you press the brake pedal. These calipers which have brake pads attached to them are responsible in pressing said pads into the disc to create friction. The friction then creates the necessary force to slow down or stop a vehicle.

Generally, disc brakes are regarded as superior to drum brakes as they are lighter and heat is dissipated easier due to the rotor actually exposed to air outside the vehicle. Some performance vehicles take advantage of this by building body kits designed to provide air cooling for disc brakes.

After hand lever brakes which were popular during the early days of the automobile, drum brakes were widely used. >>> Related: How to adjust your drum brakes in 7 steps (with video)

When the pedal is pressed, a set of shoes would be pressed on the interior of a round shaped part called the drum which actually turns together with the wheel. This causes friction which in turn slows down and eventually stops the vehicle. Like disc brakes, most drum brakes also use brake fluid to actuate the brake shoes.

In many driving conditions, drum brakes will do just fine. It has, however, a major flaw when it comes to situations where you need to break a lot: racing, descending a hill or repeated slowing down from very high speeds.

The performance of a drum brake in these situations will reduce mainly because of the heat. When the internals of a drum brake is over-heated they lose the ability to provide stopping power because they can only operate effectively as long the brake shoe can absorb the heat coming from the kinetic energy of the wheel movement.

Another thing that compounds this heating problem from drum brakes is that drum brakes, in general, have their parts wrapped around inside a “drum” and therefore cannot be cooled by air passing through or under a vehicle.

>>> Read more: 3 major scenarios and advice for the emergency brake.

In today’s automotive market. It is common to see high-performance or even luxury vehicles making use of disc brakes for all four wheels. A lot of vehicles, however, especially lighter, more affordable sedans and hatchbacks, continue to use a disc/drum configuration.

While some might say that some of these car companies are doing so to save money and reduce the cost of manufacturing a vehicle, it is evident that the disc/drum configuration works just right for a majority of cars today.

Why? It is often easy to forget that the materials used, the construction and the design of both types of brakes have vastly improved over the years.

You might be surprised to learn that even the current drums brakes today can actually perform better than those disc brakes commonly used in the ’70s and ’60s and modern disc brakes of today are exceptional enough that most vehicles only require two of these up front for sufficient stopping power.

As such, most manufacturers know that about 60 percent of a vehicles braking force comes from the front so clearly, the front-disc, rear-drum configuration we see today can do the job.

In racing, your car, whether it be a heavily tuned and modified Honda Civic or an inherently fast Mark IV Toyota Supra, you might want to upgrade to an all disc brake configuration. If not, you’d want to get larger disc brakes and more powerful calipers for your front end. In racing, you might want to upgrade to an all disc brake configuration

As we’ve said, saturated heat from repeated slowing down from a high-speed will cause your brakes regardless to type to lose its effectivity. Having a larger, ventilated disc brake even only for your front wheels will there provide a lot of help because these actually dissipate heat better than your stock disc brake setup.

Nowadays, parts for your brakes are easily accessible and there are tons of ways to upgrade. Also, maintaining the disc brakes you already have nowadays is easier as there are a ton of resources and available services for these.