Let's check out 5 simple ways to determine if the car was soaked in flood.

You are very excited that this day has finally come – the day when you’ve completed the money you’ll be using to buy your very first car. It took you several years to save up for this and you also maximized those years to search for the perfect car for you.

You already know what you want, where to buy and all you have to do now is to meet the seller or go to the used car shop where you found your car, inspect it and take it home. You know what you want, all you have to do is meet the car you want to buy

But, even if you want that car so much, you have to be ready to inspect it. And one of the most important things to check is if you’re buying a used flood damaged car. Flooded cars are not always identified by using merely your vision and touch. Your nose can contribute greatly in determining if the car was flooded or not.

So today, Philkotse.com will discuss how you can use your senses to know if the car you’re eyeing to buy has become a submarine some time before or not.

I. What’s The Deal With Flooded Car?

I’m sure you’re asking what all the commotion is about. You may be saying “So what if it’s flooded? It’s within my budget anyway and the car is cool.” This may not be a big deal to you, just yet, but let me give you some facts about flooded cars. Flooded or not, does it make a difference? Absolutely - anyone should never make a mistake of buying a flooded car

Imagine your engine swimming in water. All the mechanical and electrical parts are water damaged. In a simpler analogy, imagine your phone being dropped in water – is it still useable? No, it’s totaled. Even if you take it to the service center, they won’t be able to do much about it because all the important parts that make the phone work are all wet.

Same goes with car, if the parts that make it run were soaked in water, pretty much it’s good as dead. If you don't want car breakdowns on the road, make sure you choose a car that's not been flooded

What some people do is “rebuild” the engine and revamp whatever’s left well on the car to make it look okay. Then they sell it. Cruel, right? But since the car was flooded, the chances of your engine having mechanical problems are really high.

It could mean frequent road breakdowns, frequent visits to the mechanic, more money down the drain, and repair after repair until you’ll be the one to give up on it.

Yes, at first you may think you’re on the winning end of this bargain because it’s so cheap, but in the long run you’ll spend as much as you could’ve allotted for a decent car.

II. How to Spot a Flooded Vehicle?

Now that we have defined why you shouldn’t buy a flooded car, it’s time to know how you can spot a flood damaged car.

Okay here comes the three important senses of your body – eyes, skin and most importantly, your nose. Yes, eyes and skin can see and feel but it’s the nose that can smell if the car has been drenched in flood water. They can replace all the physical attributes of the car which can deceive our eyes and skin, but they won’t be able to take away the smell. As a buyer, you have to be extra careful when buying used car

Musty or moldy odor is one of the most obvious signs that a car has been flooded. If you sniff within the car, although everything seems to be new, you’d still be able to smell that moist, dampened smell that you usually smell when your shirt doesn’t dry up properly, “amoy kulob” and “amoy amag.” If you go inside the car, and you smell these two – it’s a sure ball that the car swam in the street pool.

Don't hesitate to ask the seller questions if you find unsure about anything about the car.

2. Check the carpet: Damp or New

If you notice that the carpet seems new, don’t be too happy – it could be a sign that the car has been water damaged. It’s easy to notice a new carpet if placed in an older vehicle. Also, try to feel the carpet and see if there are any damp parts. If you take notice of a damp carpet, the seller might say that they just shampooed it but start to think twice. They could be saying that to trick you into thinking that you’re getting a clean car. Then go back to number one – smell. If you smell a hint of mold or mildew or that wet dog smell, better move on to another car.

3. Check under the hood: Engine issues

This is the most important part of the car you’d inspect for water damage – always check what’s under the hood no matter how much sales talk you’re receiving from the seller. Do a proper test drive and listen for noises that may be coming from under the hood. If there’s a way for you to check the transmission fluid and engine oil, do so as if the former is murky and the latter seems to be diluted, it’s a sign that the engine was soaked in flood. 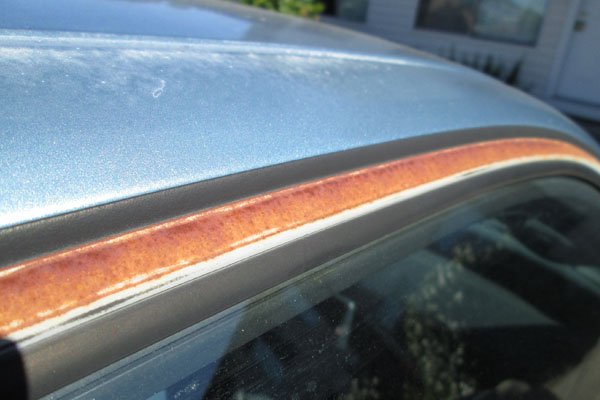 Seeing rust is never a good sign, especially on parts that shouldn't be in contact with water

Whenever you buy a used vehicle, it is important for you to get its repair history. It will tell you what previously happened to the car, what repairs have done and if the repair of a certain part has been repeatedly on going.

This will also indicate if the car has been taken to the repair shop after the flood. This could be the straightforward way of knowing if the vehicle was flooded. If repair records are not available, at least you are equipped with the first four to still determine if the car was flooded or not.

Equip yourself with essential car buying tips and advice for your own sake and safety. You sure won’t want to spend more money repairing a flood damaged car when you can spend it for another in better condition. Don’t be fooled. Be informed.