Read on to know how to deal with oversteer and understeer.

As all of you may well know, especially you dudes and gals out there who are very much into cars, every single individual vehicle will behave in a certain way while traveling on a road. There are many factors behind this.

Maybe it’s because the car is front wheel driven and the roads are bumpy, wet, or just plain bad. Or maybe the person driving is doing so in a situation beyond his or her abilities? Or maybe you’ve neglected the condition of your car for such a long time. Etcetera.

It simply cannot be summarized down to a tee on how a certain type of vehicle and its parts (modified or otherwise) will behave in certain types of situations and roads.

Be that as it may, we simply have to talk about oversteer and understeer, two things of which car enthusiasts will have definitely heard of and are the two terms concerned with how a car behaves around corners.

And God forbid, may have unintentionally experienced before and may or may not have a clue as to what happened. That experience folk is quite scary. Or to some others quite a thrill. Intentional oversteer, also known as drifting, however, is a story for another time. Weee!

To some of you folks who haven’t a clue though, what are they exactly? And moreover, what is this “vehicle dynamics” that I have heard once before but still have no clue about? Let us go through in explaining the second term first.

Vehicle dynamics is the study of how a vehicle, in this case, your car will behave while traveling with conjunction to how a person is driving. This is also with regards to the design of the car and much more individual factors relating to such aspects will be taken into consideration like your cars’ drivetrain and braking systems, aerodynamics, its suspension, steering, weight distribution, what kind of tires are you’re using and many more. Keeping your car stock will ensure a predictable driving experience. This poor car, however…

When talking about how the car behaves as a result and relation to those aforementioned, all can be boiled down to the term "vehicle handling". A term which also has a lot of behind it. I.e.; body flex, body roll, ride quality, speed wobble, and of course our topic; understeer and oversteer. First, let’s come with Philkotse.com and go over what understeer is.

Understeer is defined as the propensity of a vehicle to turn less than what the driver intended. In other words, it is understood as you want your car to turn to a certain direction but it wants to go straight instead.

This happens when your cars’ front tires lose traction maybe due to going too fast, braking too hard in a turn, initiating the corner with too much speed, and or your car badly needs maintenance with regards to its tires, suspension, steering etc.

Scary right? Due to the fact that one bad consequence of understeering your car is that it might end up turned over in some ditch on the side of a road or worse, your engine bay is filled and full of foliage. Yeah definitely scary. For some of you guys who have not yet experienced riding an understeering car; people say that when it happens, it is somewhat tenuous and subtle. Imagine now that you’re driving. You turn into that corner coming up and sure enough, you feel that reassuring weight and heft behind your wheel as it grips the apex.

Suddenly, the tires lose its grip and as such your car begins to slide. To your terrified surprise, you now feel that weight behind your wheel has disappeared. A little note though, understeer is a little bit more predictable than oversteer that can be corrected more easily so that’s a little bit of relief for you.

But then again, oversteer can usually happen with front wheel drive vehicles which are common here in the Philippines. 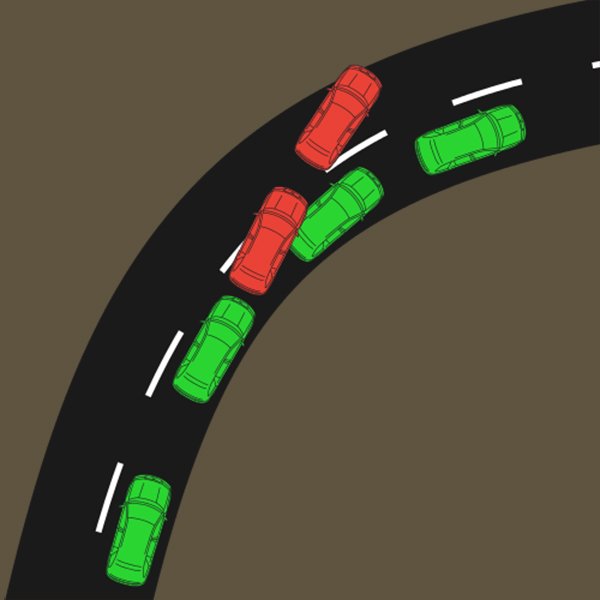 The car in red demonstrating what understeer would look like.

In order to avoid unintentional understeer, as with any emergency situations, first, the driver would need to calm down. Also, a little bit of knowledge beforehand would give a huge advantage to escape it because it isn’t easy to escape something you don’t know you’re in.

Some drivers with less experience might be tempted to immediately apply more steering in an attempt to correct direction. That would give you virtually no response due to the fact that your front tires simply can’t grip anymore.

In technical terms, they have gone beyond their grip threshold. What you do instead is to let off the gas and ever so gently apply the brakes. Another way is to reduce steering lock because if you go ham on your steering wheel, muscling it towards the direction you want to go, you’d be effective in reducing more grip from your tires which is not what you want.

So what you do instead is to ease off the steering wheel.  Another newbie mistake is suddenly letting off the throttle. This my friends are bad especially if you don’t know what you’re doing as this would cause your vehicle’s weight to transfer to the front axle thus initiating a spin. “They lied to me. Spin to win doesn’t work!”

More experienced drivers though go about their way during understeer by deliberately letting go of the throttle so that the rear of their car will point out more towards the apex of the turn albeit in a more controlled manner. In short, turning the understeer into what’s called as lift-off oversteer which we’ll talk about later. Make no mistake though, this is very difficult to do.

Oversteer is the complete opposite of understeer and is generally defined as the behavior of a vehicle when it turns more than what the driver intended.

Understeer happens when the back to your car, especially with rear wheel drive vehicles, kicks out towards the curb. This can happen when you go into a corner with too much throttle which of course causes your rear tires to spin and thus losing grip.

Another is when a driver suddenly let’s go of the throttle initiating what’s called lift-off oversteer. And in rather rare circumstances is when a driver accidentally puts the car in a lower gear when traveling at a high speed which causes the rear wheels to lock.

This happens because the sudden change in gear will rob the fast spinning rear wheels of the necessary power it needs. As this happens, the weight of the vehicle is thrown forwards causing it to suddenly change direction. All types of vehicles can understeer. Yes, even big ol' trucks.

So what to do when your car oversteer?

With a bit of practice, and knowledge, a driver can avoid unintentionally kicking their vehicle’s rear out. First off is to countersteer into the opposite direction of the curb all the while slowly decreasing input to the accelerator.

These actions, with enough practice, will cause the car into a neutral orientation with respect to the curb.

As mentioned before, being calm in unusual situations can be a huge boon to you as a driver. Panicking as soon as you feel your car loses grip will only cause you to make more mistakes. Familiarization and the regular maintenance of your vehicle will also help greatly.