Alleged Ford Escape 2019 spotted in the US

We are of the option that this is a Ford.

Recently, an alleged Ford Escape model with thick camouflage has been spotted on the road. Specific location has not been revealed though, it appears that the SUV was on the Nevada desert in the US. 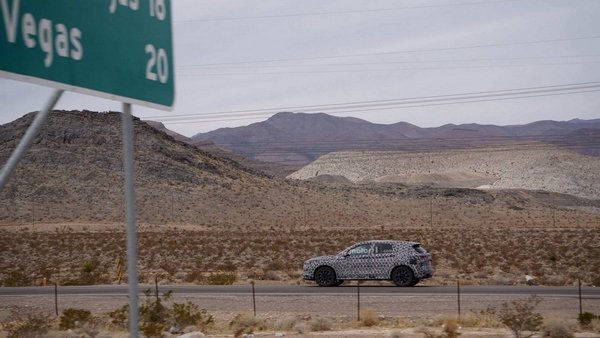 Recently, an alleged Ford Escape 2019 with thick camouflage has been spotted on the road

We are not totally sure that this test mule is the Ford Escape, but its headlight partially exudes Ford design, the Escape design to be exact. Besides, at the rear side window, it seems that there is another pane of glass covered up behind that. This is a familiar notch shape of the Ford Escape. Even in the taillights, we also see some similarities between this prototype and the Escape. We are not totally sure that this test mule is the Ford Escape, but its headlight partially exudes Ford design

If our speculation is true, it’s highly likely that this will be an all-new Escape, not merely a facelift. In the main, this disguised SUV is thinner and lower than the current Escape and the rear is completely at odds. The front fascia, on the other hand, features less chunky fenders.

Some claim that this SUV might be a Ford Edge; however, based on its spy shots, it’s absolutely not. It’s highly likely that this will be an all-new Escape, not merely a facelift

At the present, the existing Ford Escape has been due for an overhaul. Since the Escape’s platform has run though around 5 years, a Ford Escape 2019 model is necessary in defiance of a mild-facelift for 2017 model year.

Ford Escape 2022
One of America’s favorites, the Ford Escape is a compact crossover. It was developed and released with Mazda. Though it is a compact SUV, its features and capacity are comparable to a larger vehicle. Though big in size, the Ford Escape is easy to maneuver. It can seat 5 people with comfort. Its towing capacity is about 1,600 kg. It has a unibody platform with two trim levels; the XLS and XLT. It is available with 2 WD and AWD. It has a four-wheel-lock system and under the hood is a 3.0L V6 Duratec engine that produces 200 hp. It can accelerate from 0 to 100 kph (62 mph) in just 10 seconds. It has a 4-speed automatic transmission with gears that can be shifted manually. You can choose a 2.0L Zetec engine that produces 10 hp and is more convenient because of lesser fuel consumption compared to its 3.0L counterpart. The Ford Escape is equipped with safety features that include seat belts and knee bolsters. All models get dual front airbags while the Limited trim level gets side airbags. The first XLS variants do not have an ABS. Currently, Ford Philippines offers the Territory crossover as a replacement to the Escape in its lineup.