Toyota Harrier 2018 (facelift) to be launched in Malaysia soon

The pricing for Malaysia version has yet to be disclosed.

According to latest car news, the Toyota Harrier 2018 facelift version will be soon coming to Malaysia. Formerly, this long-awaited Harrier did make its debut in Singapore last July. Toyota Harrier 2018 facelift version will be soon coming to Malaysia

Via some leaked leaflets, all of this long-awaited SUV have been exposed. As to the front, the Harrier comes with LED fog lamps and a wider but lower front grille framed by dual-projector LED headlamps with LED daytime running lights and sequential indicators. The rear, meanwhile, gets new red-tinged taillights and a chrome-tipped exhaust pipe. Side profile is decked with refreshed 18-inch turbine-design wheels. Interior-wise, it appears that all materials are well mixed together, from faux leather, Ultrasuede upholstery, carbon-weave metal to Nappa leather. In particular, the SUV comes fitted with a redesigned driver’s seat along with a height-adjustable power tailgate with memory. 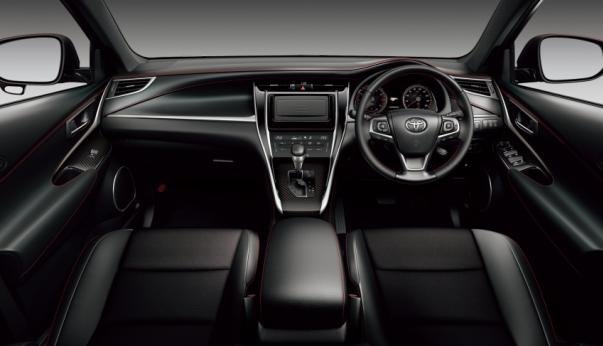 Interior-wise, it appears that all materials are well mixed together

Further, it is expected that ventilated power-adjustable front seats with memory and a panoramic sunroof will be added to Malaysia version.

Propelling the Toyota Harrier 2018 is an all-new 8AR-FTS 2.0L 4-cylinder turbocharged engine coming into from the Lexus NX. The engine is capable of 231 PS and 350 Nm and is aired to a 6-speed automatic transmission. Toyota says that this powerplant can boost decent fuel consumption of 13.0 km/L on the Japanese JC08 cycle. In AWD mode, the SUV consumes 12.8 km/L.

A host of standard safety features from Toyota Safety Sense driver assists pack are also equipped in the 2018 Harrier such as Pre-Collision System, Auto High Beam and Active Cruise Control. In addition to that, Vehicle Stability Control and 7 airbags also help keep you safer.

In Singapore, the Toyota Harrier 2018 is available in 3 variants:

>>> Click to catch more new cars and concepts in the world