Here are the 10 cars that influenced our passion for automobiles

These are the reasons for our staff’s motoring madness.

Filipinos are car-crazy, and the Philkotse staff is no exception. This motley crew of wheel wackos will hungrily pounce on anything with seats, a steering wheel, and a combustion engine. And we’re just talking about the good side. Each one of us could have had a promising and lucrative career elsewhere, yet we chose to write about the everyday machines that many tend to take for granted. Where others see a tool to simply get from A to B, these weirdos see the beauty in every inch of bodywork, every fiber of upholstery, and every greased moving part. But what were the actual automobiles that got our motor running? Here’s a rundown of the 10 cars that influenced the Philkotse staff’s craving for cars.

The VW Beetle’s distinctive shape led it to become alternately known as kotseng kuba (hunchback car) and pagong (turtle), even inspiring the local version of the punch buggy game, where kids (and even adults) race to punch the other first upon seeing a Volkswagen Beetle on the road. Although it was spartan in terms of design and features, the Beetle could hardly be called elegant, with the loud air-cooled flat-four engine announcing its arrival from a kilometer away without the need for a horn (a trademark shared with other locally-sold models such as the Brasilia hatchback, the Kombi van, and the Sakbayan). Still, the Beetle was well-loved because of its quirky looks and mechanical simplicity. There’s also the novelty of having the cargo space in front, the subject of running jokes about missing engines, and how the Beetle carries a spare one in the back. It had no air of prestige about it, which made it an honest car. And although it did have its roots as a Nazi creation, the Beetle eventually became a fixture of the peace movement during the 1970s.

The Jeep Wrangler began as the successor to the CJ range, which was the first civilian line to descend from the military vehicles that fought in the Second World War. Through the years, the Wrangler has been revised and redesigned since its debut in 1986, retaining the trademark seven-slat grille surrounded by round headlamps (with the exception of the square ones on the first generation). Its overall design even inspired a locally-fabricated imitation model. The Jeep Wrangler has made its Willy's-based ancestor proud

True to its heritage, the Wrangler was built to take on rough terrain. The original YJ line was considered almost bulletproof, equipped with the same leaf spring suspension as the CJ range that inspired it, with trackbar suspension links and anti-roll bars that made it less prone to flipping on the trails. Even today, Jeep markets the Wrangler as a midsize off-road vehicle, with features such as a washable interior and three different four-wheel-drive systems, in two- and four-door configurations.

The Toyota Corolla SR for sale was the more powerful version of the standard E30/E50 model, thanks to the double carburetor setup under the hood. This led enthusiasts to consider the SR as Japan’s answer to the Ford Mustang of the era, albeit in a smaller package that gave it the advantage of lighter weight and better fuel consumption. While the original 1.2L 55-hp 3K engine was popular due to its efficiency, compliance with emissions regulations was poor. The 4K engine that replaced it had a bigger 1.3L displacement and came equipped with the Toyota Total Clean (TTC) system, but only managed an additional 5 hp.

The second-generation Mitsubishi Lancer EX, more popularly known as the box-type, made its debut in 1979. Throughout the 80s, it was an aspirational model of sorts for college students as well as young professionals eager to strike out on their own in the corporate world. The metal bumpers on the previous generation were replaced by plastic bumpers that helped reduce the car’s mass. You might laugh now, but the EX was considered aerodynamic in its time, despite the abundance of lines and sharp angles throughout the car’s body. A large greenhouse and low beltline allowed for exceptional visibility from the inside. The EX’s engine made it compliant with emissions standards in both the U.S. and Japan, as well as making it the first Lancer to feature Mitsubishi’s Silent Shaft technology that reduced noise and vibration.

The BMW E36 marks the third generation of the carmaker’s 3-Series line. It was the first to be offered in a hatchback body style, as well as the first to be equipped with a six-speed manual transmission, a five-speed auto gearbox, and a four-cylinder diesel engine. Each model in the E36 line had rear-wheel-drive as standard. 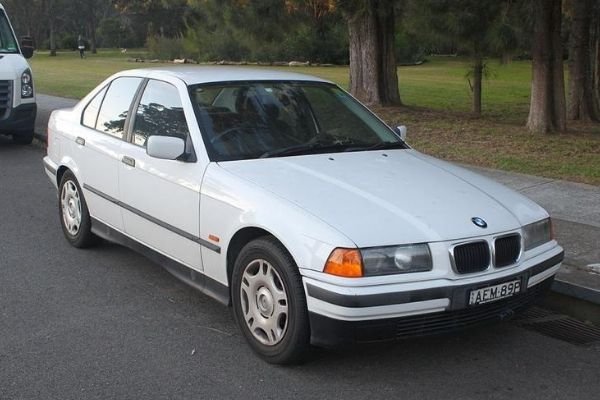 The boxy, wedge-shaped exterior reflected a very Teutonic sense of efficiency without the frills, incorporating safety features such as rain-sensing wipers, dual airbags, antilock brakes, and stability control. A Z-axle multilink suspension introduced in the BMW Z1 roadster was used for the sedan, coupe, convertible and Touring models, while the hatchback was equipped with a semi-trailing arm setup from the older E30 3-Series family. Do any Minica owners have a mechanic named Monico on their speed dial?

Older generations of Filipinos are likely familiar with the third-generation model that was brought here during the 70s, called the F4 (no, not that F4). It was tiny (smaller than even the Austin Mini) and, despite the lack of power steering in those days, was relatively easy to drive. Pushing that tiny four-stroke, two-cylinder engine to the limit became something of a hobby among many Pinoy drivers, giving rise to the adage, “Driving a slow car fast is more fun.”

The Mazda RX-8 for sale is a sports car by Mazda that had a decade-long run, combining its RX-7 predecessor with the Japan-exclusive Cosmo. It was popular for its rear-hinged freestyle doors, and RENESIS Wankel rotary engine that made a whopping 238 hp despite its small 1.3L displacement. Widely praised for its light weight and incredible power output, the engine was also adapted for bi-fuel applications, enabling it to run on either gasoline or hydrogen. 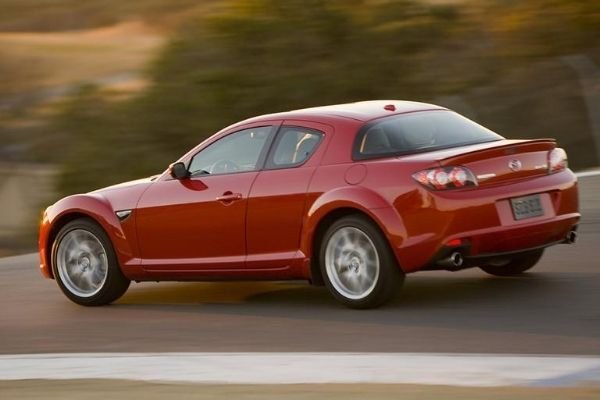 The Mazda RX-8 even appeared in the superhero film X2

Although the RX-8 was a joy for enthusiasts, governments were less than enthusiastic. For one thing, it didn’t meet increasingly stringent emissions standards. It also defied dimension regulations imposed by the Japanese government, which meant that RX-8 owners had to pay an annual tax for driving a bigger car. This was offset by the car’s small engine displacement, translating into lower road taxes.

It was the 1990s, and Mitsubishi was busy making itself known in motorsports events such as the Paris-Dakar Rally and the World Rally Championship. Lancer Evos and turbocharged Mitsubishi Galants were still largely out of reach of the average Pinoy car owner. But if you wanted something that at least looked fast, the Lancer GSR sports coupe was just the ticket. Known in other markets as the fifth-generation Mirage Asti, the GSR was a two-door, five-seater model that had a limited run in the Philippines. Side-by-side with its four-door sibling, it’s easy to see the GSR as a performance model due to its sportier aesthetic (with matching trunk spoiler), making it better suited as a second car or a bachelor’s ride than family transport. The 1.6L inline-4 gasoline engine liked to rev a lot and was accompanied by a sport-tuned exhaust system. It wasn’t built for track days, although the brakes had very good stopping power.

Probably AE86’s biggest claim to fame (or cliché, depending on who you ask) is being featured as the star car of the Initial D media franchise. A subset of the fifth-generation Corolla, the on-sale AE86 Toyota Sprinter Trueno was one of two models lending themselves well to racing (the other being the Corolla Levin) on account of their light weight, easy customization options, and near 50/50 balance. The high-revving twin-cam engine worked well with the 5-speed manual gearbox in delivering power to the rear wheels, enhanced by an optional limited slip rear differential. The power output made the car perfect for carving up winding mountain passes, and still remains popular for rallying and club races. Its clean styling and pop-up headlamps give it a Euro feel. The Sprinter Trueno continues to command a high resale price in Japan and the U.S., owing to its status in popular culture which drives demand especially among younger buyers.

Probably the last of its kind to be based on the Cedia, the Mitsubishi Lancer Evo IX broke cover in 2005. Powered by a 2.0L turbocharged 4G63 engine, it kept all four wheels spinning with 287 hp and 392 Nm of torque. This generation was also the first to incorporate Mitsubishi Innovative Valve timing Electronic Control system (MIVEC) technology, regulating camshaft timing at the intake and exhaust phases to increase power and torque. 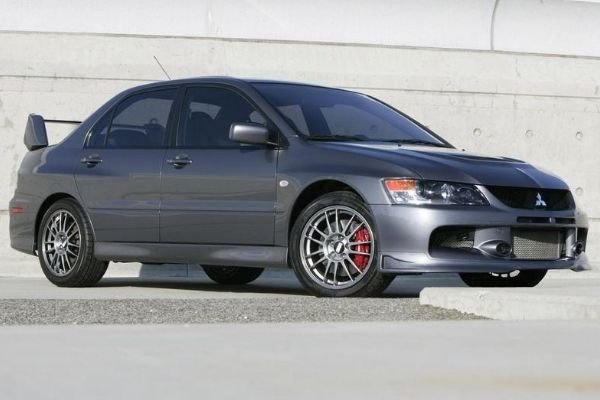