Mar 26, 2018 | Same topic: Highlights of the week
With its Barbarian back, the Mitsubishi Triton/Strada looks more aggressive than ever.

Endeavoring to improve the already eye-catching look of the popular Triton, Mitsubishi has nurtured their idea of giving its pickup a more aggressive appearance. And now, they have actually introduced the limited Mitsubishi Triton Barbarian edition with an exciting package of off-road features to the UK market. Many presume this package will be released worldwide later on.

Overall, orange is the color used purposefully for making the highlights and somehow making the SVP more aggressive. Specifically, the orange is spread in many parts of the car. It is added to the headlight bottoms and the grille. Orange also circles around the fog lights. The manufacturer even decides to put orange to the 6 spokes of the wheels. At the back of the vehicle, orange is used to make the edges of tail lights as well. The area right below the handle of the bumper is also made orange. The roof rails on the top are no exception, they are orange-coated. 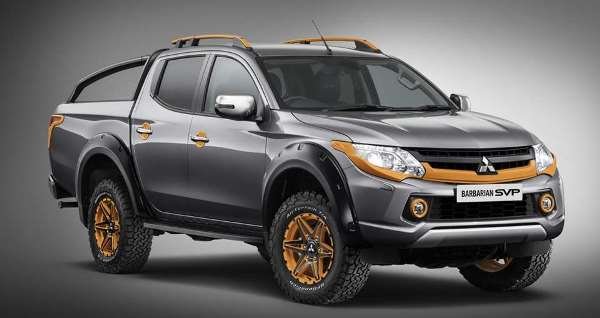 The orange is spread throughout the car's body

Speaking of the exterior, the Mitsubishi Triton Barbarian edition gains a new look with the restyled over-fenders and the alloy wheels made of matte gunmetal. The Triton tires now are made from all-terrain rubber by the BF Goodrich manufacturer. Another that get upgraded in this Barbarian is the appearance of the roof rails, which somehow boosts its bold look. What’s more, the bed now is equipped with a rolling over and a roll bar. 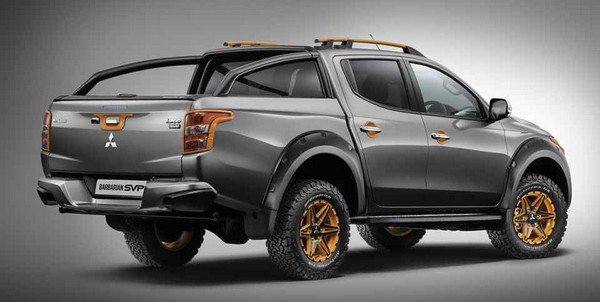 Overall, orange is the color used purposefully for making the highlights and somehow making the SVP more aggressive

Taking a look inside, we easily recognize the unique set of the seats. And one more time, orange helps illuminate the car. Going along with orange, dark leather invigorates the seats. Orange is chosen to be the main element that promotes the special feeling in this model, and for that reason the ambient lighting in the Triton Barbarian also performs orange glows too. 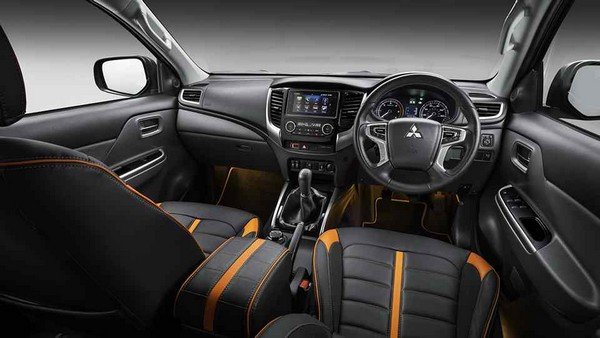 Fans of Mitsubishi will love it to know that this model keeps using the 4N15 engine. The 2.4-litre MIVEC diesel puts out 430 Nm and 181 PS figure just like in standard Triton and Strada. The 4WD model comes exclusive with the Super Select II System of Mitsubishi. There are 2 transmission options which are 5-speed automatic equipped with paddle shifters or 6-speed manual.