Our article will provide you with a wealth of detail on the new Cherokee.

If the Jeep Wrangler 2018 has just made its debut for a month, Jeep continues to unveil another SUV – the Jeep Cherokee 2019. Via a gallery as well as meticulous information, all about the new Cherokee are fully shown.

Broadly, the new mid-size SUV comes with a more modern, sophisticated yet homogenous look thanks to a controversial styling influenced by the all-new Jeep Compass. At the front-end, new tweaks are larger bi-LED headlights taking the place of the polarizing dual-tier ones, redesigned front bumpers and integrated LED fog lamps. The new hood is made from aluminum; the Overland trims, moreover, comes standard with new chrome two hooks. In the meantime, the 7-slot front grille keeps unaltered. The new mid-size SUV comes with a more modern, sophisticated yet homogenous look

As to the rear facet, taillights are decked with a new red LED light bit while the rear bumper is also revised. The number plate recess is also lifted to the power tailgate, which is attacted with the handle to be opened more effortlessly. Besides, a push-to-open fuel filler door, an optional hands-free opening function and a capless filler are also available for more convenience. Speaking of the Trailhawk off-roader, it is dominated by a more ragged front profile, steel skid plates, an increased approach angle, an anti-glare hood decal as well as a bulky set of 17-inch alloys wrapped by off-road tires. A total of ive new wheel designs will come as option for the entire lineup; exclusively for the Overland, it is given 19-inch sleek rollers. 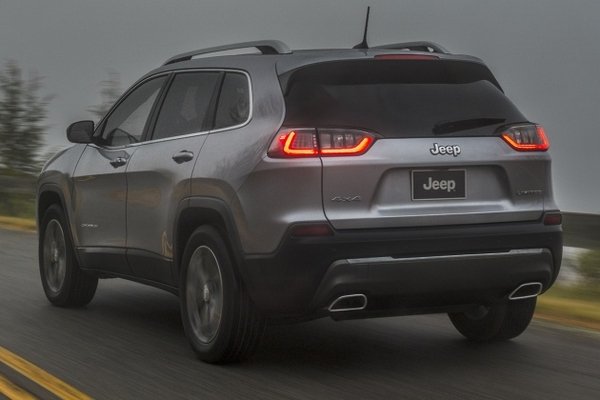 Moving inside, the transmission tunnel is reworked with a larger storage carriage. At the same time, satin chrome accents and piano black trim all further do up the new center console. The feeling of space is also enhanced by brighter colors on the lower half of the cabin. More than that, new color schemes are provided, which are the Dark Sienna for the Overland and the Storm Blue for the Latitude trims. Owing to the fact that the boot is currently more than 75 mm wider, the total cargo space is expanded to over 760L. 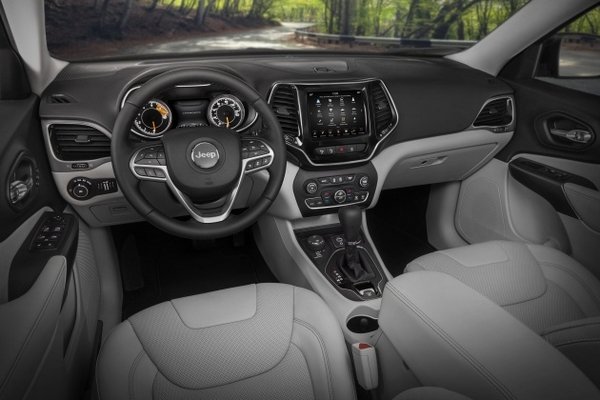 Entertainment-wise, the Uconnect system will make you entertained with either an 8.4-inch touchscreen (w/ or w/o navigation system) or a smaller 7.0-inch. Both support Apple CarPlay/Android Auto, Sirius XM satellite radio, a Send & Go function and emergency and assistance services to boot.

The 2019 Cherokee is fitted with an abundant list of advanced safety features as follows:

The Jeep Cherokee 2019 is blessed with a new 2.0L 4-cylinder turbocharged and direct-injected petrol mill with 270 hp and a peak torque of 400 Nm. Automatic engine stop/start is on hand but dissimilar to its sibling Wrangler, the Cherokee does not go with a hybrid power plant.

What’s more, a standard 2.4L naturally-aspirated Tigershark engine helps to improve the gas mileage by 7.5%. NVH levels are likewise bettered with new intake form. Another engine is a 3.2L Pentastar V6 with 271 hp and 324 Nm, mated to a 9-speed TorqueFlite automatic gearbox for more admirable drivability.

The rest of the SUV are almost unvarying: suspension system, optional 4WD system, and power steering. On top of the, the Active Drive I and II systems are both tuned for more decent fuel consumption and off-road credentials.