User's: 5.0/5
To get a preview for the future arrival of the Ford Explorer 2020 Philippines, let's take a deep dive into the US-spec version and check out what's new!

Made by the Ford Company since 1991, the Explorer is an SUV whose name is derived from a trim package that was utilized on the F-series of vehicles from 1967 to 1986. In March of 1991 though, the Ford Explorer was introduced as its own model to compete against the Chevrolet S-10 Blazer and the Jeep Cherokee.

Also, just like the earlier Ford Bronco II, the Explorer was designed to attract those cars buyers who needed something to haul around their families.

In recent years here in the Philippines, the Ford Explorer has become a premium choice of SUV for those with a sizable family and at the same time those who want something more spacious and premium than the Ford Everest.

After five generations and after numerous variants including the highly recognizable (and feared) Explorer Police Interceptor, Ford updated the model in question to its 6th-gen Explorer which has debuted on January 9, 2019. The all-new Ford Explorer 2020 has been totally redesigned inside, outside and under the hood

The very well deserves this update because after all the Explorer is one of Ford’s top-selling models and it’s also quite possibly America’s best-selling SUV. Like most American car releases, the 2020 6th generation Ford Explorer was first made available in North America, Canada, and other parts of the world while we here in the Philippines have to wait for a bit.

So as a service to our dear reader, Philkotse.com has prepared a brief review of the US-market version Explorer 2020, so that we can have a clear picture of what the all-new Ford Explorer 2020 Philippines will look like; how they improved the styling, the performance, etc.

>>> Latest update: 2021 Ford Explorer: Expectations and what we know so far

On the outside, not many drastic changes can be seen. There are however some new elements like the hexagon patterned front grille. And if you viewed the new Explorer from the sides, you’ll notice that the roof now follows a more sloped line coupled with a shorter rear spoiler. As of the North American region release, the Ford Explorer currently on sale comes with seven wheel design options. The top of the line premium trims gets a set of 21-inch rims while the rest gets an 18-inch set, all of which appear to have new designs. From the side, one can also notice the more sloped roof 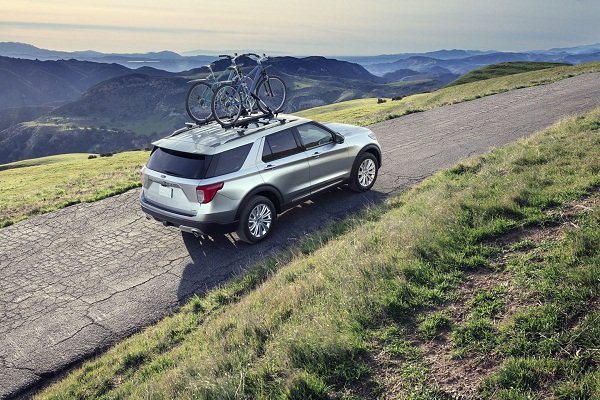 From the rear, the 6th gen Ford Explorer didn't change much at all

Once inside, you’ll be glad to know that the all-new Ford Explorer 2020 is still as luxurious and spacious as it was before. There are some changes though like the vertically oriented 10-inch touchscreen infotainment system which seemingly floats around the center of the dash.

Now some people, specifically fans of the former generation Explorer found this peculiar positioning of the screen to be gimmicky and unnecessary but Ford says that this allows for better split-screen. For you know, looking at maps and controlling the audio at the same time. With regards to the infotainment system, it also comes with several connectivity options like Apple CarPlay, Android Auto, and a 4G LTE WiFi hotspot. So far so good right?

One connectivity option makes a potentially unwelcome return; the SYNC 3. Why is it so reviled? In it's early and even with the third and latest iteration, the SYNC is plagued with several issues with regards to its layout, its actual ability to connect to a smartphone, navigation issues, poor aftersales services specifically with updates and of course, the dreaded issue with a pop-up that says that your phone was disconnected. Still as comfortable and spacious as it's predecessor and more!

There’s even a website entirely dedicated to compiling complaints about the SYNC. So in connection to this, we just hope that Ford has addressed these issues with the SYNC that we have listed above. Purchasing a Ford Explorer 2020 after all means that you're getting a premium, state of the art vehicle which you can expect to use daily with no hassles. Right?

With regards to the rear passenger seats, the all-new 2020 Ford Explorer actually has new features like the sliding 2nd-row seats for easier access to the last row and the cargo space is now 173-liter larger at 2,486 liters with the last and 2nd-row seats folded down. Probably the biggest change made to the 2020 Ford Explorer is where the power of the engine is sent to because the previous 5th generation models were front-wheel drive. Now for the new Explorer, a rear-wheel-drive layout makes its return which of course is very welcome news for SUV models line-up.

Of course, an all-wheel-drive option is available and it appears to function through Ford’s Terrain Management System.

With the simple push of a button, the all-new 2020 Explorer can adjust and optimize its powertrain and braking in accordance to several driving conditions like sand, mud, fast highway driving, and of course, towing which the Explorer can certainly do considering its powerful engine choices.

As for the engines, the 2020 Ford Explorer gets two engine options. The Ecoboost 2.3 liter four-cylinder and a much more powerful 3.0 liter V6 with twin turbos. For the 2.3-four-banger, it has an output of 300 horsepower and 420 nm of torque while the larger V6 makes around 365 horsepower and 515 nm of torque. For the American release, there’s also the ST high-performance version with a souped-up version of the V6 that can make 400 horsepower and 563 nm of torque.

Lastly, there will also be a hybrid Explorer which apart from the aforementioned V6 will also use a 75 kW electric motor. With regards to the ST and the Hybrid versions, we highly doubt that those will ever come to the Philippines.

With regards to safety equipment and driver-assist features, Ford actually splurged a lot on the all-new 2020 Explorer. They gave it the new Active Park Assist 2.0, and the Pre-Collision Assist with Automatic Emergency Braking which through the use of ultrasonic sensors and radar is able to provide pedestrian detection, forward collision warning, dynamic brake support, blind-spot monitoring, and lane-keeping assist.

The 2020 Ford Explorer also comes with a rear parking camera with sensors and a built-in lens cleaner.

Considering the Ford Explorer's size, these features which minimize driver error due to blinds spots and what-not will presumably come in handy especially here in the Philippines where city roads are often than not, quite tight, and parking spaces are tighter.

While there’s no word as of yet from Ford Philippines, several sources say that the all-new 2020 Ford Explorer might come to the Philippines in the middle of 2020. And with regards to the price, the 2020 Explorer’s base model starts at USD 37,000 in the areas where it’s currently available.

If you convert that amount to pesos, that’s around Php 1,907,100. If you factor in taxes and other relevant pricing factors though, the actual retail price for the new Explorer might hover around the Php 2.7 million to Php 2.8 range. Take that with a grain of salt though as that figure is just our attempt at a guess and the 2020 Explorer's actual price might be higher than that.

If you want to check out current available Ford Explorer Philippines along with their respective prices, refer to the table below for reference: All-new Explorer 2020 is forecasted to be sold at the price around 2.8M in the Philippines

While waiting for the official launch of the all-new Ford Explorer 2020 in the Philippines, let's take a closer look at the specification of the current available Explorer in the market.

ALTERNATIVE REVIEWS TO THE 2023 Ford Explorer