Editor's: 4.0/5
A pleasantly surprising challenger coming from an unknown automaker. Despite the global SUV and crossover craze, there’s always a spot on the menu for sedans in the Philippines. It’s a lucrative segment, mind you, as the overall best-selling nameplate in 2020 is a subcompact sedan, thus you’d see a lot of them in the market especially coming from newer players.

For Changan, it’s the Alsvin. Beyond the unfortunately weird-sounding name (it means “fast horse” in Norse mythology), what can the Alsvin offer to discerning Filipino car buyers? Is it a good introduction to an unknown car brand? And can this car – that in this day and age, doesn’t have a remote key fob for the door locks – really woo you into buying one?

I’d start this review by revealing the Changan Alsvin’s price, for reasons you’ll understand as you read along. I was provided with the keys to the top-spec Platinum variant, which sells for P639,000. At that price, you already get projector halogens with leveler, LED DRLs in place of fog lights, side mirrors with turn signals, and 15-inch alloy wheels. Design-wise, the Alsvin isn’t exactly a head-turner but it does pique some interest – probably because of its gaping grille or the unknown badge that looks like a flipped Acura logo. A closer look at the Alsvin's front end

But for the most part, it does blend well with the sea of sedans on the road, especially with the mundane white paint that the tester comes with (more exciting colors are available, FYI). Plus, the wrap-around taillights kind of resemble a particular Korean model. If that’s good news, that’s entirely up to you. 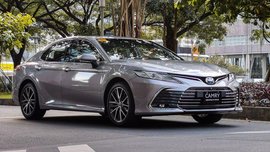 Inside the Changan Alsvin

While the exterior styling is a bit lackluster, the cabin is where you’d be surprised. Sure, getting in will need you to actually use your keys to unlock the doors, but at least synthetic leather wraps the height-adjustable manual seats and elbow rests, while the tilt-adjustable polyurethane steering wheel doesn’t feel very cheap.

A bevy of hard plastics is expectedly found on the dashboard and several touchpoints. You’ll appreciate Changan for the textures employed, though, which somehow elevates the aesthetic appeal of the cost-cutting measures employed, albeit marginally. There’s a center storage box and sunroof, which are, again, surprising at this price point, plus there are plenty of cubbyholes and cupholders (the bottle holder on the doors can even hold large bottles). I just wish Changan does away with the piano black plastics around the audio controls and gear lever as they are definite scratch and fingerprint magnets. As for space, the Alsvin is smaller than the Toyota Vios in overall size but it’s bigger than the Suzuki Dzire and Mitsubishi Mirage G4, so the Changan is roomy both at the front and back for four average-sized Filipinos. The 390L trunk is fixed but enough for a variety of intended uses.

Brace yourself as the Changan Alsvin’s quite a shocker in terms of tech and safety features. Again, at this price point, the Alsvin already comes with cruise control, a tire pressure monitor, a reverse camera with dynamic guidelines, rear proximity sensors, and a camera for that tricky front right-side corner. The 7-inch infotainment may not have the best graphics out there and the speakers don’t sound exemplary, but at least its Bluetooth function automatically connects with your phone at startup.

All of these toys work well and as intended, so I guess they’re more than enough to make up for the lack of a remote key fob. Design-wise, the interior looks decent too

The story’s the same on the safety front. Dual airbags, standard ABS with EBD, stability control, and hill hold control are all standard in the DCT-equipped variants.

I won’t lie – this car needs a lot of help with its outside noise insulation, but I’d give it a pass for something that most vehicles at this price point lack: tight handling. Don't get me wrong; it isn’t like you’re driving a sports car but beyond the bit of vagueness at the center, the Alsvin’s overall handling is relatively great and controlled. Even on mountain passes, it felt safe tackling hairpins, though body roll and some understeers might spoil the experience. The 1.5-liter, which was the one running the DCT variants, makes 107hp and 145Nm of torque. The output is right around the ballpark of the Vios G, but on-road application felt like it has more. Credit goes to the wet 5-speed dual-clutch automatic gearbox that it comes with, which I think was better than other sedans with 4-speed ATs and CVTs.

One gripe, though – the Alsvin has disc brakes at the front and drums at the rear but the pedal felt mushy and needed adjustment.

The Alsvin comes with idle start/stop function (again, surprise) to assist in fuel efficiency, but I'm not actually a fan of this feature so I switched it off every time during the tests.

With that said, an easy drive around the city at an average speed of 30-40 km/h yielded 10.2 km/l, while a highway sprint with two people on board read 19.7 km/l with the cruise control set at 90 km/h.

Of note, these numbers are on par with the current models in the subcompact sedan segment.

The Alsvin isn’t technically the introduction to the Changan brand. Matter of fact, the Alsvin was introduced with three crossovers during the brand’s launch in 2020. But looking at their prices, the Alsvin is at the forefront of this marque’s offensive, standing as the main attraction with a starting price of P539,000 for the MT variant and ceilings at P639,000 for the Alsvin Platinum CVT that I tested here. The mentioned prices are introductory, so expect them to go up by P40,000 in due time. Its a decently comfortable car with a good amount of features

Considering the ups and downs you’ve read here, I can say the Alsvin best represents what the Changan brand offers – a flurry of features at an extremely affordable price point, so much so that it pleasantly broke my expectations.

The question now is: are you willing to spend your money on an unknown automaker?

As always, that’s all up to you, but you should know that the company behind the Changan brand here in the Philippines is the same one that distributes Hyundai vehicles, so if a foothold in the industry is your concern, you’re practically covered.

ALTERNATIVE REVIEWS TO THE 2023 Changan Alsvin