Used motor oil recycling is a concept that not everyone knows, so we’ve answered some common questions about it.

Contrary to popular belief, motor oil products are not just used in vehicles. They are also utilized in lawnmowers and other power tools or equipment. It is a petroleum-based or synthetic lubricant that is meant to reduce friction and any possible wear and tear of the moving parts. Secondary to that, it also helps remove any impurities in the engine, neutralize the acid, and improve piston ring sealings.

Part of our car’s maintenance is a regular oil change. Sometimes you do it on your own, but did you know that there is such a thing as used motor oil recycling? Yes, there is, and there are a lot of reasons and benefits why you need to do it. However, there are proper ways of doing it, and we here at Philkotse.com have collated some of the essential facts to answer the most commonly asked questions about it.

Change your engine oil and have it recycled

Generally speaking, once we perform an oil change, the first thing that comes to our mind is to dispose of the product. That is because used engine oil is already filled with other chemicals, dirt, metal scrapings, and water. Looking at that information alone, it would have a great effect on the environment when you just throw it out.

In fact, even if you follow the best used motor oil disposal method, it would still have a negative impact on the environment.

The first thing that would be contaminated is waterways simply because oil is also a liquid, and once the waterways are affected, it would have an effect on freshwater and saltwater. The unfortunate fact is that for every quart of motor oil, 250,000 gallons of drinking water can be contaminated. 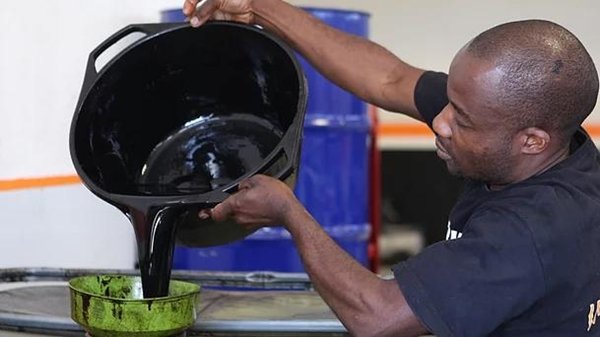 Similarly, when it reaches the ocean, sea creatures can die or get sick, especially since oil is not soluble and can cover the surface, preventing oxygen from entering. So, it’s more like we are eating and drinking oil indirectly.

Additionally, it can also contaminate the sand and stick to the feathers and furs of animals. Used motor oil can also damage your sewer system, which will eventually require you to replace it, which is, of course, very costly. On the contrary, when you decide to recycle your used engine oil, there is also less energy consumption because the process of recycling involves lesser steps than when you make oil from scratch.

2. How to Collect Used Oil Safely?

As we have mentioned earlier, used engine oil is already mixed with toxic chemicals, impurities, and harmful metals. That is why you must make sure that you handle it well, especially when collecting it. Here are some of the things to keep in mind:

Some containers that are not recommended include those that were used to hold milk, paint, solvents, differential oil, and anti-freeze chemicals. Meaning, do not opt for containers that might be possibly contaminated with other forms of chemicals. To sum up, when changing and collecting used motor oil, always make sure that you prevent any form of incidents that will have used motor oil environmental effects, avoid mixing it with other chemicals, and protect yourself from its possible effects.

3. How to Recycle Used Motor Oil?

Unfortunately, you cannot perform used motor oil recycling on your own since the process requires equipment. Likewise, the final product of recycling should also pass certain laboratory testing to ensure that the recycled oil is safe to use.

Again, used oil is loaded with impurities. Recycled or re-refined motor oil should also meet certain stringent refining, compounding, and performing guidelines and standards that have been set forth by authorized agencies. Bring the used motor oil to the right facility

What you can do though is bring it to the proper facilities that accept, buy, and recycle used motor oil. They can be motor parts store, fleet or machine maintenance companies, auto-shops, and gasoline stations. Some companies like Total even accept used oil filters.

4. What are the uses of Recycled Motor Oil?

When you think about used engine oil uses, it would mainly focus on the reproduction of oil, but what kind of oil? First, recycling facilities will clean out the used oil to produce refined fuel oil. In approximation, a gallon of the used motor oil can also produce a gallon of fuel oil.

Also, a gallon of the used oil can yield about 2.5 quarts of lubricating oil and 42 gallons of crude oil. Used engine oil is also re-used as raw materials by petrochemical facilities for them to manufacture other useful petroleum products. Apart from those, you can also utilize used engine oil without any complicated processes and here are two of the recommended ones:

Metal objects in your garage will usually collect rust in the long run, and instead of throwing them out and rendering them useless, try to remove those rusts with the help of used engine oil. All you need to do is dip a steel wool or brush in it and start rubbing the rust off.

Likewise, your handy tools like drills and hand saws would also require cleaning and oiling. Instead of buying special oil products, save some cash and utilize the used engine oil.

Do you have a wooden fence or wooden items in your outdoor living space? Protect it from insects and rot, as well as make it weatherproof with the help of used motor oil. Just add some creosote and spread it on the surface. To help out, here’s a video for you:

Today that we are all facing the ill effects of pollution, the best thing we can do is not to contribute to it. As car owners, used motor oil recycling would be the best move. Beside helping save the environment, it would also be easy on your pockets since you can gain income from selling it to the right facilities, as well as using it as an alternative to common cleaning and lubricating agents.

Hope that this Philkotse.com’s post has given you useful car maintenance tips to become a more responsible car owner.