The all-new Hyundai Lafesta 2018 is offered exclusively for the Chinese market.

The all-new Hyundai Lafesta 2018 has been recently unveiled at the ongoing Beijing International Automotive Exhibition 2018. Interestingly, it is made exclusively for the Chinese market but under an Italian name. It is a sporty yet functional 4-door sedan which is focused on young generation buyers who are seeking for a dynamic-looking yet high-tech car. It also features the newly introduced ‘Sensuous Sportiness’ design of the Korean car manufacturer. The car’s name was inspired by the word “fiesta” of the Italian language. For starters, the Hyundai Lafesta 2018 owns a sporty and glossy look with a distinctive design. The front fascia receives signature Cascading grille of the brand, along with tapered headlamps. It also boasts short rear deck and a coupe-like style which further highlights the impressive profile of the Lafesta.

No photo of the interior has been released but Hyundai did say that the new car will offer a driver-orientated and spacious cabin with quality materials and practical ergonomics, ensuring to serve the driver and occupants with comfort.

Under the hood, the Lafesta is powered by a 1.6L 4-cylinder turbocharged engine which is expected to produce about 197 hp. The engine is mated to a 7-speed dual-clutch gearbox, along with a front-wheel-drive system. 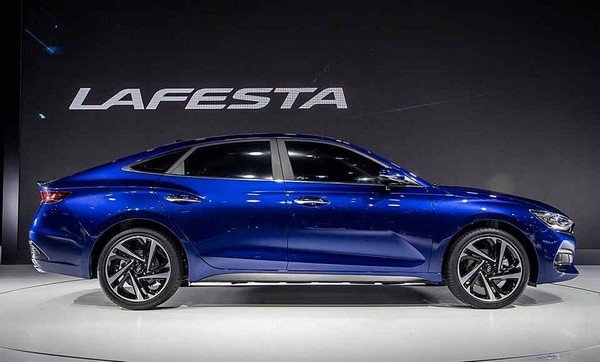 Under the hood, the Lafesta is powered by a 1.6L 4-cylinder turbocharged engine

A lengthy list of driver support systems and safety features equipped for the Hyundai Lafesta 2018 will also be unveiled later when the sedan made its official debut at the end of this year in the Chinese market. According to the latest car news, it remains unsure whether the Lafesta will also be released to other markets outside China.