By now, Subie fans already know that the all-new 2023 Subaru WRX was recently launched in the Philippine market. It remains to be quite sporty with a healthy horsepower bump, and it gets a new exterior design, as well as several new safety features.

That said, this new sporty sedan has one big competitor in the Philippine market. And yes, we’re referring to the Honda Civic Type R, which while priced a bit higher than the new WRX, also fits perfectly in the performance sedan-shaped niche.

So, how does the top-spec 2023 Subaru WRX tS compare against the soon-to-be outgoing Honda Civic Type R? Let’s find out by comparing the two. That said, the WRX Sedan is longer, but the Civic Type R is wider. The Honda model also has a lower height, and it has a longer wheelbase as well. The Civic Type R is also lighter than any of the WRX variants. It has a curb weight of 1,407kg, whereas the lightest WRX, the one with the manual tranny, is 1,515kg.

Do note however that the Civic Type R is a hatchback, whereas the new WRX we’re comparing it with is the sedan model. Regarding exterior equipment, both models come standard with LED headlamps, LED taillights, and front fog lamps. As sporty models, they also both come with the usual sports car accouterments like a spoiler, side skirts, aggressive front and rear bumpers, etc. The Civic Type R does come with more of these bits.

For wheels, the Subaru model rides on an 18-inch set, whereas the Honda gets a larger 20-inch set.

Inside, both the Subaru WRX Sedan and the Honda Civic Type R can seat up to five occupants. Both also provide their drivers with a leather-wrapped steering wheel, a tilt and telescopic steering column, a push-to-start button, etc. For comfort, both of these models also come with automatic air-conditioning. On the Subaru, it comes with rear vents. Also present on the Subaru but absent on the Honda is a sunroof.

In terms of entertainment, the top-spec WRX gets an 11.6-inch touchscreen linked to an 11-piece Harman Kardon sound system. The Civic Type R in turn gets a smaller 7-inch touchscreen connected to an eight-piece speaker system. Both come with Apple CarPlay, Android Auto, Bluetooth, and USB connectivity.

Other features found on both models include power-folding side mirrors, rain-sensing wipers, auto-dimming rearview mirror, among others. Under the hood of the Subaru WRX is a turbocharged 2.4-liter boxer-four gasoline engine. It is capable of making 271 horsepower and 350 Nm of torque. For the WRX tS sedan, it uses a continuously variable transmission (CVT) sending power to all four wheels. Compare that to the Honda Civic Type R, which uses a 2.0-liter turbocharged inline-4 gasoline engine. At maximum, this four-banger can make up to 306 horsepower and 400 Nm of torque. Power is then sent to the car’s front wheels via a six-speed manual gearbox.

As one can see, the Honda model can produce a bit more compared to the Subaru. That’s on top of the fact that the Civic Type R is a fair bit lighter than any of the WRX’s variants. They also have different transmissions, though the WRX’s entry-level variant also comes with a six-speed manual gearbox. The WRX CVT trims also come with a paddle shifter manual mode. Both cars then have disc brakes for all four wheels, and both also come with an electronic parking brake with an auto-brake hold function.

As mentioned earlier, these two vehicles actually belong to different classes. They, after all, use different body types. The Subaru WRX can either be a sedan or a wagon, whereas the Honda Civic Type R is a hatchback. Both also get autonomous emergency braking, lane departure alert, lane keep assist, among others. Of note, these are part of the EyeSight 4 driver assist safety suite which is now available on the new WRX.

For airbags though, the Subaru gets a total of seven while the Honda model gets a total of six. Also, the Subaru model does have some driver-assist features that are not present on the Civic Type R. These include a driver monitoring system, steering responsive headlamps, blind-spot detection, and lead vehicle start alert. To conclude, one can say that the 2023 Subaru WRX is a sedan that also strikes a good balance between being a good daily, and being a sporty vehicle. The Honda Civic Type R in turn leans more towards performance, whilst having some bits that can make it practical. Both do offer a decent amount of space, though the Subaru WRX obviously beats the Civic Type R when it comes to safety. In turn, the Civic Type R’s engine is just beefier compared to the Subie.

So which is the better model? Well, let’s just say that if performance is your priority, get the Honda Civic Type R. If you want a car with a good safety kit but that’s also fun to drive, get the Subaru WRX. The Honda Civic Type R from the rear

For more car comparisons, keep it here on Philkotse. 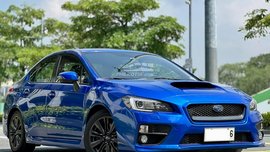 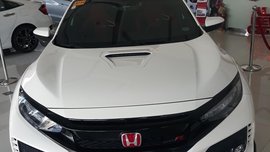