In the Philippine market, Geely in the recent years has definitely come out strong. It now has a lineup of four different models, each of which is targeting particularly competitive segments. It is, however, still relatively new to the local scene.

2021 Geely Okavango Urban Plus: Is it worth the added price? | Philkotse Reviews

To this end, some are yet to be familiar with their models. Some might even not know the difference between the Geely Okavango and the Geely Azkarra.

So to clear that up, an Azakarra vs Okavango comparison is needed. And to make sure it highlights each of the model’s features, we’ll be comparing the top-spec Okavango Urban Plus 1.5 DCT against the Azkarra Luxury 1.5 DCT.

To begin, be aware that these two crossovers belong to different classes. The Okavango is a midsize crossover, whereas the Azkarra is a compact crossover. To this end, the latter is the larger model. Both however are five-door models. The Geely Okavango Urban Plus As said above, the Okavango is clearly larger overall. It also has more ground clearance, and it has a longer wheelbase as well. The Okavango Urban Plus from the side

In terms of exterior equipment though, both are pretty much on par with each other. Both come with LED headlamps, LED turn signal lamps, LED taillights, as well as a rear spoiler. Both models also ride on a set of 18-inch alloy wheels. A view of the Azkarra Luxury's side

The Okavango however, does come with roof rails and front fog lamps. Both of these features are absent on the Azkarra.

Like most midsize models in the local market, the Okavango is able to seat up to seven. The Azkarra meanwhile can seat only five occupants. Inside the Geely Okavango Urban Plus

Both, though, are kitted out with plenty of niceties like a push-to-start button, automatic climate control with rear vents, a digital gauge cluster, electronically adjustable front seats, leather seat covers, among others.

For infotainment headunits though, the Okavango Urban Plus gets a 10.25-inch touchscreen with QDLink Smartphone mirroring, whereas the Azkarra Luxury is equipped with a larger 12.3-inch headunit that also comes with smartphone mirroring. Of note, both Geely vehicles don’t come with Apple CarPlay and Android Auto.

To this end, the smaller vehicle gets a larger touchscreen. For speakers, the one on the Okavango is linked to an eight-piece speaker set, while the one on the Azkarra gets six speakers. Other convenience features found on both the Okavango Urban Plus and the Azkarra Luxury are power-folding side mirrors, power liftgates, and automatic headlamps. The larger model does come with rain-sensing wipers, which are not available on the Azkarra.

Lastly, the Azkarra Luxury also gets a wireless smartphone charger. This nifty little feature though, is absent on the Ovakango Urban Plus.

When comparing the Geely Azkarra vs the Okavango in terms of horsepower, most people will assume that the larger vehicle will get a larger engine. That however, isn’t the case. Note that the Okavango gets a transversely mounted 1.5-liter inline-3 gasoline hybrid engine

That’s because both of these models actually use the same 1.5-liter inline-3 gasoline engine with a mild hybrid system. In both models, even the output figures are identical. Specifically, it can produce up to 190 horsepower and 300 Nm of torque.

Both the Okavango and Azkarra also use the same seven-speed dual-clutch automatic gearbox. The Okavango though, is a front-wheel-drive model, whereas the Azkarra is an all-wheel-drive.

The smaller crossover also gets paddle shifters, while the larger one gets a simpler gear lever for its manual mode. The Azkarra gets the same hybrid engine, but it is longitudinally mounted

Moving on to suspensions, both the Okavango and Azkarra use a MacPherson strut for the front. The larger model does use a torsion beam type rear end, while the Azkarra utilizes a multi-link rear end.

Braking for both models are then handled by disc brakes for all four wheels. Both also come with electronic parking brakes with an auto-hold function.

The Okavango Urban, though, does come with six airbags, while the Azkarra gets seven airbags.

From that comparison above, a car buyer’s choice is now pretty clear cut. If you’re looking for a family car with plenty of room, go for the Okavango. Do you think the Okavango looks great from the rear?

But then if you’re a young and hip bachelor, or if your immediate household is relatively small, then you can do well with the Azkarra Luxury. Or do you prefer the Azkarra's rear end? 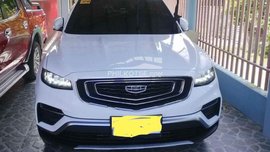