1. 2020 Geely Azkarra vs Ford Territory: Battle of the crossovers

The crossover market in the Philippines is certainly becoming quite populous, and that’s a good thing since there are now more choices for consumers. What’s special about these new crossover models, however, is that their prices are really competitive. Emphasis on competitive.

One example of these feature heavy, but still affordable crossovers is the Ford Territory. It’s made in China, but it bears the same Ford identity that we’ve become familiar with. It looks macho, and it’s quite capable as a daily driver.

Similarly, the Geely Azkarra is also built in China. It’s also filled to the brim with features, and it can also potentially fill in the role of a daily family car. And yeah, it also has the power to back up its handsome good looks.

But which of these two are better specs-wise? To find out, let’s compare the Geely Azkarra Premium with the Ford Territory Titanium+. The former, after all, is only Php 139,000 more expensive than the latter’s price tag. 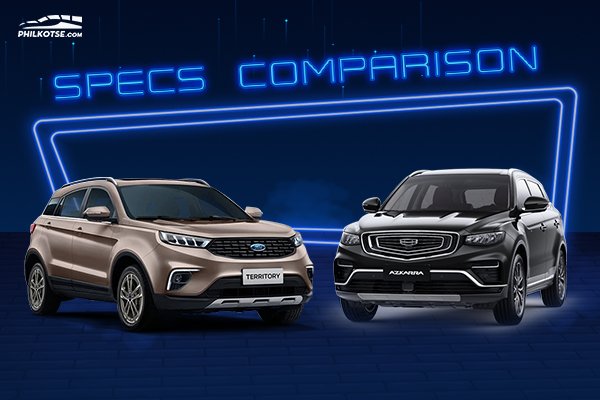 Let's find out which crossover is better on paper 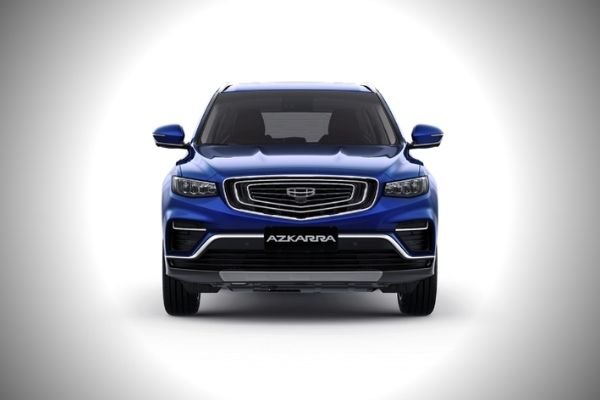 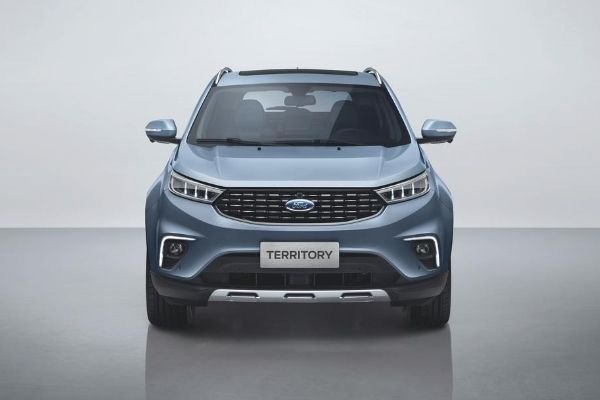 In total, the Ford-branded crossover is longer and wider than the Azkarra. It also has more ground clearance and wheelbase length.

When it comes to exterior features, both the Azkarra Premium and the Territory Titanium+ are very modern looking and very well equipped. Both come with LED headlamps, LED turn signal lamps with side repeaters, 18-inch alloy wheels, and LED taillights. Both crossovers also come standard with a rear spoiler. 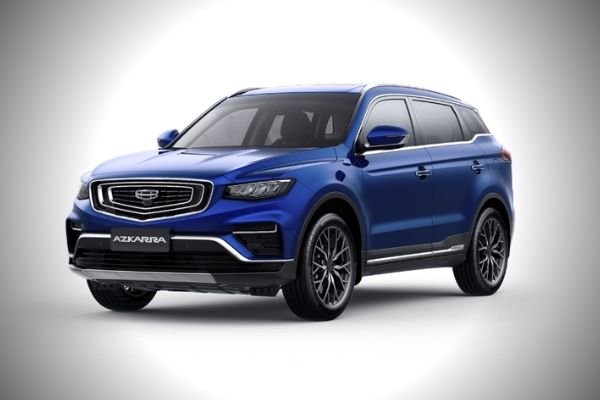 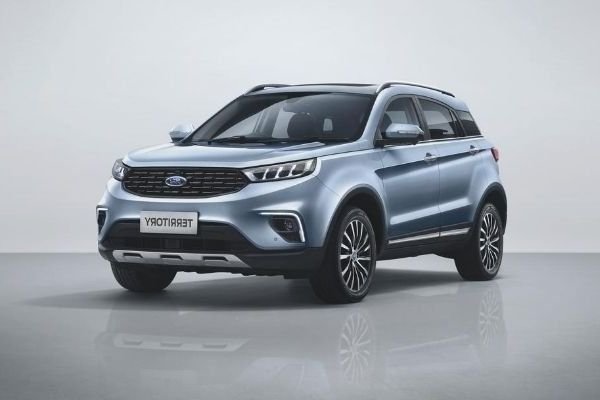 Compare these two crossovers from another angle

The Azkarra Premium, however, is not equipped with front fog lights and roof rails, while the Territory Titanium is.

Moving on to interiors, both the Azkarra Premium and the Territory Titanium+ can comfortably seat five, with room to spare for cargo. The latter’s default cargo space, however, is much larger at 420-liters. Compare that to the Azkarra, which only has 320-liters with its rear seats occupied.

Nevertheless, both of these models come with tilt and telescopic steering wheels, automatic air-conditioning with rear vents, leather-wrapped steering wheels, and electronically adjustable driver’s seats. The Titanium+ however, comes with ambient lighting, and ventilated seats, while the Azkarra Premium does not. Which is the better looking car from the inside?

When it comes to onboard infotainment systems, the Azkarra Premium is equipped with a larger touchscreen measuring at 12.3-inches. The Territory Titanium+ on the other hand has a smaller screen measuring at 10-inches. The latter, however, comes with both Apple CarPlay and Android Auto, whereas the one onboard the Geely uses another smartphone mirroring app. The Territory also has offline navigation, while the Azkarra does not.

Other than that, both of these cars come equipped with Bluetooth connectivity, USB ports, a 12-volt charging port, power-folding side mirrors, a digital trip computer and gauge cluster, as well as a push to start button.

When it comes to powertrains, the Azkarra Premium uses a 1.5-liter inline-3 gasoline mill capable of making up to 175 horsepower and 255 Nm of torque. Power is then sent to the front wheels through a six-speed automatic transmission.

Meanwhile, the Territory Titanium+ is propelled by a 1.5-liter inline-4 gasoline engine that can deliver up to 141 horsepower and 255 Nm of torque. Power is also sent to the front wheels but through a continuously variable transmission.

Overall, the Azkarra is the more powerful crossover. Both however do make the same amount of torque. Interestingly, both can also reach peak torque figures at 1,500 rpm. The Geely-made Crossover however can reach maximum power a little bit later at the rev-range, but it does have 34 horsepower more than the Territory.

Moving over to suspension systems, both of these crossovers come with a MacPherson strut-type front suspension and a multi-link type for the rear. Both also have ventilated disc brakes and solid rear disc brakes.

For safety, both the Azkarra Premium and the Territory Titanium+ are equipped with parking sensors, speed-sensing door locks, a reverse camera, a hill-start start assist, automatic headlamps, as well as a 360-degree camera.

The Ford crossover, however, does come with active parking assist, lane departure warning, blind-spot detection, rain-sensing wipers, and an auto-dimming rearview mirror. The Azkarra in turn lacks those aforementioned features.

Both cars also come with anti-lock braking with electronic brake distribution, a tire pressure monitor, ISOFIX, stability and traction control, as well as a seatbelt reminder. However, the Azkarra comes with seven airbags, while the Territory is equipped with six. Both models also have a security alarm and an engine immobilizer.

Both the Geely Azkarra Premium and the Ford Territory Titanium+ are designed to rock the local crossover market, having very affordable prices relative to their specs.

The Geely branded crossover driver-assist features aren’t as extensive as the Ford Territory. As such, a driver that needs a bit of guidance might gravitate more to the said Ford model. 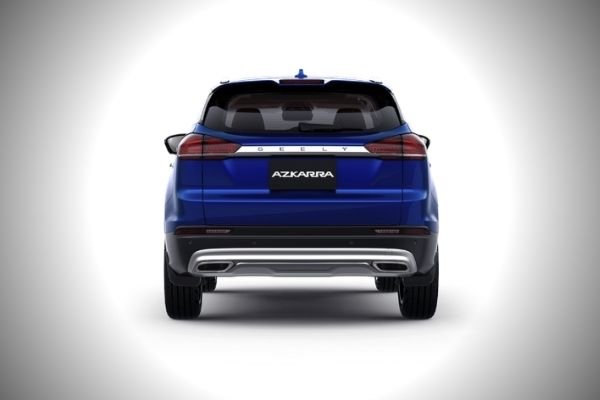 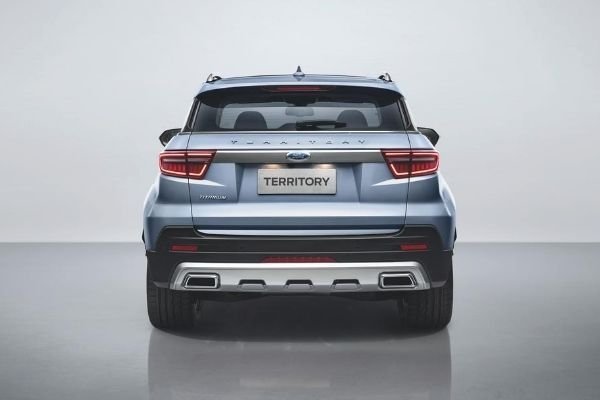 Which rear end tickles your fancy?

Note however that the Azkarra, despite having fewer cylinders, is significantly more powerful than the Territory. It makes 34 horsepower more, and it uses an actual torque converter rather than a CVT. For some, that setup might be the sportier choice.

Did you find this comparison helpful? If it did, keep reading here on Philkotse.com for more. 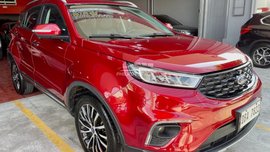