Updated Aug 17, 2020
The new crossover is ready to go up against its rivals in the Philippines. The local crossover arena is probably the most exciting segment as of late. One of the reasons as to why it is an exciting segment is that car brands in the Philippines are offering five-seater crossovers that come with bang-for-the-buck features, good-looking exterior design, premium-looking interior, and a capable engine.

With that in mind, Ford Philippines wants to take advantage of the crossover craze happening in the market right now. Yes, it does offer the EcoSport, but it might just be starting to lose its charm in the market due to the influx of newer and smarter crossovers.

As such, the all-new Ford Territory enters the scene, a five-seater crossover that comes with a striking exterior, a premium-looking interior, loads of safety and tech features, and more.

The all-new Territory is Ford PH’s new challenger in the crossover segment. In terms of size, it sits in between the EcoSport and the Everest, which could also tell that the Territory is filling the gap left by the Escape.

A week before the local launch of the all-new Territory, Ford PH invited us to get a closer look at the vehicle and to test drive it as well, and here’s our Ford Territory review based on that quick drive.

When we first saw the all-new Territory in metal, we realized that the press photos we’ve been looking at for months don’t give justice to how awesome it looks. The Territory’s exterior has the right combination of aggressive, composed, and sharp styling.

From front to back, the Territory is suggesting that it is all set to compete with its segment rivals regardless if it leads to a territorial dispute (that sounds bad, right?). The sharp LED headlights, black grille, and large front bumper give the Territory a composed stance. The side gets straight character lines, which are simple yet pleasing to the eye.

The rear, on the other hand, gets wraparound LED taillights along with a roof spoiler, chrome accents, and a bold bumper. Overall, the all-new Territory’s exterior design is good, and it could certainly go head-to-head with its segment rivals. >>> Related: PH-spec Ford Territory can automatically park by itself

The interior, specifically of the top-spec Titanium+ Territory, is premium-looking and has a dark interior theme with wood-like accents.

However, what caught our attention as soon as we hopped inside the Territory is the massive 10-inch multimedia touchscreen. Mind you, it isn’t just for show as it is responsive to every touch and integrated with Apple CarPlay and Android Auto compatibility. The 10-inch touchscreen also serves as the monitor of the Territory’s 360-degree view feature. Look at that massive multimedia touchscreen

Another thing, when you opt to flash the 360-degree view on the screen, you’ll notice that the camera zooms in to the direction of your selected indicator light.

If you flick it to the left, the camera zooms into the said side, which gives you better visibility and safer turn approach. However, it takes some time to get used to this feature since we prefer to look more at the side mirrors before turning. It comes with a fully-digital instrument cluster

The instrument cluster is also fully-digital, which further adds to the Territory’s smart and techie cabin. The cluster comes with crisp images that make all the essential vehicle information clear and easy to look at.

And oh, the Territory comes with a panoramic moonoof, wireless charging (for Titanium+), and USB ports.

The all-new Ford Territory 2020 is equipped with a 1.5-liter EcoBoost gasoline engine that delivers 141 hp and 225 Nm of torque. The engine is connected to a continuously variable transmission (CVT), which is good news for individuals who have a beef with Ford’s dual-clutch gearbox (DCT). The all-new Ford Territory can sprint

We drove the Territory around BGC, and we can say that it drives good and rides well. When driven in a more relaxed way, the Territory can deliver the right amount of power while driving at the 2,000 rpm mark. The steering is also light allowing you to steer the vehicle easily, a feature that will be beneficial when you’re driving in tight city roads. Forward visibility is also something we liked about the Territory; however, you might find some time to get used to the tech gizmos of the vehicle, which is naturally fine, especially for the younger set of car buyers.

The top-spec Territory comes with blind-spot monitoring. Like the usual, this safety feature sounds off a warning sound whenever it has detected something coming from your blind side. The warning sound is not annoying, which is a plus if you ask us.

Moreover, the Territory can give you the push you need in case you want to pass a slower vehicle in front of you. However, during our drive, we notice a slight delay of a second or two in power delivery, which we think is acceptable. But once it picks up, the Territory can employ some serious sprint especially when you shift it to Sport mode. The all-new Ford Territory is fun to drive

Now, the Territory’s ride comfort is also one of the things we noticed during our drive. It rides well and it can absorb road impacts within reason. The Territory’s ride is also stable when driving through turns, giving you confidence behind the wheel.

Overall, we give a thumbs up for the Territory’s driving performance. It delivers the right amount of power, has a light steering feeling, and it rides well. We can’t wait to test drive the Territory again for a full review so we can assess if our initial impressions remain the same. 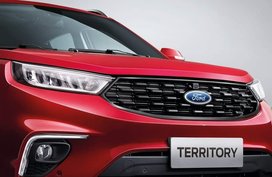 The all-new Ford Territory is definitely a solid choice if you’re looking for a five-seater crossover. It’s loaded with bang-for-the-buck features, good-looking exterior design, premium-looking interior, and a capable engine.

More importantly, the Territory is priced competitively. Its entry-level variant is even cheaper compared to the top-spec EcoSport.

The all-new Ford Territory is now available nationwide and it comes with two variants. The entry-level Trend variant is priced at Php 1,179,000 while the top-spec Territory Titanuim+ comes at Php 1,299,000. So far, the Ford Territory has ticked all the boxes for it to be a serious contender in the tightly contested five-seater crossover segment. Indeed, the Territory is locked and loaded.