Like north or south, these cars have been at the forefront or technology and pop-culture. Will it be hamburgers or sushi.

Cars have running about and the last century years; and it has two badges clashing which is American or Japanese cars. Does it even matter that much? Let’s find out then!

I. American vs Japanese cars: The Cowboy vs the Samurai

Cars and culture are inextricably connected, and they are a reflection of each other. Indelibly as America rose in power, so did their automakers who exported cars. These cars embody the spirit of the Yankee cowboy and the Japanese samurai, that created a new definition for automobiles. Now, to this day it rages; and it begs an answer from “Auto debate: American or Japanese cars?" by Philkotse.com.

Both of these philosophical differences have manifested itself in how their cars are designed. The usual references like fuel efficiency and other specs are relevant, but there must be more to it! Car makers like Mazda, Nissan, Honda, and Subaru have paved the way for ultra-modern cars that descended from lowly options.

Now, are competing in an even playing field with the Americans who have adopted Japanese designs as well. But, American cars have their DNA, still synched to the past despite departure from former designs.

Love it or hate; both cars will have their fans, who’ll swear that one is better over the other! It’s the six-gun versus the blade; and an epic clash of design philosophies, also everything else in between that defines both.

II. Pax Americana and the image of American cars

Popular culture has always associated American cars with certain styles that are linked to certain images. It is not so hard to describe American cars because they represent design cues that make it distinct. To those not familiar it seems ordinary but those who know it will sense the spirit of it!

American cars are one of the most fuel hungry machines ever made on four wheels. If non-American cars are a bit smaller, it’s not the case with Uncle Sam because of the love affair with large engines. Under the hood of a bonafide American car in the seventies; were six-cylinder and eight-cylinder beasts that gulped fuel like no tomorrow. The sound made by their engines were loud, and the pistons pumping is like thunder as large amounts of fuel and air mixed in explosive power. Think of the cars of the fifties and sixties that had huge power plants, as well. Later muscle cars like the Mustang, Dodge Charger, and the classic Corvette to the one later produced in the seventies. America's obsession with powerful engines continues to this day, but incomes large SUVs.

>>> Does a small engine mean fuel efficiency? Click to find the answer.

If it’s big; then it’s the full-sized American sedans and sports utility vehicles that rule roads in America. Ever since the forties to now; the love affair with size is apparent to this day. Their large designs before emphasized a huge chassis and it can seat more than five big adults!

Accents like wings and protruding shapes of light, with huge grilles, were just a visual feast of pure size. Designs like the Batmobile and the Green Hornets car were a study in an obsession with size. Now, smaller designs are cropping up due to environmentalism. Less fuel burned that means fewer greenhouse gases too. 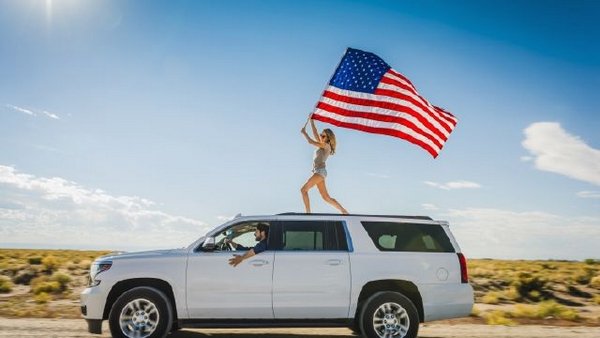 Production of large pickup trucks that are either four or five-litre engines still proliferates as a remainder of this obsession.

If modern cars are meant to crumple to protect the occupants, not the American car of yesteryears. A long time ago; a car was made to be tough and survive collisions if possible. But later research revealed a rigid chassis was deadly and can kill occupants.

The bumpers were made of metal and were made to be very sturdy. Rigid metals were used for the car body; and it was a ladder frame, not a uni-body like for today’s cars. Their cars are made tough, and their chassis even survived till restoration. American cars are made to last longer and not rust away easily like modern cars. They were so heavy and needed lots of fuel, compared to other cars for sale today.

4. No fancy electronics but analogue gauges

These cars were simple to use and were easy to repair without fancy equipment. Keeping it simple and sparse was important to have a minimalist cabin. American cars before to now, still have certain lineage throwbacks which are most apparent in the rebirth of American muscle cars like the Ford Mustang. In the “auto debate: American or Japanese cars?”, we need to get facts!

If the Cowboys are loud and rowdy, not the cars of the Rising sun. The Japanese cars also have priorities over American cars that made them such desirable cars to buy. They are the opposite because they are modern, efficient, and a well-oiled machine. Images of the Nissan Fairlady Z, Toyota Celica, and the Toyota 2000 GT were examples of cars that contrasted the Muscle cars of the seventies.

If the Cowboys are loud and rowdy, not the cars of the Rising sun

1. Large engines does not equate power

While American cars were obsessing over large cylinder engines; the Japanese were trying out new technologies. Japanese cars were fuel efficient and experimented with new technologies to produce lighter and powerful engines. All the engines designed were primed for maximum horsepower and torque in nearly compact size to fit in smaller bodies.

Japanese cars weren’t in their apex but still were considered efficient and powerful as well. The fuel crisis prompted the need for a smaller engine, and they led the way.

Housing these engines were sleek and aerodynamic car shapes that were far different than American muscle. Japanese engineers made fast two or four-seater coupes or top downs that were fast! Toyota produced the classic Corolla which became the best-selling compact sedan until it was phased out. Honda produced the classic Civic of the nineties and other memorable ones like the Prelude too. Like the samurai blade of old, Japanese cars will have these design cues for a distinct look!

To a certain degree; the move to more fuel efficiency was more successful on Japanese cars than on American cars. This led to designing smaller cars that were lightweight and may have had airbags installed already, by this time. Japanese weren’t afraid to try new manufacture methods and has led the way since then. From the instrumentation, ergonomics to major auto systems were tested and designed for better efficiency.

Japanese design demands cars that are efficient and utilize car technology to make it better. From then, till now all Japanese cars will carry distinct evolutionary paths that are dictated by the science and research of yesterday and today.

Has this “Auto debate: American or Japanese cars?” cleared things up? These design philosophies are idiosyncratic and have their benefits and drawbacks that defines what they are. Whether it’s an American or Japanese car, they are now on common ground because of common car research gained. It all gets down to personal choice, so it’s that simple. It comes down to the brute horsepower and fuel efficiency of both makes.

Should you want to widen your choices, you can add more brands to your comparison like Korean and European makes besides those two aforementioned ones to see whether Japanese, Korean, European or American cars are worth buying.

top car brands in the Philippines Amercan or Japanese cars