What happens when your car is struck by lightning?

No need to be shocked when it strikes while you’re on the road.

With the onset of the rainy season, it becomes even more important for drivers of all ages (and experience levels) to pack a little extra caution before driving in the wet.

We should all be familiar with the motions by now, and going through them should be second nature. Like checking your tires to see if they still have enough tread left, the better to expel water as you go and prevent hydroplaning. Then there’s inspecting your windshield and window glass to make sure you can still see clearly through them. Or making sure that all your lights work, especially the headlights and turn signals, so that other drivers can easily see you even in a sudden downpour or fog. But even if we’d like to think that we’ve got wet weather driving covered, Mother Nature can still pull a few surprises up her sleeve. One of them is lightning, one of the most beautiful spectacles yet deadliest natural phenomena on Earth. Car struck by lighting is not a rare incident on the road at all.

Now, it’s easy to put two and two together and assume the worst. After all, lightning is a whole lot more electricity than you’d be readily comfortable with, and electricity is easily conducted through metal, which is what your car is made of, presumably. But should you start putting off driving in a thunderstorm and just wait for the skies to clear? Not necessarily.

Lightning, if it isn’t already obvious by now, is a large electric current. But to understand how lightning forms, we need to take a look at the water cycle.

The Philippines has a tropical climate, which means we’re no stranger to hot weather. When the sun is out and heats the ground, the air above the ground grows hotter as well. This evaporates moisture on the surface, be it that fallen ice cube on the pavement, standing water on your roof gutter, or even the largest bodies of water around like rivers, lakes and seas.

With the moisture drying up on account of the heat it absorbed, it becomes water vapor, making it light enough to ascend freely into the atmosphere. Just as the heat on the surface of the earth made the water vapor rise towards the sky, the increasingly colder temperatures on its way up will cause the water vapor to gradually revert to its liquid form as well.

We usually notice cooled-down water vapor in the sky as clouds. They’re certainly pretty to look at during sunny days, but gather enough water vapor and you’ll get a cloud that’s just about ready to burst with ice-cold water.

A cloud contains millions and millions of suspended water droplets and ice, with the continuous process of evaporation and condensation inevitably making these molecules collide with each other; think of when the MRT tries to unload and load passengers at each station during rush hour. 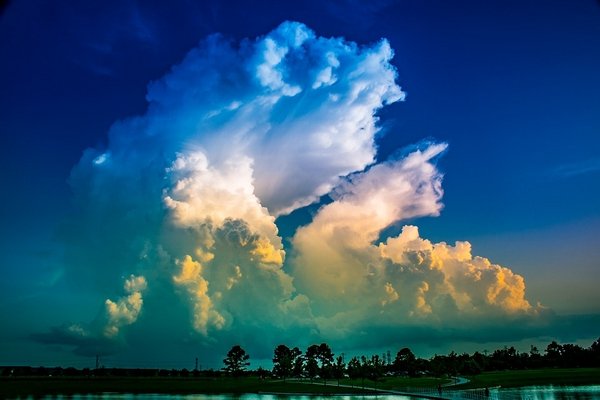 Clouds look puffy, but they conceal a battle between positive and negative electrical charges

If the positive and negative charges within the cloud get large enough, a huge spark – lightning – can travel between them, on account of the electric field involved in the charge separation process. As the cloud continues to get even bigger with evaporation and condensation, this electric field grows in strength, so much that electrons on the surface of the ground are repelled by the negative charge at the bottom of the cloud. With the ground now having a strong positive charge, the ideal conditions are created for it to be contacted by the negatively-charged cloud bottom. This enables lightning to travel from the cloud to the ground, posing a very real danger to anything and anyone on the surface, including you and your car.

>>> Find more safety tips to survive driving in the Philippines on Philkotse.com

2. What happens when my car is struck by lightning?

We were all taught to avoid open fields in a thunderstorm, implying that only structures of considerable height from the surface of the ground can get hit by a lightning strike. The truth is, lightning’s path is still far from predictable; while taller objects are more likely to get hit directly, the area around them is also susceptible. This explains why some cars get hit by lightning, even when they’re surrounded by skyscrapers or even larger vehicles on the highway.

When lightning (or electricity in general) strikes an object made of conducting material, the current’s higher frequencies will cause it to be carried on the outside of this material; it’s known as the skin effect, because the current seems to travel along the surface, or skin, of the object. This means that when lightning hits your car, the electricity only flows around the body outside and into the ground, acting like a Faraday cage. The car’s metal doors and glass windows will protect the occupants inside from the worst of the electrical charge, which can be lethal in many cases. Take note that this only applies to vehicles with metal roofs, or hardtops. Convertibles, with their cloth or canvas roofing, provide no such protection, and will likely leave you vulnerable to a direct lightning strike. There is presumably a similar level of risk for cars with carbon fiber or fiberglass roofs. 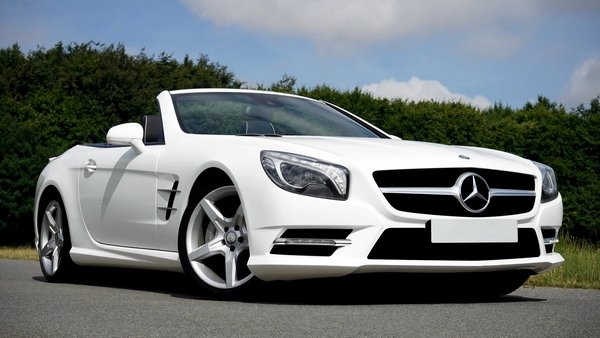 Convertibles won't be able to protect you from lightning strikes

The effects of a lightning striking a car vary greatly, from little or no signs at all to extensive damage on the exterior. Given that the force of a lightning strike is largely limited to the outside of the car, some of the external damage it might sustain include arcing and pitting, which result in tiny craters, welds, burn marks, peeling and rusting on the surface.

Now, even if you are largely shielded from the damaging effects of lightning, your car’s components may not be as lucky. Some of the electrical charge may flow through to the electrical system, overloading it and damaging features such as your radio, navigation systems and plug-in accessories like mobile phone chargers and dashcams.

Even basic features such as the lights, steering, brakes and the engine can be compromised. After a direct hit, your car might run for a few more seconds, even as the systems shut down. Then it will abruptly stop, as if stalling. In some cases, the lightning strike can blow out some or all of the car’s tires, or even set the car on fire by igniting fuel in the tank.

There has been at least one instance where a car was struck by lightning, shutting down the engine and causing the airbags to deploy, leaving the driver with bruised ribs. An especially bad lightning strike can reduce your car to this

Just because lightning is unpredictable doesn’t mean you’ll have to cower in fear every time the rains come. Fact is, there are reasons why we do have to be out on the road, despite the weather.

Say that you happen to be driving along the open road when you noticed that the sky’s getting dark. You think about seeking shelter, but there isn’t a single roof on either side of the road. Then you hear the rumble of thunder in the distance, which could signal a lightning strike at any time.

First, you’ll need to stay calm and listen. Estimate how far a brewing storm is from your location by counting the seconds between a flash of lightning that you see and the thunder that comes afterward. Three seconds between the lightning and the thunder represents approximately one kilometer. The closer the interval, the nearer you are to the storm, and the more urgent it is for you to get to a safe place.

Second, keep all the windows closed. Remember that lightning travels along the outside surface of a closed object, so don’t leave any openings where the lightning bolt can pass through directly and hit you. 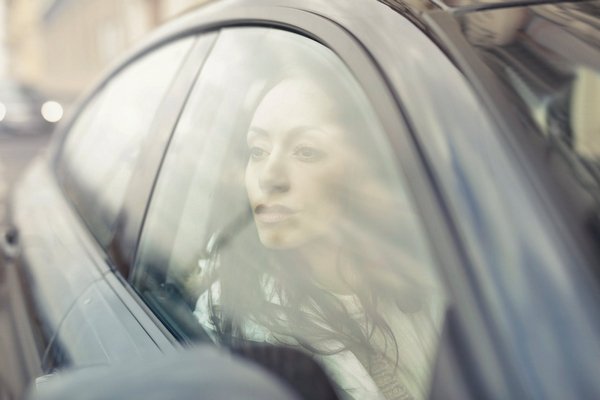 Always keep doors and windows closed during a thunderstorm

Third, if you find that the storm has worsened before you’ve reached the safety of the indoors, park your car at the side of the road and switch off the ignition. Considering that a lightning strike is very much capable of incapacitating your car, it would be best if you’re at a standstill rather than in motion, where the loss of your engine, brakes and steering will have even more disastrous consequences.

Fourth, avoid touching anything metallic inside the car, including the door handles and your seatbelt buckles. Some of the electrical charge from lightning can still find its way inside, passing through the foot pedals, door handles, steering column and shift lever. Put your hands on your lap, away from the steering wheel. Remove your feet from the pedals, and do not fiddle with any electronic accessory that is connected to the car’s electrical system. 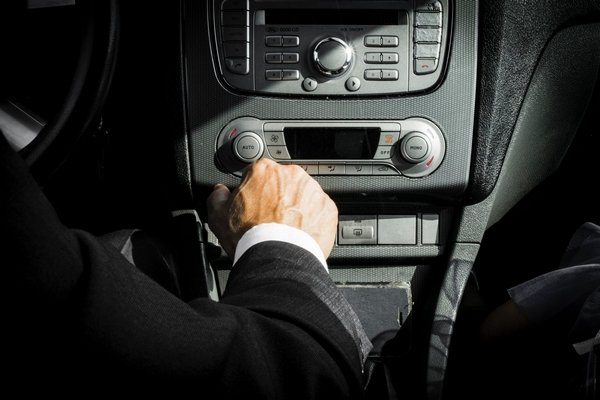 At best, the storm will just pass right over you without incident, and you can go on your merry way afterward. At worst, your car will be the target of a direct lightning strike, so give it ample time to make sure that the current has completely gone to the ground before either attempting to start your car, or going outside to seek help.

Now, even if the car does manage to start and have no visible marks, it might be a good idea to subject the car to a diagnostic test to determine if there’s any electrical damage. As far as insurance claims go, a comprehensive policy that includes Acts of Nature coverage can help pay for damage sustained during a lightning strike.

The reality of driving is that we need to be constantly on the lookout for dangers not only on the road, but from the skies too. Hopefully, we’ll all be able to take those extra steps to make sure that we’ll live long enough to savor another driving day.

>>> You may also like to read: Important earthquake safety tips for Filipino drivers