Eating behind the wheel: Bad driving habit you should quit doing

On roads both here and overseas, food and driving just don’t mix.

Apart from cars, what’s one thing that a lot of Pinoys probably can’t get enough of? Food.

And coupled our harried lifestyles, it’s no wonder that many of us resort to combining the two.

Rushing to meet a deadline? Running late for an appointment? Nothing to do on an hour-long traffic jam? We eat. On the go.

On the one hand, it fulfils a visceral need, namely hunger. We’re able to tame it for the time being, having loaded ourselves with nourishment (or what passes for it) to get by just a little longer, without the time-consuming chore of having to find a parking space, then waiting in line for the cashier to take our order, and THEN waiting some more for the food to actually arrive.

Eating behind the wheel: Bad driving habit you should quit doing

At the other end of the spectrum, it’s not something to be encouraged, however normal (or even justified) it sounds. We already have a law against distracted driving, to be sure, but it mostly refers to the use of electronic devices while driving. The language of this new rule does make it clear that it’s not limiting the definition of driving distractions to just smartphones, but still, it’s an oversight that many motorists will likely be willing to exploit.

But food is something that’s supposed to keep us alive, right? How can it possibly pose a danger to ourselves and others? There are several reasons why Philkotse.com believes it’s potentially a life-threatening gamble:

1. Eating requires the use of your hands, and even just using one hand to hold that sandwich, pack of fries or bag of chips is already one hand away from the steering wheel. Fast food items are especially notorious in that they come in packaging that requires unfolding or unwrapping. That catsup sachet you’re holding for your burger, or the hoisin sauce for your bola-bola siopao? You’d have to rip it open, and since you’re dealing with a liquid condiment, chances are it’s going to spray or spill somewhere inconvenient. Now, assuming that you managed to completely wolf down your chow before the light turns to green at the intersection, you’d still have to deal with oily hands that not only reduce your grip on the steering wheel or the shift lever, they also leave a very unsavoury sensation that’s bound to compromise your attention and focus. 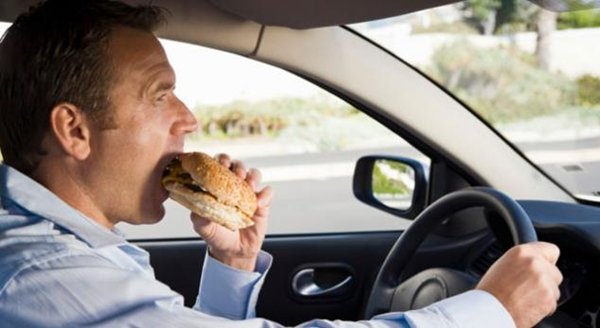 2. Even if you don’t eat, you’ll still be at risk if your passengers do. Sounds and smells of passengers eating can easily break your concentration as you try to focus on the road ahead. Filipinos are known for offering food to anyone in sight, and it will be mighty hard to resist someone presenting you with a piece of your favorite potato chips, some french fries, a bite from a chocolate bar or even a spoonful of yoghurt. Sure they mean well, but you know you shouldn’t give in for everyone’s safety. And the feeling of being left out while everyone else is chewing and slurping happily can be too hard to resist. And the minute you angle your head towards the person offering you that tantalizing bite, whether to the side or behind, you immediately take your eyes away from the road. Even if you don’t eat, you’ll still be at risk if your passengers do

3. If you think drinks are better, think again. Anticipating a long journey ahead, you go and order the largest size beverage on your drive-thru, or bring along a sizeable water bottle to quench your thirst in soul-crushing traffic. Once you bring them to your mouth for a drink, those big containers can easily obstruct your view of the road. Or maybe your drink came with a straw, which would then need to be inserted into small openings on the lid, taking a few precious seconds off the road. A softdrink in can might be resting on your cup holder, but it can’t be resealed, with its contents sloshing around and spilling with a sudden maneuver such as hard braking. A bottled beverage can be resealed, but only if you’re able to successfully thread the cap on the bottle, if you don’t manage to lose it first under the seat. 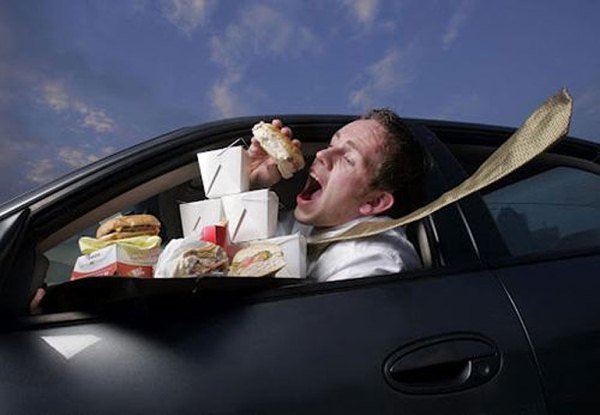 In the US, there are no hard restrictions yet on drinking and driving

4. Packaged food and drink will inevitably leave empty wrappers, cartons, cups, utensils and used tissues scattered around the cabin. If you can’t be bothered to stop by someplace and eat, then you certainly won’t be able to get rid of all that clutter, which means you’ll have to endure its presence for the whole trip. Worse, some of that mess might even find its way to your dashboard (where it will obstruct your line of sight) or the floor area (where it can interfere with the operation of your car’s pedals).

If we’re still largely on the fence regarding eating food while actively operating a motor vehicle, consider the following practices in other countries:

In the UK, it is not explicitly illegal to eat behind the wheel, but police can still impose penalty points and fines (£100) on motorists who are caught dining and driving. A study done by Leeds University showed that drivers who ate while driving were 44% slower than normal, while those who took a sip were 22% slower and 18% more likely to be erratic on the lane. Rule 148 of the UK Highway Code explicitly tells drivers to avoid distractions such as food and drink when handling a motor vehicle, since “safe driving and riding needs concentration”. Additionally, if the police determine that a driver has lost control of the vehicle while eating behind the wheel, they can file charges of reckless driving. In the UK, it is not explicitly illegal to eat behind the wheel, but police can still impose penalty points and fines on motorists

Likewise, eating or drinking while driving isn’t illegal in Dubai, but local police have been using Twitter to encourage motorists to stop the practice. There were reportedly many stories of drivers spilling coffee or ketchup on their shirts and becoming distracted as a result, an extreme case being a commercial driver who choked on his food and lost control of his vehicle.

In the US, there are no hard restrictions yet on drinking and driving, similar to the previous examples. But some states are said to be changing that, by including drinking and driving on the list of distracting driving practices for their particular areas of jurisdiction. For instance, a $100 fine is already being imposed in Huron, South Dakota for drivers who are caught eating or drinking while driving. The National Highway Traffic and Safety Administration (NHTSA) has determined that handling food while driving can actually be more dangerous than using an electronic device behind the wheel; a study they conducted found that collision risks increased by 80% for people who ate and drove and the same time. Driver risk management company Lytx also conducted a study in 2014, concluding that people who eat and drink while driving are more than three times likely to be involved in a car crash. And another study conducted by Exxon Mobil revealed that 70 percent of drivers actually ate while operating a motor vehicle, and 83 percent drank beverages while driving. Food-related accidents mostly happen in the morning, when people struggle with eating breakfast on their way to work while maintaining their appearance. This supposedly doubles when the driver operates a manual transmission vehicle, on account of the additional dexterity required to eat, shift and steer. Dining and driving increases the risk of accidents

It turns out that there is an emerging global trend correlating eating and drinking behind the wheel with an increased likelihood in vehicular accidents. What’s ironic, however, is that we’re also seeing an increase in fast food outlets, whose drive-thru lanes offer a sort of incentive for motorists to, uh, multitask as they deal with an already complex enough activity such as driving.

Fortunately, there are steps you can take to lessen your risk of accidents due to this bad driving habit:

First, prioritize food before getting into the car. Make time for a proper meal or snack that you can fully enjoy without having to be distracted by another activity.

Second, avoid keeping food inside your car, especially within reach where the temptation is just too great to ignore. If it becomes necessary to bring food but not urgent enough for you to consume it right away, make it difficult for you to reach by keeping it somewhere inaccessible, such as the backseat or even the trunk/cargo area.

Avoid keeping food inside your car

Third, when you really can’t avoid passing by a drive thru to order some grub, take a few minutes to chow down on the restaurant’s parking area. You won’t have to leave your car, and parking leaves you with one less thing to worry about before you enjoy your meal. When you’re done, there are garbage bins nearby where you can readily throw your trash, and get your hands cleaned up while you’re at it before you grab the steering wheel.

Fourth, if bringing drinks is a must to keep you from getting dehydrated, try using slimmer beverage containers that can be quickly opened with one hand, such as flip-up or push-button nozzles. They will reduce the time you need to take your eyes off the road, and won’t block your vision as much as larger containers do. Also, the smaller size reduces fatigue on your free hand.

We’re all looking for better ways to make the most of our waking hours on the road, especially with the seemingly worsening traffic situation in the country, which is why we’re often constrained to combine dining and driving. But the shortcuts we come up with shouldn’t compromise our safety while driving and that of everyone else. Yes, we mean you should get out of this bad driving habit as soon as possible.