Japanese drivers always show good manners behind the wheel like flashing the headlight to thank.

The Japanese are famous for their politeness and dedicated work ethics. They reflect in everyday life in every aspect. Even in their styles of driving, they have a lot for us to emulate. Check out 5 tactful acts every Japanese driver does that we should learn from.

1. Flashing the headlight to say thanks for giving way

While many drivers usually flash the headlights in order to ask a slow moving vehicle for overtaking or to remind vehicles in the opposite lane to use the low beam light instead of high beam light in city roads.

However, in Japan, flashing lights has a different, more polite meaning. When a driver wants to enter the lane, he/she will first signal, and if other drivers allow it, he/she will flash the headlight 2 times in order to thank. 2. Taxi drivers patiently getting in line to wait for passengers

In Japan, thanks to advanced public transport systems, people can go to almost anywhere with a low transportation cost. However, there is still a lot of demand for taxi service as for its speed and convenience. Especially in the night, when parts of the public transport system are closed and there is less traffic on the road, getting a cab is an optimum choice to travel in the city. You can go to a taxi stop or flag down a cab on the roadside where it is allowed to stop. If you stay in a hotel, you can ask receptionists for help to catch a taxi or call directly to get one. Japanese taxi driver are famous for their helpfulness and politeness

The big difference between cab drivers in Japan and other countries is that Japanese cab drivers are very nice. They do not rush to “catch” a customer, but instead, they move patiently in a line to wait for passengers in taxi stops. They are friendly, polite drivers and most importantly, they drive safely.

3. Taxis being equipped with automatic doors

Taxi passengers in Japan don’t have to open or close the door when getting in and out of the cab. The drivers only need to use a button to automatically open the door for passengers to bring their luggage on the car, and then use the button to close the door. This not only reveals the extensive use of technology in daily life in Japan but also shows how much the Japanese appreciate their time. Wasting a few seconds could be no less than a crime in this country. 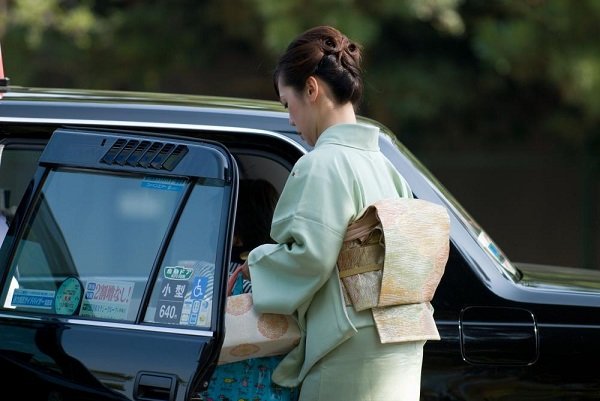 No honking when driving is part of the transportation culture in not only Japan but also in other developed societies. In traffic jams, drivers will stand by waiting in silence instead of pressing the car horn furiously or trying to overtake the road. Japanese drivers persist in not honking under any circumstances

Giving way to pedestrians is a respectable driving habit of Japanese drivers. It comes partly from the trademark discipline and politeness in their culture, and partly from the fact that there are so many pedestrians on their streets. The majority of Japanese people use public transport, so people walking on and passing through the street is, without a doubt, a common sight in this country. There are good habits we should adopt and there are also bad habit we should get rid of. Read our earlier article on 10 bad driving habits you need to discard right now to be a better driver behind the wheel.