Smuggled cars in the Philippines worth P27 million destroyed in Cagayan

In order to keep the domestic auto sales at a good level, President Rodrigo Duterte has implemented severe measures to smuggled cars in the Philippines by having these illegally imported vehicles crashed by the tracks of a bulldozer. In July, at a ceremony gathering attentions of television cameras and media, his administration implemented a big gun about crushing 30 smuggled cars. This time, it comes more disastrous as 14 luxury vehicles (cost a total of around P27 million) were chosen to be the next car-crushing including the BMW Z1, Porsche 911 GT3, BMW Alpina B12, two-door Mercedes G-Wagen and Maserati Quattroporte. 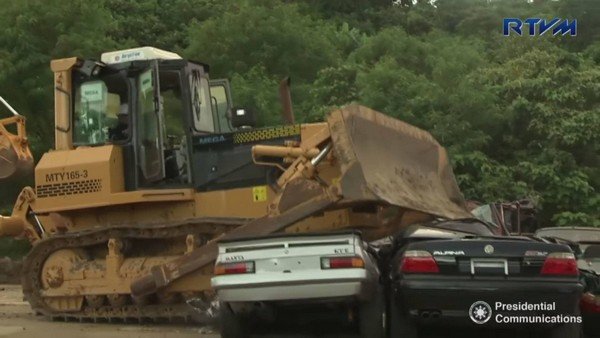 Last month, the administration implemented a big gun about crushing 30 smuggled cars in the Philippines

This action of Mr. Duterte’s administration has stirred up streams of conflicting opinions. Some say that this is an appropriate punishment for car smugglers, contributing to erase this serious crime in the country. On the other hand, some believe that it would be more effective and beneficial to put these smuggled cars for sale, and use that money to encourage the investment in law enforcement. This action of Mr. Duterte’s administration has stirred up streams of conflicting opinions

But no matter which side you are on, the government still says there will be more batches of smuggled cars in the Philippines to receive such punishment regardless of public opinion.

How about you? Let us know your personal view on this matter.