Mercedes-Benz Sprinter 2019 to be unveiled on February 6th

We have not seen any major changes for over a decade.

The current Mercedes-Benz Sprinter still wears the coat of 2006. Despite some minor tweaks for 2014 model, the van is still dated. We all know it will certainly be revamped. Thankfully, an all-new Mercedes-Benz Sprinter 2019 is coming sooner than you’ve expected. Yes, next Tuesday, on February 6, this renowned van will officially be making its debut. Next Tuesday, on February 6, this renowned van will officially be making its debut

We do not expect too much from this people carrier in terms of exterior. In general, it is still be a tall “warehouse”. However, the recent teaser video has shown us a chunkier front fascia with thinner and more streamlined headlights. In the meantime, spy photos suggest a bolder front grille which perfectly combines with the van’s styling cues. Getting inside, an analog gauge cluster for driver has already been unveiled. Even though there is no glass cockpit, a massive infotainment screen is now located in the dashboard center and nearby is a 3-spoke steering wheel with control buttons. Largely, the cabin is settled on a minimalist approach yet we see here and there some touches of luxury of a true Merc. On top of that, the Sprinter also exudes the functionality for users with a state-of-the-art Pro Connect Services that keeps the fleet managers and the driver connected through the Internet. 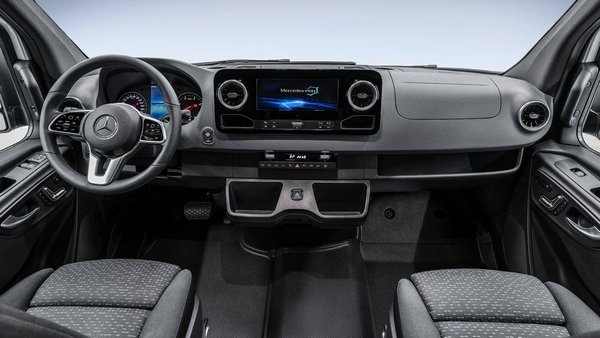 Getting inside, an analog gauge cluster for driver has already been unveiled

For further details as well as official price, we have to wait till its world premiere. Decidedly, the Mercedes-Benz Sprinter 2019 will be worth the wait.

>>> Click to catch updated with latest car news in the world