The next-gen Suzuki Ertiga 2018 is expected to be launched in India this August.

However, the two models still have their own distinction. Accordingly, the spied Suzuki Ertiga 2018 (known as Maruti Ertiga in India) gets a larger touchscreen with a 7’’ Smartplay unit, an automatic A/C system and new controls instead of the manual air-conditioning knobs in the Indonesia-spec unit. Besides, the seat cloth is also dissimilar while the steering wheel is now not adorned with a faux wood decor. The version on the photo here gets an automatic gearbox which is predicted to be a four-speed torque converter mated to a fresh 1.5L K15B petrol powertrain. Besides, in the next year, a new option for the engine - a 1.5L diesel unit will be available in the lineup. At the launching time, the all-new Suzuki Ertiga 2018 is still powered by a 1.3L DDiS 200 diesel powertrain as ongoing model.

The next-gen Ertiga comes with a fresh exterior which features a completely new design and a bigger dimension. Its length and width are 99 mm and 40 mm greater than the ongoing model, respectively. The front fascia receives double barrel headlights adorned with projector unit which seem to have LED lights. Moving to the rear, the Suzuki Ertiga 2018 is decorated with L-shape tail lamps which may also get LED lighting, the C-pillar with little black portion, earning the MPV a magical effect of a floating roof. 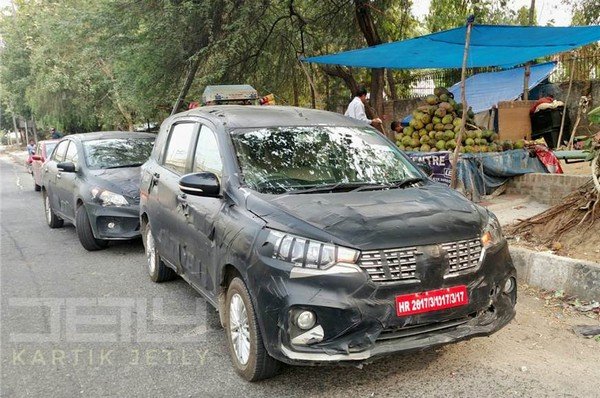 The next-gen Ertiga comes with a fresh exterior