There’s a good reason why Toyota Motor Philippines has been at the top spot for quite some time – the company boasts an extensive lineup that caters to every Filipino buyer. From small hatchbacks to light-duty commercial vehicles, TMP has one for you.

But the company never ventured into the growing subcompact crossover segment in the Philippines – at least not until today.

After several teasers and subsequent opening of reservation lanes, Toyota now has a small crossover to contend against the likes of the Ford EcoSport, Kia Stonic, and Chery Tiggo 2 Pro. I’ve had the chance to test one for a few hours before the official launch, and here’s my first impressions review of the top-spec 2022 Toyota Raize Turbo CVT.

The Raize didn’t impress me when I first saw the model in photos back in 2020. The rebadged Daihatsu Rocky looked like a Wigo that gained weight after the holidays, or a baby RAV4 – depends on how you see it. A view of the Toyota Raize's side

Upon seeing it in the metal, that notion changed a bit. It’s actually designed well, with the two-tone paint of the Turbo variant evoking a sense of style. The variant-exclusive Turquoise Mica Metallic made the Raize stand out in the sea of small high-riders, boding well with the crossover’s youthful appeal. Plus points for Toyota for adding LEDs in top-spec trims, probably a dealbreaker in this day and age. The rear has plenty of angular details

The Raize looks good in a general kind of sense – much like the popular kids back in school, or what we call the crush ng bayan. Have you seen how these kids grow up to be lately?

As you would have guessed, the Raize is pint-sized even in the metal. It’s even smaller than the Kia Stonic in all aspects, which translates to a pretty cramped cabin. Taller individuals will have to think twice before buying this car, especially in the rear cabin. The rear cabin might be best for children and younger teens

But just like how it is with the Wigo, the Raize’s raised seats and relatively tall roof somehow allow a quite reasonable legroom and headroom for average-sized individuals. Just don’t expect too much personal space if you plan to fill it up with five passengers. The cargo area’s not much, but it’s better than the measly trunk of the Wigo.

Another talking point about the Raize is the quality of materials used. Kudos to Toyota for not using shiny piano black plastics to spruce up the cabin. Rather, textures are found to at least mask the incessant use of hard plastics – understandable for this price point but a bit arguable for the top-spec variant that crossed the million-peso mark. At least the steering wheel’s leather for the Turbo and G variants, and the seats are upholstered in synthetic cowhide and soft fabric for the Turbo trim that you see here. A peek into the Raize's cockpit

Also laudable for Toyota is a bevy of cubbyholes found at the front. But probably the best part is the pair of cupholders positioned right in front of the A/C vents by the window. It’s perfect for keeping cold beverages, well, cold. And yes, you can close the air vent in case you’re using them for your hot drinks.

As an entry-level crossover, you shouldn’t expect much from the Raize in terms of tech features, but that doesn’t mean that it’s stripped to bare bones. The higher Turbo and G trims come with expected features such as keyless smart entry and push-start ignition, speed-sending door locks, power windows, auto air-conditioning, and 9-inch infotainment with Apple CarPlay and Android Auto. The head unit produces sound from an average-sounding six-speaker setup. However, the Raize stands out in terms of safety and security amenities. The entire range is equipped with dual airbags, a seatbelt reminder, ABS, hill-start assist, rear parking sensors, immobilizer, and vehicle stability control.

As expected, the range-topping Turbo variant gets all the goodies, namely six airbags, front and rear sensors, an alarm, and a rear camera with guidelines. However, the presence of a blind-spot monitor and rear cross-traffic alert system surprised me. These two are actually practical for this body type that gets limited rear visibility especially when full. Another view of the Raize's cockpit

The industry’s addiction to turbocharged three-cylinder engines has transpired with the Toyota Raize. The one I tested was the Turbo variant, powered by a force-inducted 1.0-liter gasoline engine that makes 97hp and 140Nm of torque. Those numbers don’t sound much but lest we forget, the Raize is a small vehicle that weighs only around 1,040 kilograms.

Of note, the similarly equipped turbocharged Nissan Almera produces around the same amount of power and weighs almost as much (1,090 kgs), and I lauded that car for its ability to provide a pleasant, sporty drive. 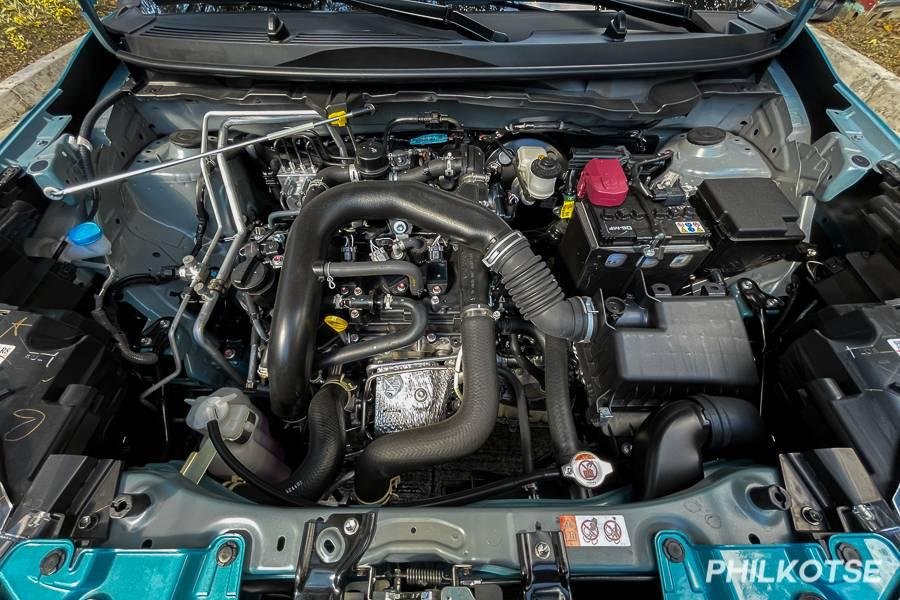 That said, this powertrain setup was more than enough to pull the Raize up to its pace during my tests. With only one passenger aboard, the Raize can get up to speed quickly, although I can imagine the CVT limiting this performance on longer overtakes. But for menial tasks, it was a joy to drive.

Handling’s quite notable as well. The steering wasn’t too light, though I needed more time to test the car’s driving manners for me to give a more in-depth impression. The same goes with riding comfort but with the short tests over cemented roads, I can say that it’s on average.

The Toyota Raize has all the makings of a best-seller – good looks, great driving performance, competitive pricing, and of course, the Toyota badge that’s globally synonymous with reliability. In fact, I'm calling it as early as today – the Raize will definitely be one of TMP’s top three best-sellers in 2022. With a price tag that starts at P746,000 for the E MT and ceilings at P1,031,000 for the non-White Pearl Turbo variant, the Raize can eat away on sales figures of the country’s bestseller, the Toyota Vios. An inevitable happenstance, but we’re sure TMP’s hoping to sway new buyers into the Toyota brand rather than the Vios customers.

Related Article: Will the Raize be one of Toyota PH’s best-sellers? [Poll of the Week]

Sure, the Raize doesn’t stand out in all areas, particularly with the materials used in the cabin, but that doesn’t stop people from buying the Wigo, right? Now, imagine a Wigo that’s taller and more practical for Philippine roads for just a bit more money. That’s a tough recipe to beat.

ALTERNATIVE REVIEWS TO THE 2022 Toyota Raize