Since its introduction way back in 1995 and after five generations, the Honda CR-V still stands today as one of the most prolific compact crossovers ever made. And of course, people love it a lot as it’s based on the famous civic platform. This makes both the older and newer CR-V models nimble despite its large-ish size.

It’s also quite comfortable especially if used as a family daily driver within the city hence the name; “comfortable runabout vehicle.” And yes, the diesel-powered fifth-generation CR-V is also one of the reasons for its recent popularity with over 3,111 units sold by Honda Philippines back in 2018. 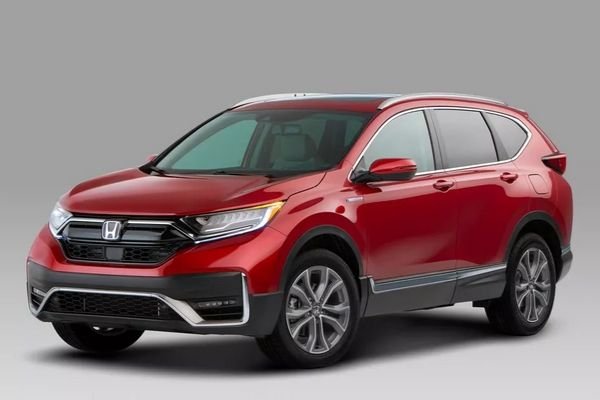 Now recently, the Americans have recently gotten a massive update for the 2020 model year of this brilliant compact crossover SUV. A lot of things have been updated and that, of course, is very crucial for the CR-V as it has a lot of competitors nowadays. A fresh face has meant life or the death in many models in the past.

So Philkotse.com will discuss all the facts that you, our reader, will want to know about the all-new American-spec Honda CR-V 2020.

For the new CR-V that was updated for the American release, it comes with several updates done to its appearance. Upfront, the grille is slightly different especially on the Hybrid version which has less chrome. Below that, the bumper is now much more aggressive. It also has this piece surrounding the row of LED fog lights which then runs across the width of the lower bumper. 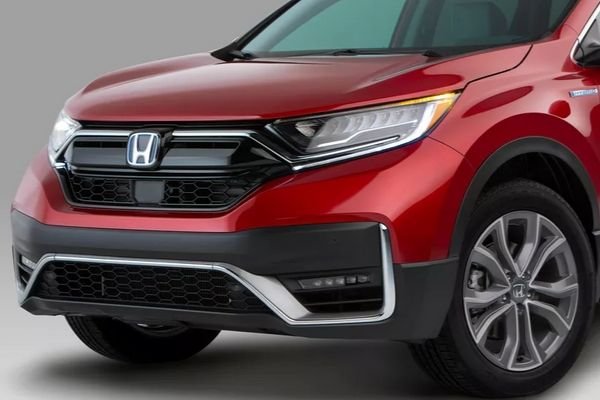 Here's a closer look. Note the pieces surrounding the strip of LED fog-lights.

With the hybrid version, you might also notice that the Honda logo is blue which of course makes it stand-out visually yet subtly from the other variants.

As for the rear of the 2020 Honda CR-V exterior, the tail-lights of the American-spec Honda CR-V are given a dark tint. As for the overall design and shape of the other portions of the rear, it remains largely the same save for the new chrome exhausts. As for the hybrid variant, the exhaust tip is hidden well below the rear bumper. 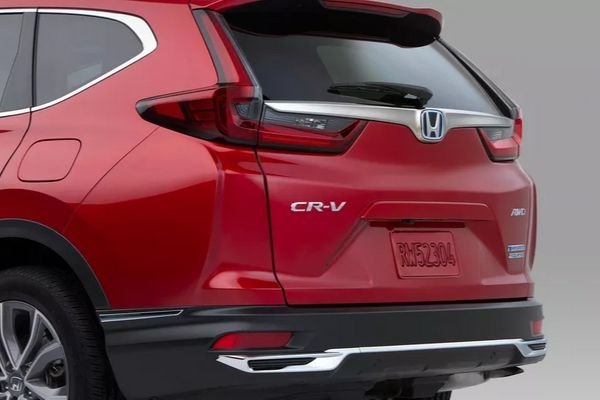 The new alloy wheels on the updated CR-V are also much elegant that the set we have on our currently available Honda CR-V models, which if we’re being frank, looks like fidget spinners. They can also come either as an 18 inch or 19-inch set.

The  2020 Honda CR-V interior has also been updated. The center console has been re-shaped with ease of use in mind while the CR-V Hybrid gets its own special interior trim. Also new aboard the touring variant is the Qi wireless device charging device and a colorful, digital gauge cluster as well as USB ports for the rear passengers.

The touchscreen though is still a seven-inch unit that comes with Android Auto and Apple CarPlay. Take note that Honda does have a larger, fancier 8-inch touchscreen but for some reason, they didn’t give that to the new Honda CR-V 2020. 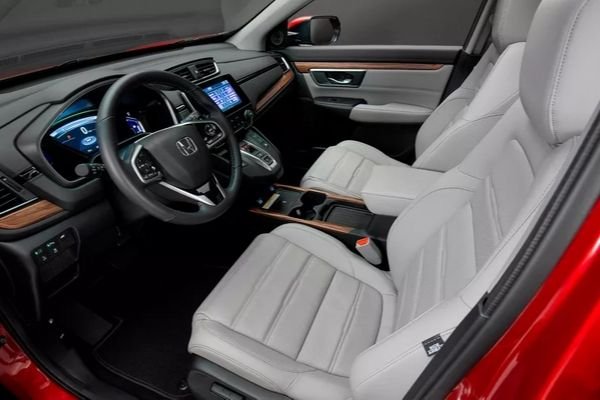 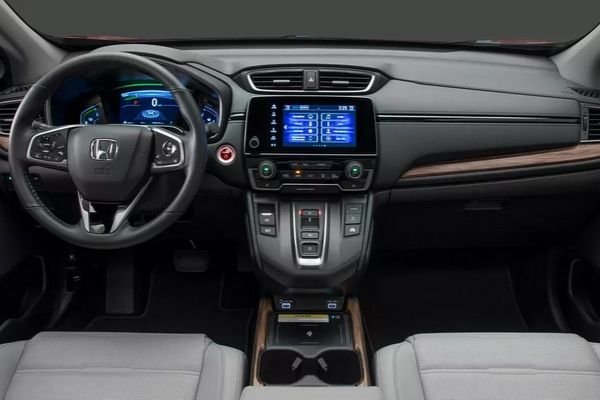 While features are abundant inside, the touchscreen is still 7 inches in size.

Other interior features also available in the American-spec 2020 CR-V are dual-zone climate control, heated seats that we doubt will be useful here in the Philippines, a navigation system, and the usual connectivity options we commonly see in modern cars like Bluetooth and AUX ports.

For the update, it seems that Honda of America wanted to streamline the engine options. They dropped the naturally aspirated 1.5 in favor of the turbocharged 1.5 inline-4 VTEC, making it standard across all non-hybrid variants. The said engine makes around 190 horsepower mated to a CVT. As of the new version, the CVT is the only transmission choice for the whole 2020 CR-V line-up. An all-wheel drive and a front-wheel-drive are available.

For the Hybrid which stands alone as it’s own variant, it comes standard with an all-wheel-drive. In terms of engines, the new 2020 CR-V shares exactly the same hybrid propulsion system with the Accord Hybrid. It uses two electric motors in conjunction with a very fuel-efficient 2.0-liter gasoline Atkinson-cycle inline-4. Combined, the CR-V hybrid can make up to 212 horsepower and 315 Nm of torque. The turbocharged 1.5 inline-4 VTEC under the hood of the CR-V

With this configuration, the CR-V hybrid, according to Honda themselves at least, has an estimated average fuel consumption of 42 miles per gallon when driven around in the city. That’s 17 kpl which is impressive for a vehicle of its size. Also, that certainly a better figure than the Toyota Rav4 Hybrid’s 41-mpg rating.

As of yet, there aren’t many details on how the hybrid behaves in real-world driving conditions. We can say however that it comes with several drive modes whose buttons are surrounding the new push-button gear selector. These modes are the Sport mode, the ECO mode, and the EV mode.

In talking about the EV mode, it does what exactly what it says; it shuts off the combustion engine leaving the two electronic motors to handle the vehicle’s propulsion. As of yet though, Honda has not yet shared more specific details on this particular mode like maximum range and speed.

We predict however that the Hybrid variant, with both of its engines activated and with the sport mode turned on, will make for a more fun driving experience. Even the 1.5-liter turbo on the non-hybrid American variants of the CR-V is much more powerful than the naturally aspirated 2.0-liter gasoline CRV available in the Philippines right now.

Lastly, the CR-V hybrid also has a pair of paddle shifters which are not paddled shifters at all. When you press the left “shifter,” the regenerative braking from two electric motors will be increased.

Aside from being given a very potent hybrid propulsion system, the safety features for the 2020 Honda CR-V released in the U.S. has also been given a very significant upgrade.

For one thing, the Honda Sensing suite is now standard on all models. That includes a collision mitigation braking system, a road departure mitigation system, adaptive cruise control, a traffic sign recognition system, and a lane-keeping assist system.

Aside from those, the American 2020 CR-V also comes standard with a full complement of airbags and in the recent American New Car Assessment Program, it scored five stars overall.

>>> Contact details of the nearest Honda dealerships to check out the latest promo and financing options.

Currently, the 2020 Honda CR-V including the hybrid variant is yet to be released around this Fall. That’s from mid-September to mid-December. As such, pricing details for the new CR-V are yet to be announced. If we have to guess with regards to a Philippine release, that might not be far off.

We just hope that at least in the near future, Honda Philippines will introduce the hybrid. If ever that happens, it would indeed be a very timely release considering that more and more hybridized models are announced for our country.

It may not have a hybrid and isn’t as powerful as the 2020 1.5 liter turbo CRV, but it more or less packs the same punch when it comes to space, comfort, and style.

There is still no official words regarding the price of the new Honda CR-V 2020 Philippines. For now, refer to our full price list for the current Honda CR-V. 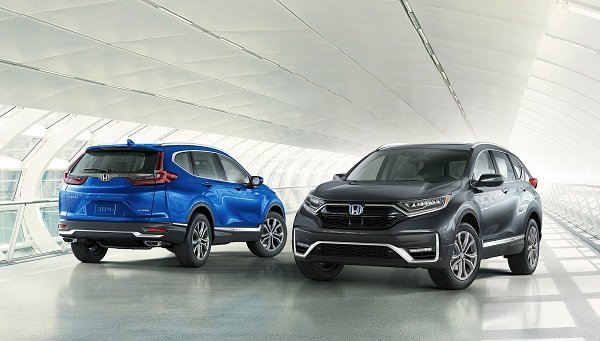 For more, up to date car reviews and previews on versions yet to be released here in the Philippines, please keep reading on Philkotse.com.