The Honda Civic is arguably one of the most popular vehicles in the Philippines. This compact sedan is among the sought-after cars during the 1990s due to its reliability, versatility, and distinctive styling. It can be a daily driver around the city as well as a modified track-ready car on the weekends.

Today, the popularity of the Honda Civic can be considered not as much compared to the 90s and early 2000s. One of the reasons for this is the emergence of crossovers and midsize SUVs in the market. However, despite the new trend in the automotive market, the Civic still has a loyal following here. To prove that point, the Civic is among the top-selling vehicles of Honda Cars Philippines Inc. (HCPI) last 2020. The Civic registered 1,188 units sold, making it HCPI’s fourth best-selling model. It sits behind the BR-V with 2,041 units sold, the City with 3,094, and the Brio with 3,260.

The front end of the Civic RS Turbo comes with sharp-looking LED headlights along with LED daytime running lights, and fog lamps. The vehicle is also fitted with a glossy black grille, which is exclusive to the RS Turbo variant. Of note, the lower-spec trim of the Civic comes with a chrome garnish on the grille. I prefer the glossy black design seen on the Civic RS Turbo because it looks more sinister and complements well with the car’s red exterior paint. The Civic RS Turbo also has an angular bumper that adds to the already sharp and sporty design of the front end.

In case you’re wondering, this Civic RS Turbo is the facelifted version of the 10th-generation model. The changes that Honda gave to the vehicle are subtle, and it can be seen on the car’s lower bumper that now comes with a continuous black garnish accent. The fastback roofline gives the Civic RS a coupe-like appeal

Turning at the side, you can instantly see the Civic RS Turbo’s crisp character lines. It also comes with power-folding side mirrors that are integrated with LED indicator lights. The door handles come in chrome, giving a bit of an accent to the car’s side profile while the blacked-out 18-inch alloy wheels add flair and style points to the vehicle. The thing I like most about the 10th-generation Civics is its fastback roofline, which gives the car a coupe-like appeal. Plus, it makes the vehicle look sportier. The rear, on the other hand, looks equally sporty as the front end. The most attention-seeking design detail of the Civic RS Turbo’s rear is the C-shaped LED taillights. The said taillights are one of the designs that would be easily remembered when you talk about the 10th-generation Civic in 10, 20 years’ time. Aside from the taillights, the car also gets an RS Turbo exclusive rear spoiler. In comparison, the lower-spec Civic trims such as the E and the S don’t come with a spoiler.

Overall, the exterior styling of the 2020 Honda Civic RS Turbo is a stand-out in its class. Among its segment rivals, this car separates itself from the pack due to its sporty, aggressive, and distinctive exterior design. 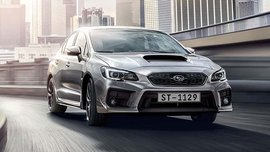 Red stitching is also integrated into the steering wheel

The leather steering wheel has a nice grip, which makes driving even more comfortable. However, I’m not much of a fan of the integrated audio and phone controls on the steering wheel due to the materials used that resemble cheap plastic. But, the digital instrument cluster makes up for it as it features a sporty and a Civic Type R inspired look. Moreover, it has paddle shifters in case you want to have a more spirited drive. The rear passenger area of the vehicle can accommodate up to three individuals. The leg- and head-room is generous especially when there are only two people seated at the back. The Civic RS Turbo doesn’t come with rear aircon vents. But that’s not a problem since the main aircon vents upfront can efficiently cool down the cabin. You can fit an assortment of items in the trunk

The 2020 Honda Civic RS Turbo doesn’t just look sporty as it is equipped with notable tech gizmos and safety features. Placed right at the center of the dashboard is a 7-inch infotainment touchscreen with Apple CarPlay and Android Auto. This feature allows you to mirror your phone’s operating system seamlessly to the infotainment touchscreen. With that, it allows you access to apps such as Waze and Spotify. To use Apple CarPlay or Android Auto, simply plug in your smartphone’s charging cable to the USB port found at the center console before you start your drive. The touchscreen also serves as a rear-camera display when you shift to reverse. A feature you’ll appreciate when parking in tight spaces

Aside from the infotainment system, the Civic RS Turbo has automatic dual-zone climate control. One of the things I like most about the interior of the vehicle is the use of tactile buttons for the audio and climate controls. This allows you to easily locate and access essential controls without taking your eyes off the road.

Of note, this vehicle comes with speed-sensing door locks, an electronic parking brake, and a push start button. It is also equipped with an ensemble of airbags (front, passenger, side, and side curtains) as well as Vehicle Stability Assist (VSA), Hill Start Assist (HSA), Anti-lock Braking System (ABS), Electronic Brake-force Distribution (EBD). And it has disc brakes on all four wheels.

aThe 2020 Honda Civic RS Turbo is powered by a 1.5-liter turbocharged gasoline engine that delivers 171 hp and 220 Nm of torque. The engine is mated to a continuously variable transmission (CVT). The Honda Civic RS Turbo is powered by a 1.5-liter turbocharged gasoline engine

The Civic RS Turbo comes with notable power delivery thanks to its 1.5-liter turbo gasoline engine. The turbo engine compensates for the shifting characteristics of the CVT, which gives you a driving experience that’s both smooth and sporty. The Civic RS Turbo accelerates quickly even on the Normal drive mode, giving you the ability to do swift overtaking. In case you’re wondering, the Civic RS Turbo comes with three driving modes: Eco, Normal, and Sport. During the duration of the test drive, I opted to use the Normal drive mode more often. The Civic RS Turbo coms with a sporty and striking look

When driving at highway speeds, the car is planted and stable, which gives you confidence and peace of mind. The Civic RS Turbo’s steering gets firm when you start to gain speed, which translates to better control of the vehicle. On the other hand, this sporty compact sedan also comes with a light steering feel that makes city driving more manageable. It is responsive even to minimal inputs, which I find useful when changing lanes along EDSA or when parking the vehicle.

In terms of ride comfort, the Civic RS Turbo has a tolerable body roll, and its suspension leans on the firm side. However, the overall ride comfort is not compromised despite having a relatively firm suspension. After all, this car is meant to give you a sporty driving feel.

Overall, the 2020 Honda Civic RS Turbo is never short of style points and could deliver notable driving performance. Aside from its ever-confident exterior design, the Civic RS Turbo also comes with a sporty interior theme that combines creature comforts such as tactile buttons, leather seats, Apple CarPlay and Android Auto, rear camera, 6 speaker system, among others. A stand out sedan

As such, the Civic RS Turbo is a vehicle that intends to offer the best of both worlds. It can be a daily city driver as well as a weekend road trip car that you enjoy on the open highway and winding roads. On the other hand, some might say that getting a sedan isn’t the most practical thing to do considering its price tag that’s Php 1,615,000 as of this writing. Well, that may be true. But, crossovers and midsize SUVs in the market can’t give the same driving pleasure that the Civic RS Turbo can give you. This car can also be considered as a status symbol that can turn heads when it’s out on the road. Moreover, this is your last chance to get a 10th generation Honda Civic since the all-new model will be coming out soon.

Q: How much is Honda Civic in the Philippines?

A: The Honda Civic is available in three variants in the Philippines with a starting price of Php 1,115,000 while the top-spec variant is priced at Php 1,615,000.

A: If you’re looking for a sporty sedan, you can consider getting the Honda Civic.