User's: 5.0/5
The 3rd generation of the Ford Everest gets an update so let's check out what's new! Your hint is in this Ford Everest 2020 review!

Recently, Ford Philippines has finally brought in the updated version of their ever-popular Everest SUV for the 2020 model year and it has a lot going for it. The 2020 Ford Everest for the Philippines now has an improved interior, added features for practicality and ease of use, and more importantly...heaps of power. But before we start talking about those, let us talk a little bit about the Everest’s history first.

For the better part of 15 years and throughout three generations, the Ford Everest has been competing with the Toyota Fortuner, the Mitsubishi Montero Sport, the Isuzu Mu-X, the Chevrolet Trailblazer and more recently the Nissan Terra in the very highly contested SUV market in the Philippines, Thailand, Australia, and many other countries. And during that time, it was proven that Filipinos had an appetite for American branded SUVs. Despite being popular, however, the Everest didn’t stand out that much.

With this current update, however, that has drastically changed...on the inside. Like its competitors, the Ford Everest is based on a pick-up truck, namely the Ford ranger and in lieu of the improvements and new variants for the Ranger most notably the Raptor, the Ford Everest 2020 has grown too as well.

So without further ado, let's read Ford Everest 2020 Philippines review provided by Philkotse.com which will highlight all the new features and specifications Ford has decided to pack inside the excellent SUV.

>>> Latest update: 2021 Ford Everest: Expectations and what we know so far

While there aren’t many things that have changed with the 2020 Ford Everest exterior, a keen eye might spot out new details. Take for example the LED daytime running lights which is now standard across all variants, the chrome on the side mirrors and on the door handles, as well as the slight re-design of the front bumper which now features a larger air-intake.

The fog light housing is now also seamlessly integrated into a single piece which we think is neater looking than the one on the previous model and apart from that, the grille is now slightly different. Towards the sides, the overall shape of the 2020 Ford Everest remains largely the same with its predecessor save for the wheels which now features a much more premium, modern spoked design.

And as for the rear, not that much has changed in terms of looks but there are some key differences about it which we’ll talk about later.

The Ford Everest 2020 gets two variants, the Titanium 4x2, and the Titanium 4x4 Bi-turbo. In terms of other key exterior features, the Bi-Turbo comes with auto high beam control while both variants have rain-sensing wipers. Up top, both variants also come with roof racks. Viewed from the rear, not much as changed aesthetically

>>> Widen your car search with our best cars for sale section.

While it’s still quite spacious as its predecessor, the Ford Everest 2020 interior has a lot of useful new features which vastly improves the model’s comfort levels.

Let’s start with the seating. For the front row, both seats are electronically adjustable through 8 different directions and the second row is now able to anchor two child seats. For the rear-most row, instead of pushing it down manually, the seats can now be folded with a push of a button.

With regards to space in the trunk, it’s more or less the same with the seats folded or otherwise. What’s really different however is the automatic rear door which will raise itself upon moving your foot below the rear bumper. In short, the hands-free liftgate is a signature from Ford cars among many other car brands. So, this particular feature is very useful especially if you’re carrying heavy stuff which requires two of your hands alone. And the last thing of note is that the more affordable 2.0 Titanium 4x2 does not have a sunroof.

Now here’s where things get a bit exciting. The 2020 Ford Everest currently has two engine options. Both are diesel and both have significantly pumped up the Ford SUVs as two of the most powerful SUVs you can buy in the Philippines today.

For the more affordable 4x2 variant, it gets a turbocharged 2.0 liter inline-4 that can make 180 horsepower and 420 nm of torque. A figure which already matches up the Titanium 4x2 variant with the likes of the Nissan Terra.

For the top of the line, 4x4 variant, however, it gets the same engine as the Ford Ranger Raptor; the twin-turbo, 2.0 liter, Inline-4 EcoBlue which was nicknamed the “Panther”. Within the Titanium 4x4 Bi-turbo, it makes a very hefty 210 horsepower and 500 Nm of torque. Impressive right? But what’s more impressive is the fact that the 2020 Everest Bi-Turbo’s peak torque can be reached at a mere 1,750 RPM which will definitely be useful once you decide to take the all-new Everest off-road. 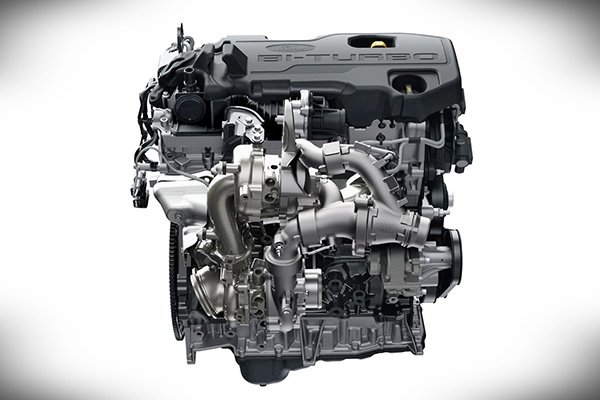 Ladies and gents, the Ford Everest's and the Raptor's 2.0 Bi-Turbo Inline-4

Apart from the new engine, the Ford Everest 2020 also gets a new 10-speed automatic which definitely suits the impressive power coming from the engines.

When it comes to off-roading and of course, you’ll be wanting the 4x4 Bi-turbo due to it's very easy to use Terrain Management System and its electronic locking rear differential. In comparison, the 4x2 only gets to send its power to the rear wheels with a standard, non-locking rear diff.

In terms of safety, the Ford Everest is no slouch. Coming standard on both versions are rear and front parking sensors, lane departure warning systems, blind-spot detection systems, stability control, an engine immobilizer with a security alarm, and of course; ABS with EBD. With regards to the passive safety stuff, both variants also come equipped with a lot of airbags namely a pair of airbags for the front, a side airbag, curtain airbags, and a knee airbag.

So yeah, the 2020 Ford Everest’s capacity for safety means that it has a great potential to function as a family car.

7. Ford Everest 2020 Price in the Philippines

>>> Check out more Ford Everest for sale at cheaper prices

With the all-new 2020 Ford Everest, it appears that Ford Philippines might have shaped up to compete better in the Philippine SUV market segment. Which is a great part has been shown in this Ford Everest review is that due to the new Everest’s great balance of being a high-performance, the car is a great potential for off-roading.

Meanwhile being a very safe, comfortable and very practical SUV, Ford Everest is perfect for hauling around your family in and out of the city on a regular basis. As such, the Ford Everest 2020 model is one of the best mid-size SUVs you can buy right now so if you’re interested, check out our Ford dealerships near you. ALTERNATIVE REVIEWS TO THE 2022 Ford Everest