Toyota Raize vs Toyota Rush: Why compare these two?

By now, most of you already know that Toyota Motor Philippines has a new subcompact crossover added to its model lineup. This is of course the Toyota Raize, a five-seater model made by Daihatsu.

Some people however, can’t help but compare it against other existing Toyota models. So how does the Toyota Raize weigh up against the Toyota Rush in terms of specs? When it comes to exterior equipment, both the top-spec Toyota Raize and the mid-spec Toyota Rush come standard with LED headlamps, LED taillights, and front fog lamps. The Raize 1.0 Turbo however, does have power-folding mirrors, which the Rush E variant lacks. Inside, the Toyota Raize can seat five, whereas the Toyota Rush can seat up to seven. Both do come standard with manually adjustable front seats. The ones on the Raize though, are clad in a combination of synthetic leather and fabric, while the Rush’s seats are fabric only. Inside the top-spec Toyota Raize

The Rush does come with a tilt and telescopic steering column while the Raize a tilt-only steering column. The larger vehicle also comes with rear AC vents which are not present on the Raize.

In comparison, the Rush E gets a smaller seven-inch headunit that instead uses a proprietary smartphone mirroring software. Like the one on the Raize though, it still has Bluetooth and USB connectivity. Of note, both headunits are then linked to a six-piece speaker system.

Under the hood, the top-spec Raize uses a 1.0-liter inline-3 turbocharged gasoline engine. This engine can then produce up to 97 horsepower and 140 Nm. It is paired with a continuously variable transmission (CVT) with paddle shifters for its manual model. Power is then sent to its front wheels. In turn, the Toyota Rush E uses a naturally-aspirated 1.5-liter inline-4 capable of making 102 horsepower and 134 Nm of torque. Instead of a CVT, it uses a four-speed automatic gearbox, which sends power to its rear wheels.

So while smaller, the Raize’s three-banger actually makes more torque compared to the Rush’s 1.5-liter inline-4. That said, the Rush can still make a bit more horsepower, though the difference of five horsepower is marginal at best.

The Raize is built on a fully monocoque chassis. The Rush meanwhile uses a unique chassis which is a combination of a unibody frame and a body-on-frame chassis. To this end, the Rush is more of an SUV compared to the Raize crossover. And while both use a MacPherson strut front suspension, the Raize uses a rear torsion beam while the Rush uses a 5-link axle type rear suspension.

For braking, the Raize gets a front disc brake and a rear drum brake. In turn, the Rush comes with disc brakes all around.

The Raize does have blind-spot detection and rear-cross traffic alert, both of which are unavailable on the Toyota Rush.

On the flipside, the Rush gets more airbags numbering at seven, while the Raize only gets six.

Comparing the Toyota Raize vs the Toyota Rush is like comparing apples and oranges. That’s because they serve vastly different purposes in the context of the Philippine automotive market. The Toyota Raize 1.0 Turbo from the rear

Then again, some buyers might want to go for the Rush E instead of the Raize 1.0 Turbo to “get their money’s worth.” Because you know, it can seat more. Some with kids might also turn to the Rush because it might be “a car they can grow into”. The Toyota Rush from the rear

Do note though that the top-spec Raize does offer more tech compared to the older Rush. It is also more compact and easier to maneuver around tight urban streets. 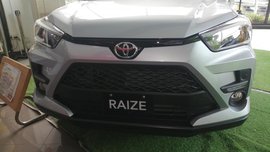