This Toyota Innova Touring Sport 2018 Philippines review will give you direct insight into this special Innova in terms of price, specs and more.

You’re a first time driver and are wondering which car to buy? We see that opting for lower-end offerings might be an economical solution but these models usually lack certain amenities. On the other hand, top-of-the-line variants are always the best yet they’re obviously not budget-friendly.

So what should you choose? Today, we at Philkotse.com highly recommend the Innova Touring Sport 2018 to you - Pinoy drivers who’re yearning for a special edition model which combines the best of both. Well, this unique Innova features the familiar trimmings of a mid-spec variant but still owns some extras which help enhance the value proposition.

Now, let’s find out what the Toyota Innova Touring Sport 2018 Philippines has to offer to sway Filipino from buying standard version.

Exterior is the most obvious change on the special Touring Sport. The Japanese automaker has decided to spice things up for its new Innova with the addition of a body kit and several tweaks. The MPV now looks sportier with a blacked-out front grille bordered by smoked headlamps. Nearby, a new front chin spoiler is not bad together with L-shaped trim accents which complete a more aggressive façade. Exterior is the most obvious change on the special Touring Sport

The side profile comes outstandingly with a set of 16-inch alloys finished in matte black with the vehicle’s sportier vibe. In the meantime, black wheel lip moldings give a strong-featured contrast against the gleaming additions on the limited model. Moving backwards, you will be dazzled by chrome trim on the rear reflectors and the blacked-out middle portion of the tailgate which is a divergence from the bodywork. Moving backwards, you will be dazzled by chrome trim on the rear reflectors and the blacked-out middle portion of the tailgate

For the most part, the Innova Touring Sport 2018 exterior is much more cunning than any MPVs or people carriers we’ve ever seen. Specially, the Red Mica Metallic hue seems to be a perfect foil for scores of black and chrome finish on the outside.

>>> Read also:  Toyota Innova & Mitsubishi Montero Sport: Which one do you prefer?

Getting inside, you will be greeted by an ergonomic and stylish dashboard. It is believed that most of you are still impressed by the way Toyota has created such a gorgeous cabin that instinctively belongs to a people carrier. Given the inside of the Touring Sport is not as glossy as that of the top-end models, its new design has gone far beyond the first-gen Innova’s. Getting inside, you will be greeted by an ergonomic and stylish dashboard

Not resembling the standard brown fabric on the higher-end G and V variants, the new Touring Sport comes adorned with new black fabric on the seats and door handle trim. In spite of not being as upmarket as the brown upholstery, the new color trim perfectly matches with its snazzy look.

The said car is not equipped with automatic climate control yet manual A/C is not too bad since both systems are good at delivering cool air throughout the cabin. Gone are the Optitron gauges, LED ambient lighting and the TFT multi-information display. It appears that the car manufacturer has removed several nicer bits from the range-topping models though, the sporty MPV receive a noticeable update – a touchscreen system. 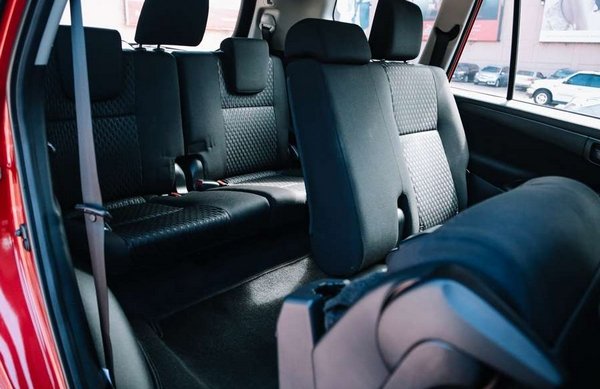 With reference to cabin space, head-, leg- as well as elbow room is abundant for the second-row seats

Distinct from the E and J grades that simply feature a conventional 2-DIN sound system, the 2018 Touring Sport is pampered with a touchscreen infotainment system seen in higher-end Innovas. It fully supports CD playback, AM/FM radio, Bluetooth hands-free telephony, as well as USB and Aux connectivity. Better still, navigation can also be set up as a dealer option. This may be a simple modification yet to our eyes, it is a nice touch granted that the original model that the Touring Sport is based on does not have such feature. What’s more, our MPV is likewise given parking sensors.

Parking yourself in the comfortable driver’s seat is currently much easier owing to 3-way adjustable seat and a telescopic steering rack. Even though adjustable lumbar support is not available, the driver still feel relaxed when driving the Touring Sport even at higher speeds. Nonetheless, if only the company offered a firmer seat cushion, everything would be far better. With reference to cabin space, head-, leg- as well as elbow room is abundant for the second-row seats. Accessing the third row is also no trouble since seats in the middle row are currently spring-loaded for easier ingress and egress. Plus, you can spot a middle headrest on the third-row, meaning the Innova is now not only a good 7-seater for Filipino families, it’s an 8-seat MPV to be exact. As for average-sized people, getting to the back is a bed of roses but if you’re a bit taller, it is necessary to slide the second-row seats forward for more space. 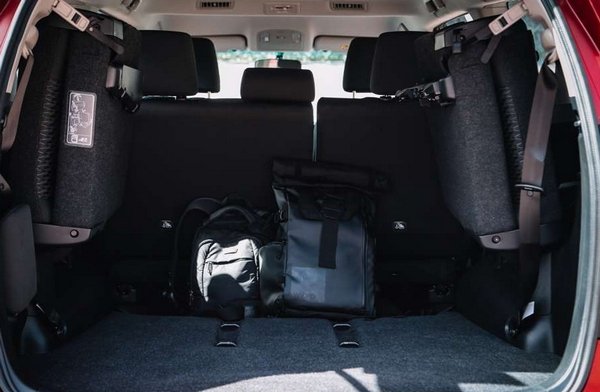 While both in and outside are carried over by subtle changes, under the sheet metal of the 2.8 AT Touring Sport retains the familiar 2.8L 4-cylinder 1GD-FTV turbo diesel engine which generates 171 PS at 3,400 rpm and 360 Nm of torque between 1,200 and 3,400 rpm. It works in tandem with a 6-speed automatic gearbox with manual select. When compared to the old 2.5L 2KD-FTV power plant with 101 PS and 260 Nm, this new 2.8L unit is exactly a significant update when it comes to pulling power. Under the sheet metal of the 2.8 AT Touring Sport retains the familiar 2.8L 4-cylinder 1GD-FTV turbo diesel engine

Just by a twist of the key, the new turbo diesel mill can rumble into life. Initially, the 4-cylinder feels and sounds a little rough, particularly on a cold start. However, once it is warmed up, the engine becomes a little more refined. Beyond that, thanks to a large amount of torque at low revs, the Touring Sport is nicely pulled along with ease. To keep it moving, only a light prod of throttle is enough no matter where you’re moving through, along city roads or around town.

Put your foot to the floor and the Touring Sport hastens to feed all available power to the wheels. Even, you can effortlessly light the rear tires up in case you are not careful. The engine’s eagerness to rev is also worth noting. Mated to a quick-shifting automatic transmission, the new Innova is capable of hitting highway speeds quite swiftly, so remember to check the odometer every time.

Additionally, you would be pleased to know that Toyota is likely to have found a way around the gearbox’s tendency to hunt for gears when hauling a full load. Although manually shifting through the gears still feels some delay, the transmission operates smoothly and always knows what gear to shift. Just by a twist of the key, the new turbo diesel mill can rumble into life

Speaking of fuel consumption, the Toyota Innova 2018 is a fairly fuel-efficient. In city driving, it does average 9.0 – 10.0 km/L of fuel while on the highways, the MPV rates 15.0 km/L. When you are stuck in heavy traffic, expect an average consumption of 7.0 – 7.5 km/L. In fact, these figures can definitely be improved by an “Eco” mode that comes as standard in this special version. Also on tap is a “Power” mode which is basically in charge of sharpening acceleration and picking up the revs quicker.

The Innova Touring Sport, in true Innova fashion, provides a lofty ride. Due to a fine suspension system, traversing road bumps, rutted streets and uneven terrain is easy-peasy. As a matter of fact, the machine rides softer than its predecessor. While the softer suspension is regarded as a praiseworthy enhancement, it also means passengers who get car-sick easily might not like a floaty ride. Concerning handling, there is nothing to complaint about the Innova Touring Sport. With an emphasis on bringing driver and occupants a comfortable ride, body roll is also brilliant. That said, you should be cautious when confronting twisty roads because the car wallows around corners. Yet, the MPV is well capable of keeping its tires implanted to the pavement and can offer lots of road feel because of the finely-weighted hydraulic power steering. If you’re also into other Toyota models, click here to see the most updated listings of Toyota cars in the Philippines. This is truly a great 8-seater which is good-looking, relatively comfy and spacious, easy to handle and notably, very affordable

In general, Toyota has created a one-off offering which sits between average and over the top. This is truly a great 8-seater which is good-looking, relatively comfy and spacious, easy to handle and notably, is reasonably priced. With these in mind, it can say with certainty that the Toyota Innova Touring Sport 2018 Review is a fair compromise for Pinoys who’re fascinated by a stylish, high-tech and versatile MPV.