A Japanese and a French crossover come face-to-face

As years go on, automotive brands have made sure to elevate their crossover offering to meet the changing demands of customers.

For instance, Honda has already brought in the all-new HR-V. It offers a peppy engine, a comfortable interior space, as well as a plethora of high-tech safety technologies.

On the other side of the coin, Peugeot has recently introduced the 2008, and like the HR-V, it too belongs to the subcompact crossover segment. It also promises a feature-rich interior and plenty of safety technologies as well. To sum it up, the Honda HR-V is significantly larger overall compared to the Peugeot. It also has more in the way of wheelbase length, curb weight, and ground clearance.

Moving on to exterior equipment, both the Honda HR-V V and the Peugeot 2008 come standard with LED headlamps, LED taillights, front fog lamps, LED daytime running lamps, and roof-mounted spoilers. The Peugeot does come with a pair of roof rails, which are absent on the HR-V. For wheels, both models ride on a set of 17-inch alloy wheels. Both also have power-folding side mirrors. Both also have twin exhaust tips, but the Peugeot gets actual rear fog lamps, whereas the HR-V gets reflectors.

Inside, both the HR-V and the 2008 can seat up to five occupants. Both also offer leather seating, a leather-wrapped steering wheel, a manually-adjustable driver’s seat, a tilt-and-telescopic steering wheel, and automatic air-conditioning. A peek inside the HR-V V's interior

Both also provide their drivers with a push-to-start button, as well as a digital gauge cluster. The 2008, though, does come with a heads-up-display, which is absent on the HR-V V.

The HR-V does come with a center arm-rest for the rear which is not present on the 2008. Both do have ample amounts of cubby holes and cup holders.

For entertainment, the HR-V V gets an eight-inch headunit that’s linked to a six-piece speaker system. This infotainment also comes with Apple CarPlay, Android Auto, Bluetooth, and USB connectivity. In turn, the Peugeot 2008 gets a slightly smaller seven-inch touchscreen. It gets the same number of speakers as the Honda, and it also has an identical set of connectivity options.

When engines are concerned, the HR-V V gets a 1.5-liter inline-4 turbocharged gasoline engine that’s good for 174 horsepower and 240 Nm of torque. Power is then sent to its front wheels via a continuously variable transmission (CVT) with paddle shifters. Meanwhile, the Peugeot 2008 uses a 1.2-liter turbocharged inline-3 gasoline engine capable of making up to 130 horsepower and 230 Nm of torque. It is also a front-wheel-drive model, but it uses a six-speed automatic transmission instead.

When power is concerned, the Honda is considerably more powerful than the Peugeot. This of course is expected since the HR-V V’s engine has one more cylinder and has a larger displacement than the Peugeot. Suspension-wise, both use a MacPherson strut for the front, and a torsion-beam type suspension for the rear. Both also use disc brakes for all four wheels, and both come with electronic parking brakes with an auto-brake hold function.

For safety, both the Honda HR-V V and the Peugeot 2008 come standard with anti-lock braking, stability control, hill-start assist, ISOFIX child seat anchors, etc. The Honda model does come with hill-descent control, which isn’t available on the Peugeot. Both also come with their own advanced driver assistance systems (ADAS). In the case of the HR-V, it’s the latest version of the Honda Sensing safety suite.

To this end, both come with emergency braking, lane keep assist, as well as high-beam assist. The HR-V however, does have adaptive cruise control, while the 2008 has standard cruise control. The 2008 does come with blind-spot monitoring and driver attention warning which aren’t present on the Honda HR-V V. In turn, the HR-V V gets a road departure notification system, a low-speed follow function, and road departure mitigation.

As one can see above, both the Honda HR-V V and the Peugeot 2008 1.2 AT both offer plenty of safety features, which make them great family cars. Then again, the HR-V does provide more convenience for its driver via its adaptive cruise control and low-speed follow function. Both are also comfortable when their interiors are concerned. When it comes to power though, the HR-V V clearly makes a whole lot more than the 2008. It even has paddle shifters, which the French-branded vehicle lacks. So if this is a concern for you as a buyer, you might want to lean more towards the Honda. The Peugeot 2008 from the rear

Like most of our comparisons, do take both of these models for a good ol’ test drive before settling on a final choice. Comparing specs is one thing, but actually driving them will help you make a more informed decision. 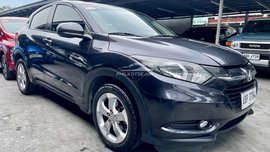 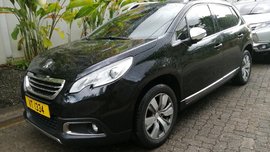