Safety is paramount when it comes to this crossover. Honda Cars Philippines Inc. (HCPI) invited Philkotse.com for the 2022 HR-V media drive. Through this, we had the opportunity to test out the all-new Honda HR-V by putting it through its paces from Bonifacio Global City to Anilao, Batangas along with a slight detour to Tagaytay Highlands.

How did the all-new HR-V perform? Find out in this 2022 Honda HR-V quick drive review.

When I first saw both the HR-V S and HR-V V Turbo, they were parked on the Serendra Mall driveway. And as with anyone seeing a new car for the first time, what I noticed was its overall shape.

It can be described as similar to many modern crossovers of its size, and if you squint hard enough, it might even look like the Mazda CX-5. And that’s not a bad thing mind you.

The all-new HR-V, though, bore an even more minimalistic design than the latter. It mirrors the 2022 Honda Civic, in that it virtually had no drastic slopes and sharp edges on its body. I think this gives this new crossover a mature look, which I rather like.

Then again, the front end does have some character lines on the lower bumper, and the top-spec HR-V V Turbo in particular gets a splash of flashiness via its mesh-type grille. The S trim in turn gets a bar-type grille. But still, the lower bumper on the V Turbo also tickles my fancy as it adds depth and presence to the vehicle. The HR-V S from the rear

Also eye-catching is the new HR-V's LED headlamp cluster where the turn signal lamps and daytime running lamps are also integrated. These provide a lot of convenience when driving through tunnels, though unfortunately we didn’t get to test them at night. The headlamps themselves do look sharp though.

Towards the sides, the new HR-V gets a set of 17-inch alloy wheels. It bears a quiet, understated design and complements the overall look of the new HR-V. Note that both the HR-V V Turbo and HR-V S have a width of 1,790mm, a height of 1,590mm, and a wheelbase length of 2,610mm. The V variant though, is slightly longer at 4,385mm, while the S variant is 4,330mm in length. Compared to the old HR-V, the new HR-V is longer by 91mm. That’s because the old second-generation model is only 4,294mm long. The old HR-V is also 18mm narrower than the new one with a width of 2,476mm. Then again, the old model is a bit taller and they also share the same wheelbase length.

The added length and width of course have an effect on the new HR-V’s interior space, which we’ll discuss later. In general, we can surely say that this new model has all grown up. Lastly, the rear end of the HR-V, as we’ve said above, follows through with the minimalist theme. Most of it is smooth, but again, the LED taillights provide distinctive appeal. I also can’t help but appreciate the LED strip spanning the width of the crossover. It adds more style, and it makes the HR-V more visible to other motorists as well.

In addition, the rear of the HR-V V Turbo looks more symmetrical, as it comes with a dual exhaust setup. This also provides a hint as to what this variant can do in terms of performance. More on that later. A closer look at the HR-V V Turbo's LED taillights

So what do I find lacking with the HR-V's design? Well not that much. I am of the opinion though that it would have added practicality if Honda gave it a pair of roof rails.

Just like the exterior, the interior of the 2022 Honda HR-V follows a minimalist theme. The air-conditioning vents are seamlessly integrated into the horizontally oriented dashboard, and the flashy bits are limited to metallic trim pieces on the doors, on the center control, and surrounding the side-most AC vents as well.

The controls for most of the HR-V's features were also easy to find as they were logically arranged. Moreover, I really appreciate the fact that the air-conditioning controls were physical knobs. On both the HR-V S and HR-V V Turbo, I found the front seats to be relatively comfortable and easily adjustable. For your reference, I am 5’11’’ and very wide at the shoulders and gut. Despite that, I found no points of rubbing whilst I sat on the front passenger seat and driver's seat.

The rear seats were also surprisingly generous when it came to legroom. And get this, I could even sit cross-legged even when a person was sitting in front of me.

Headroom, at least for the HR-V S though, was a bit of an issue. That’s because when I leaned backward, the top of my noggin managed to hit the sloping, rear-most portion of the HR-V's ceiling. That’s alright for short trips, but that could get annoying for long road trips. So if you’re a taller dude or gal, the front seat might be more to your liking. And yes, there's also some piano black plastic on the door-mounted controls

Curiously enough, I didn’t find this issue in the HR-V V Turbo. I am not sure as to why this is the case, but maybe the seats are softer and so I sunk down into them deeper. Also, the top-spec V also had more soft-touch surfaces and less plasticky bits as it should be since it is the top-spec variant in the Philippine market.

Honda also used some bits of piano black plastic around the shifter. This sounds cliché, but personally, I didn’t find this part agreeable as it will require constant wiping to keep clean.

I also found the trunk of the HR-V to be generous. Of note, there were three of us assigned in each vehicle, and all of us had a day bag or two each. All of them fit, with some room to spare for other stuff like some pasalubongs.

Moving on to on-board tech, I can say that the 2022 HR-V in general received a good amount of it as both trims come standard with the Honda Sensing safety suite.

This includes adaptive cruise control with a low-speed follow function, which we got to test out multiple times during the media drive on both variants. 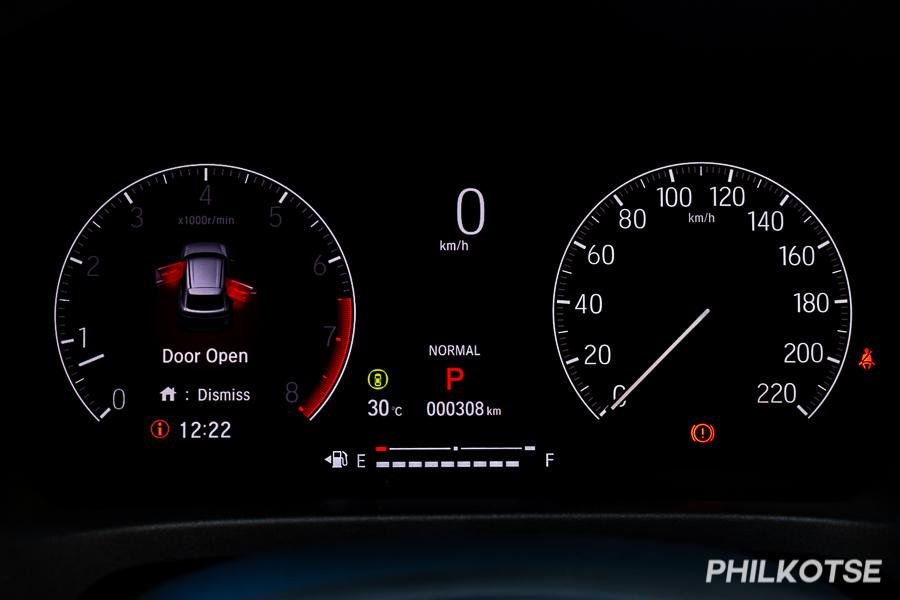 It worked well in keeping a safe distance from the car in front of us at around 80 to 90 km/h at the Cavite Expressway (CALAX). The lane keep assist and road departure mitigation system was also quick to react when we deliberately, but slowly drifted out from the center of the lane.

At Tagaytay, we put the HR-V's low-speed follow function to the test by activating the adaptive cruise control at a cruising speed of just 30 km/h. It was quick to detect the presence of the other HR-V that we were following and was able to adjust our own speed accordingly all the way down to around 10 km/h.

Besides the HR-V's safety kit, the digital displays on both HR-V trims were also user-friendly. Then again, the digital gauge cluster on the HR-V V Turbo is larger at 7-inches, while the one on the HR-V S is only a smaller 4.2-inch display. Regardless, both operated in the same manner as far as displaying the Honda Sensing component’s varied statuses is concerned. A closer look at its touchscreen. The sound system sounds good too.

The 8-inch touchscreen headunits on both variants were also easy to use and quite legible, and the six-piece speaker sets also on both variants sounded great. The one gripe I have on these though is that their volume controls were of the push-button variety instead of an arguably more intuitive knob control.

Before sharing what we think of how the HR-V drives, be aware that the HR-V S uses a naturally-aspirated 1.5-liter inline-4 gasoline engine capable of producing up to 119 horsepower and 145 Nm of torque.

In turn, the HR-V V Turbo uses a 1.5-liter turbocharged inline-4 that’s good for 174 horsepower and 240 Nm of torque. Both trims use a continuously variable transmission (CVT) with paddle shifters, and both are front-wheel-drive. With all that said, the HR-V V Turbo, which we were following and didn’t get to drive on the first day, left the HR-V S that we were driving in the dust, be it on the highway, and when ascending from Tagaytay Highlands.

The non-turbo engine on the S trim is a bit daunted on the said climb and the engine noises it made reverberated inside the vehicle. Then again, one fellow occupant commented that at least it sounded good, so there’s that.

On the second day though, we drove the V Turbo variant going back to Bonifacio Global City. The difference is night and day, which is already expected. It isn’t an outright sports car mind you, but its engine didn’t struggle as much, and overtaking and climbing hills was effortless. It was even, I daresay, fun to drive.

Road noise too was somewhat lesser felt on the higher-spec trim. Maybe that’s just me, or maybe that can be attributed to the different amount of sound deadening material between the two. Both though, do use the same Goodyear Assurance tires. Both trims come with hill-descent control and electronic parking brake, but only the V gets a drive mode toggle

eyond their respective power outputs, the HR-V in general was pretty stable. We hardly felt any body roll on some of the twisty roads we tackled, and the steering actually provided a bit of feedback.

We will further add to the 2022 Honda HR-V’s driving impressions once we have done testing the said vehicle at a longer period of time. Expect to see the fuel efficiency rating of the all-new HR-V once we publish the full review.

We can see what Honda Cars Philippines is gunning for with the all-new HR-V. It is aimed to provide a sensible and practical choice for potential crossover buyers whilst keeping the company’s global goal of reducing road vehicle accidents. And trust us in saying that with the HR-V's active safety kit, they’re getting there. It feels mature and grown-up, but the latest HR-V does offer an enjoyable drive overall

If you ask me though, the Honda HR-V, especially the V variant, can still give some folks a taste of a focused, practical, but fun-to-drive vehicle. Even as a top-spec trim, the V doesn’t bombard you with too many knick-knacks unlike what other compact and subcompact crossovers in the local market are becoming. And as we’ve said above, the Honda Sensing is not a mere gimmick, far from it actually.

ALTERNATIVE REVIEWS TO THE 2022 Honda HR-V