Do you know what are shiftlocks, shark fins, bumper lugs and what are their functions?

ShiftLocks, shark fins, bumper lugs, air conditioner hub on the dashboard, rear door latches, and rear trunk openers are six less known features in the car. This article from Philkotse.com will deepen your understanding about these less popular yet useful features. Let's check it out!

With automatic transmission, when the car engine is off, driver is not able to switch from P level to N, R or D. The question is how to bring the car to safety area if it stops unexpectedly in the middle of the way. Automakers have designed a small button that allows drivers to switch level within gearbox without starting the engine.

Called "Shiftlock", this button is usually "hidden" under a plastic cover around the gearbox or above the steering wheel. Therefore, the driver only need to remove the plastic cover, press the lower small pin and switch the gearbox. Then, get some assistance to bring the car to a safer place.

Called "Shiftlock", this button is usually "hidden" under a plastic cover around the gearbox or above the steering wheel

In older cars, you can easily see an antenna on the bonnet edge with SUVs and the trunk edge with sedans. The antenna is designed to receive radio waves. As for some more advanced models, it can automatically change its position when you turn on/off the radio mode.

However, today's cars have modern designs, which makes this antenna more aesthetically pleasant. Therefore, car manufacturers have integrated the antenna wire and the wave receiving set to the "shark fin" placed on the vehicle roof. This design is neat as well as sporty for the car. The antenna is designed to receive radio waves

Many people who have no experience in using cars are still wondering about the function of these “objects” in the front/back bumpers. In fact, they have several functions depending on their size, shape as well as installation location. If the car has two lids under the headlight, it is for automatic lights cleaner, which usually appears on the luxury cars.

In the front/rear bumper if you see one latch installed only on one side, that will be designed for installing the cable hook to pull the vehicle if it’s in trouble. If there are small finger dots around the rear or front bumper (in some vehicles), they are the distance sensors. These sensors will emit a warning sound if the driver is encountering obstacles. 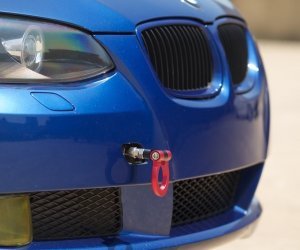 If the car has two lids under the headlight, it is for automatic lights cleaner, which usually appears on the luxury cars

4. Fixed air-conditioners installed on the dashboard

One of the six less well-known features in cars is the fixed air-conditioners on the tabloid. The function of those is to blow cool air straight to the A pillar on the car or to push the heat to the windshield and glass windows to assist the driver’s observing ability through the side mirrors easily. This function is more effective when moving in foggy areas or in rain.

However, with cars that have been used for a long time, the inside of the car window is loose, causing the cool air to leak out, leading to the reverse effect which is creating fog on the windscreen. The advice of car care and maintenance experts is to check and take care of this unit carefully to ensure visibility in all weather conditions. In fact, there are cases when people in the rear seats suddenly open the back door, causing accidents for the around vehicles which are moving next to the car. As a result, car manufacturers often equip a safety lock on the inside edge of the door, which is used to lock the rear doors to ensure safe entry/exit. This is also called a children's lock with the same designed purpose- avoid traffic accidents since kids may open the door suddenly. In unexpected cases such as children playing around and getting locked in the rear trunk or when the car sunk into a lake in an accident, the rear door opening mechanism from inside may help rescue yourself and occupants in the car.

In the United States, for a long time, the law has mandated that cars must be equipped with a tailgate lock to increase escape chances for occupants in the car. Different manufacturers may carry out different designs. However, normally, that would be a piece of luminescent plastic which is connected to the cable and when you jerk, the trunk will automatically open.