BMW X3 2018 debuts in the Philippines

Initially revealed in mid-2017 but it was not until now that the third-gen BMW X3 2018 made its local debut. In the Philippines, the new X3 is available in two trims: the M Sport and xLine, both of them pack the familiar 2.0L TwinPower turbo diesel mill. In the Philippines, the new X3 is available in two trims: the M Sport and xLine

Beginning with the exterior design, the refreshed X3 comes with an evolutionary redesign with a bigger kidney grille, new headlights and LED fog lamps placing flush by the corner air intakes. Besides, the bonnet now receives more character lines to complement the more aggressive façade as well as boosting a more muscular look. 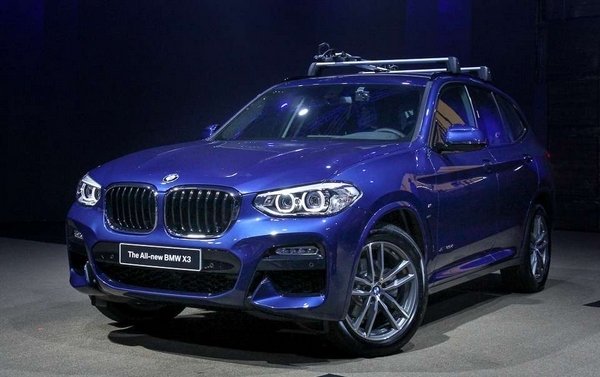 The refreshed X3 comes with an evolutionary redesign

When it comes to the side, despite the similar character lines as the previous X3, there is more emphasis on the lines, resulting in a wider-looking stance. In the meantime, window line is tweaked towards the rear fender for a glossier appearance. The rear facet is currently done up by BMW’s iconic L-shaped taillights and a couple of twin exhaust pipes. Internally, a floating infotainment screen is located in the center stack. The dashboard, meanwhile, has more rounded corners with another BMW trademark but still remains the driver-oriented layout. Leather is dominant in the cockpit alongside power seats with memory functions. Also worth mentioning here is the iDrive infotainment system that uses the company’s up-to-the-minute software. One more thing to keep in mind is that the M Sport and xLine are fitted with different interior trimmings to separate themselves from each other. Internally, a floating infotainment screen is located in the center stack

As noted earlier, the Philippine-spec BMW X3 2018 is motivated by a 2.0L turbo diesel engine capable of mustering 190 PS and 400 Nm of torque. Power is transferred to the four wheels via the brand’s xDrive system and an 8-speed automatic gearbox coming courtesy of the powerful ZF.

Now, look at the table below for most updated pricing for the  BMW X3 2018.