The Kia Soluto, otherwise known as the Kia Pegas in China, is a subcompact, B-segment sedan made in China by the Dongfeng Yueda Kia. Launched back in 2017 at the Auto Shanghai, the subcompact car is based on the PB platform which is notably used with the Kia Soul, Hyundai Veloster, Hyundai Reina, Hyundai Accent and Kia Rio.

As for the Philippine version, the Kia Soluto 2019 debuted just a few months ago on January 30, 2019, in conjunction with Kia Motors Philippines’ relaunch under the Ayala Corporation. Since then, the Kia Soluto has helped in increasing Kia Philippine’s market share because of its very competitive price and practical features. Now, let's have a closer look at this new product with Kia Soluto 2019 Philippines Review on Philkotse.com

Like we’ve mentioned before, the Kia Soluto 2019 uses the same platform as several other Kia and Toyota cars. As such there may be similarities especially with regards to the stance of the vehicle. Otherwise, the Soluto looks quite tame and indeed feels as if it was aimed to provide practicality rather than style.

On the front end of the Soluto is the immediately recognizable grille as other Kia vehicles. Surrounding that and other parts such as the fog lights are chrome trims which are not gaudy at all and instead tend to help add to the Soluto’s looks. There are faux air vents that might be contentious, depending on your taste.

At the rear, the 2019 Kia Soluto exterior is more sedate and could actually use more character lines. The existing rear lights and the trunk are functional and are simple in their design. Some might like that simplicity in a vehicle but seeing that the Kia Soluto is positioned for the younger automotive consumer, Kia might want to add a little more flair especially on the rear end. Viewed from the side, one can definitely appreciate the smooth, sedan shape of the car. With a little improvement on wheel size, the Kia Soluto can have considerably more presence. One can make out hints of a very tight looking, even sporty vehicle, but it just needs a little help to stand out. Maybe aftermarket mods can help with the appearance. Maybe aftermarket mods can bring out the sporty side of the Soluto, which is almost begging to get out

Overall, the Kia Soluto exterior seems to be about function over form and despite having a conservative, sedate look, it still boasts high quality.

Kia Soluto 2019 sellers in the Philippines

Despite having a muted exterior styling, Kia Soluto 2019 interior succeeded in making its cabin look a bit more upmarket. For one thing, the three-spoke steering wheel looks nice with its silver and black accents and the seats are comfortable and spacious overall. No complaints there.

When it comes to the instrument panel however, the Kia Soluto looks somewhat too spartan for some people out there but otherwise, everything is ergonomically situated. The dash is made out of a plastic material which if you knock on has a familiar hard plastic “thunk.”

Otherwise, though, the build quality is tight, and there are no visible gaps on both the dash and inner door panels. Other features you get with the Soluto are tilt-adjustable steering and adjustable seats which are useful for our friends with a smaller stature. The side mirrors can be adjusted electronically, too. 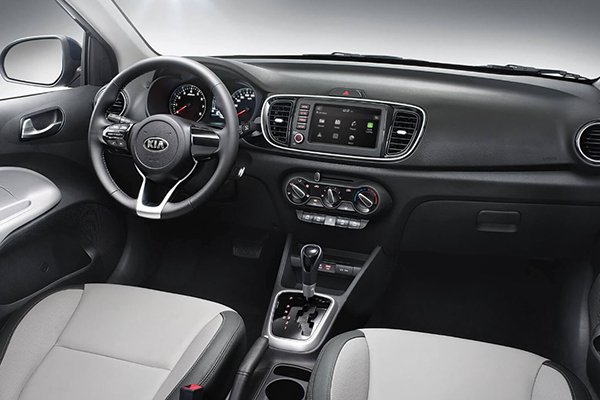 Controls for the air-conditioning are easy to use, and there are sufficient cupholders, door pockets, and storage compartments within the vehicle’s interior for all its passengers’ storage needs. One thing that’s strange with the Kia Soluto’s interior though is the placement of the window controls on the center console which might take a bit of getting used to for a lot of people out there.

With regards to the infotainment system, the Kia Soluto 2019 comes equipped with a seven-inch touchscreen that also has Bluetooth connectivity, aux, and USB ports, and Android Auto and Apple CarPlay. Sound for your infotainment system is sent to a six-speaker setup which performs well. Overall, the Kia Soluto’s interior is comfortable with decent leg and headroom for four people (two adults at the rear seats).

As we all know, new drivers will need all the help they can get when navigating the sometimes difficult streets of Metro Manila. This is why the Kia Soluto is the perfect car them as it comes equipped with a number of technologies and features to ensure convenience and safety.

To start with, the Soluto comes standard with driver and passenger airbags, anti-lock braking system, and a rearview monitor with parking guidance. The vehicle also has crash sensors and electronic brake force distribution. The EX trim additionally comes with an extra security Immobilizer system which could improve your beloved Kia Soluto safety. 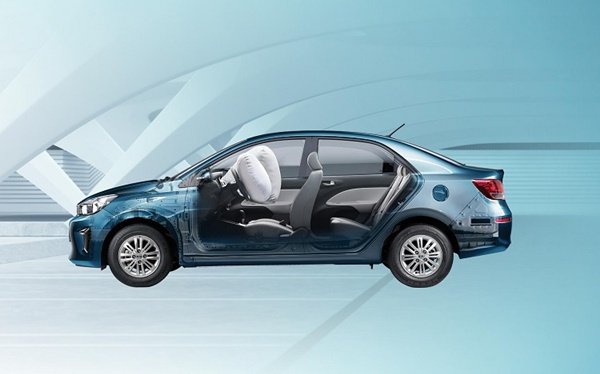 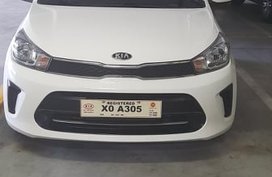 For an entry-level vehicle, the 2019 Kia Soluto performance is quite respectable in terms of power output. That is thanks mainly to its 1.4- liter Kappa MPI inline-four petrol engine which can make up to 94 horsepower and 132Nm of torque.

As such, the Soluto is a bit more powerful than the recently released Honda Brio and the Nissan Almera. It is up to par with the likes of the Toyota Vios. The Soluto is very capable of overtaking and can perform decently when climbing a hill. Power is sent to the front wheels either through a five-speed manual or a four-speed automatic transmission. The 2019 Kia Soluto's Kappa 1.4 liter engine is powerful for its market segment

When being driven through tight city roads like in Manila, the Soluto’s steering is easy to control as it has electronic power steering. With the automatic, the response time when downshifting is good; with a manual, it can be fun. On the highway, the Kia Soluto 2019 in the Philippines can easily hit highway speeds.

When pushing it to its limits though, the noise will definitely penetrate the cabin especially when on low gears with the AT gearbox. The Soluto also comes equipped with a decent suspension that can handle small bumps and potholes, and the brakes have enough stopping power for the Soluto’s size.

This information from the car likely interests you, doesn't it?. However, you can make a better decision because there are numerous cars that will impress you the same with more thrilling features. Grasp the chance to have the best and most diverse deals in our cars for sale section.

Overall, the Soluto is the perfect vehicle for the daily-commuting young professional. It can even perform well as a family vehicle. With a good infotainment system and a very decent power output, the Kia Soluto is very much well worth the price tag. As such, thanks to the developed 2019 Kia Soluto specs, it may well be on its way to becoming a bestseller for Kia.

>>> Kindly refer to Kia Philippines price list to keep updated with the most recent price for all Kia models.