2018 Mitsubishi Xpander Philippines: 3 Things We Wish To Be Improved

Half a year is an ample time for Filipino drivers to have their say on the Mitsubishi Xpander 2018 Philippines.

​​​Since its official launch in the Philippines 6 months ago, the all-new Mitsubishi Xpander 2018 Philippines has been fighting to gain the market share for the Japanese renowned automotive brand. Half a year is an ample time for this 7-seater MPV drivers to have their say on the new model.

Tagged a starting price of ₱885,000, the Xpander scatters fears over its other 7-seater rivals. In the Philippines' car enthusiast community, the Xpander vs Rush is one of the most expected battles when it comes to 7-seat MPV segment.

However, along with its irresistible charms in and out and being considered as a strategic model of the Japanese company, the MPV’s still got some flaws needing the car maker to work on for its future updates, which gives car purchasers a second thought before reaching a deal.

Today, with Philkotse.com find out what they are and how they should be improved. To begin with, the weak point that we can spot at the first glance lies in its design.

The Mitsubishi Xpander 2018 follows a design for a 7-seater crossover MPV with a length of 4,475mm, a width of 1,750mm, and a height of 1,700 mm. These figures almost go in accordance with the Toyota Vios, a 5-seater sedan. Not to mention the Santa Fe, Fortuner, or Innova which put on significantly bigger appearances than the model from Mitsubishi and make the Xpander like being belittled. The Xpander is significantly smaller than its rivals such as the Santa Fe, Fortuner, and Innova

Of course, with those modest measures, it surely provides a rather stuffy atmosphere for the third seats’ passengers.

On the flip side, the Xpander earns an appealing exterior with Dynamic Shield styling based on the XM concept to be an hybrid between the SUV and MPV also known as higher-ground-clearance MPV. The front fascia features the huge X-Shaped grille that is located near the meticulously-designed headlights.

Details towards its rear end and back together display a bold and modish look with the deep-creased veins running along from the doors to the tailgate. The Mitsubishi Xpander Philippines runs on a set of garnishing 5-spoke alloy wheels. The side mirrors come compatible with turn signals. Chrome trim also works to boost the MPV aesthetics. Too small, it provides a rather stuffy atmosphere for the third seats’ passengers Another worth-mentioning downside of the Mitsubishi model can be detected right at your first step into its cabin that houses a wide range of technologies meant for middle-class customers. The adjective used for those techno features should be basic or even “poor”.

The interior is completely coated with felt. The 3-spoke steering wheel equipped with control buttons and a start-engine button fails to impress. Sadly enough, the dual-zone air conditioner comes in manual mode. The centered 6.2” 2-DIN screen display needs more to prove itself.

On the automatic transmission, the driver can be 6-direction adjustable while the manual allows only one. With those interior features, it will be a big challenge to gain the hearts of difficult car purchasers.

A deeper insight into the Xpander regarding its engine, performance, and other highlight features can be found in our full-scale Mitsubishi Xpander 2018 review. Technology features inside the Xpander are "poor"

The next weak point belongs to the engine which is also seen to be the most disadvantageous point by its driver.

The Mitsubishi Xpander Philippines only comes equipped with a 1.5L MIVEC DOHC powertrain, a unit with 16 valves and 4 cylinders, to produce a max output of 103 HP at 6000 rpm and 141 Nm at 4000 rpm. This engine works in conjunction with 5-speed manual or 4-speed automatic to generate power to the front wheels.

These numbers on the Xpander is quite similar to the ones on the engines powering the “old school” Lancer in 2003, an aged engine with minor productivity compared to what we normally expect in a 7-seater model these days. The Mitsubishi Xpander only comes equipped with an aged 1.5L MIVEC DOHC powertrain

And for that reason, it will be an arduous experience every time the MPV goes uphill or on tough terrains. People are even afraid of its ability of stalling when putting on the full load capacity.

According to the latest Mitsibishi Philippines price list, the base model can be had at ₱885,000 - a price tag that seems to be very affordable particularly when considering what the Xpander GLX MT has to offer. Even when it comes to the top-notch version, the P1,060k price is still quite bearable for a lot of Pinoy car buyers who are looking for a reliable and durable 7-seater on the market.

​* Latest changes are regularly updated in our Xpander price list

Despite all the aforementioned weaknesses, Philkotse.com believes the Xpander is still capable enough to stand out ​among many MPV options currently marketed in the Philippines. Here is a complete list of all Mitsubishi Xpander for sale, take a look, contact the sellers and get the best deal! 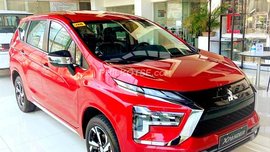