2017 Toyota Sienna Philippines: Needs more to be a strong competitor

User's: 2.5/5
More updates needed for the Sienna to be confident in its competition. With a slightly updated horsepower and a new eight-speed automatic transmission, the 2017 Toyota Sienna still needs more to be a strong competitor in its segments.

The 2017 Sienna can be a choice for parents who prefer a family-friendly minivan to a companion with its comfortable road manners. 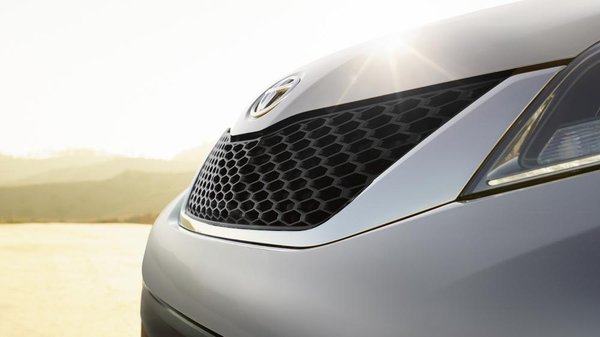 The grille is more streamlined and the headlights look dynamic and sharp. However, as what it used to be since the 2015 redesigned model, the Sienna lacks what it needs to challenge its rivals: the Kia Sedona’s handsome and athletic front end and the Chrysler Pacifica’s polished face. The dashboard of 2017 Toyota Sienna 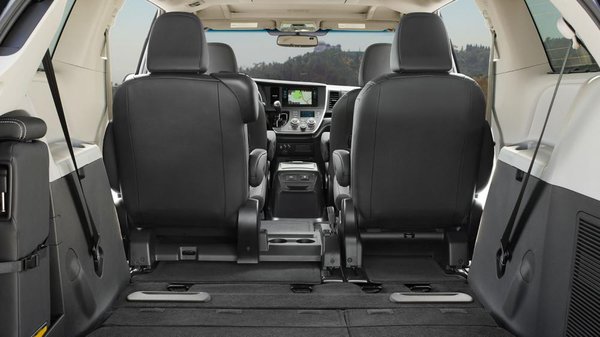 The interior, however, will not bring you disappointment. The cabin is well-positioned, offering driver with all the necessary comfort. The seats are leather-covered; contrast stitching on the dashboard and smooth wood panels are more pleasing for your eyes to settle. Passengers will immediately feel good once settling down in the car. Many key touch points are at hand, covered in soft and textured plastics. Front seats are accented with leather and cavernous with double glove box and sliding center console. The quality is not only found in the Limited Premium but also in lower trim levels.

The Sienna offers generous space with two seats in the second row and three seats in the third. The car can seat 7 adults. Eight passengers can still fit in the car though might feel a little tight when an extra seat is installed between the second row’s captain seats. That optional seat can be removed and placed conveniently at the corner of the back.

Passengers can enjoy the luxury and comfort by pulling a handle right at the side of their seats and the bottom of the seat turn into a small recliner and nicely places under their legs. The car offers up to 12 cup holders, which are positioned right at where they are needed.

The cargo space is just outstanding and makes the Sienna rank top of its class. It’s 39.1 cubic feet, much roomier than the Pacifica and Sedona. An additional feature to increase the capacity of the cargo space is the automatic control positioned at the bottom edge of the rear door. It offers various configurations for folding the seats. And you can fold the third-row seats down to the floor to save more space for luggages. 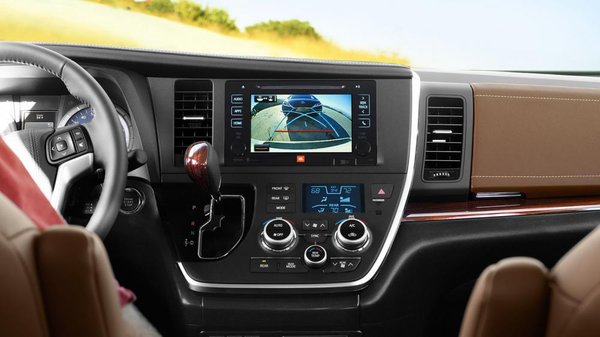 The Sienna offers a glossy 7-inch touchscreen for multimedia and connectivity.

The Sienna offers a glossy 7-inch touchscreen for multimedia and connectivity. The high-resolution screen allows you to easily browse your favorite soundtrack lists or get directions quickly with incorporate navigation features.

The dashboard also contains buttons for 3 temperature control zones in the car and a sync function for the driver to take full control of it. Passengers at the second and third-row seats can conveniently adjust the temperature at their positions.

Appealing features of the Sienna also include the double moon roof for star viewing, a 16.4-inch screen for the backseats to enjoy Blue ray movies, a parking assist sonar and standard backup camera with panoramic view for easier reversing and parking. 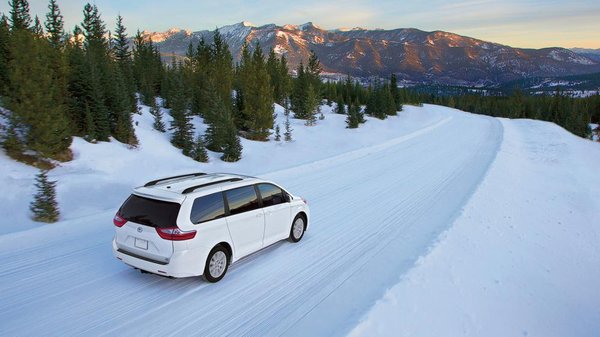 The 2017 Sienna is built with an updated 3.5 liter V-6 direct-injection engine with Direct Shift-8AT

The 2017 Sienna is built with an updated 3.5 liter V-6 direct-injection engine with Direct Shift-8AT that adds 30 more horsepower. The loud engine sound can be noticeable from the cabin. Drivers may feel disappointed because the car doesn’t seem to accelerate any faster. The all-wheel drive adds more weight to the driving and probably bogs down the car. However, as the only minivan that comes with four-wheel drive, the Sienna is reportedly capable of easily muscling on a snow covered road and maintaining its good grip on an icy side street.

The 2017 Sienna does a little better than the 2016 version at fuel consumption. The two-wheel drive is EPA-rated at 19/27/22 mpg city/highway/combined, much higher than the AWD’s 18/24/20 mpg. Its 2WD beats the Kia Sedona by 2mpg and just equals the Chrysler Pacifica.

Driving the Sienna on the highway is relatively comfortable due to its good bump absorption. Body lean is unavoidable during a swift turn but drivers can still have good control of the car regardless of the Sienna’s body length. The Sienna seems to take its pride more in its friendliness and luxury for passengers.

Toyota calls the Sienna “swagger wagon”. But the Sienna seems to take its pride more in its friendliness and luxury for passengers. It doesn’t make a swaggering impression in its class since its two rivals, the Sedona and Pacifica, do their job quieter and quicker at more competitive prices, $27,695 (1,389,524 PHP) and $29,590 (1,484,631 PHP) respectively.

We’ll update the price for the Toyota Sienna soon.

ALTERNATIVE REVIEWS TO THE 2022 Toyota Sienna