User's: 2.5/5
The Ford Expedition 2017 Philippines is considered as one of the quickest vehicles in its class. It scores strong and effective turbocharged V6 engine, large cargo space and seating up to 8 passengers 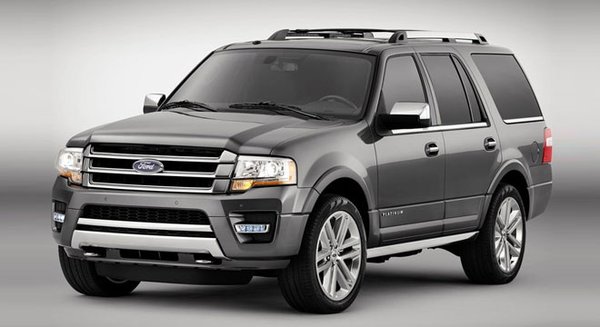 If you need an SUV with very big inside space for your whole family, you probably will not be disappointed with the 2017 Ford Expedition.

The car sees no considerable changes for 2017.

The 2017 Ford Expedition seats up to eight. For those who need large interior space and lots of towing ability, the Expedition should be the first to pop up in their mind. It offers an effective turbocharged six-cylinder engine and a generous space for passengers and cargo.

The 2017 Ford Expedition will not wow you with its tech factors, but it probably will not fail to satisfy your expectation. Drivers can upgrade to the more user-friendly Sync 3 infotainment interface.

The 2017 Ford Expedition is made for its highly big interior. Once you’re inside, you’re welcome by generous seating for 8 passengers and ample space for luggage, which is quite respectable. The car has enough muscle to move down the highway comfortably. 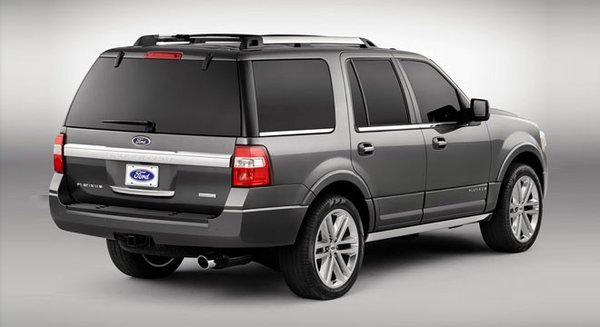 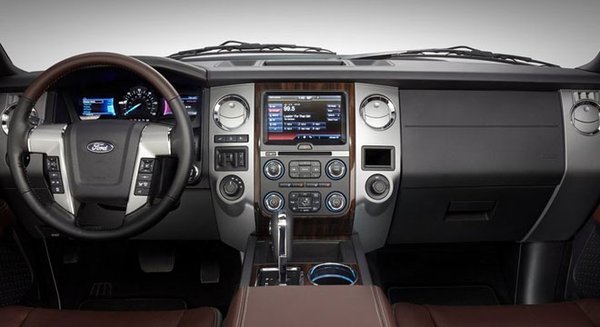 Inside, the 2017 Ford Expedition is spacious 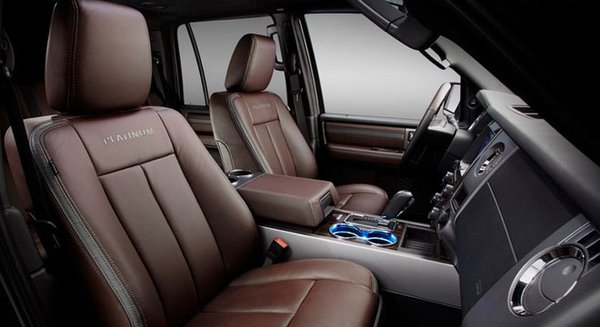 Inside, the 2017 Ford Expedition is spacious. Though the interior is well-trimmed and appealing, the materials are simply hard to touch for some low-budget surfaces, which makes the car not a great example of luxury.

The dated MyFord Touch touchscreen was replaced by Sync 3. The graphics are simple to manage.

Wherever you end up sitting in, from the first row to the third row, you can truly enjoy the spaciousness. The standard 40/20/40 split second-row seats slide and recline.  The third-row seats fold flat down to the floor, so the car can still fit luggage enough for all 8 occupants.

Aside from fitting more people, one of the biggest advantages of a big SUV like the 2017 Ford Expedition is the ability to stow everything. The standard 2017 Expedition has 18.6 cubic feet of cargo space behind the third row, 108.3 cubic feet with the second and third rows folded. 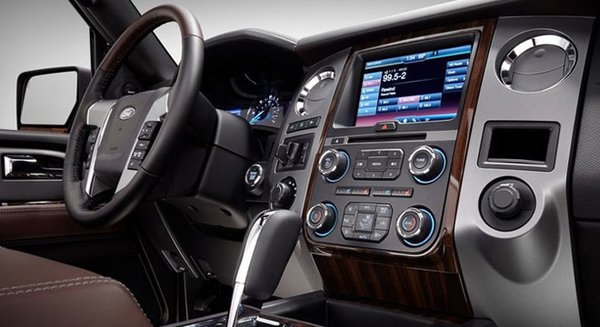 The 2017 Ford Expedition includes four trim levels: XLT, Limited and King Ranch and Platinum. All can be had in two- or four-wheel-drive version.

The 201A package includes a power liftgate, leather upholstery for the first- and second-row seats (the third row has vinyl), a 10-way power driver seat (with power lumbar), a six-way power front passenger seat and a power-folding third-row seat.

The Ford Expedition’s limited trim offers all of the aforementioned features from 202A package along with 20-inch wheels, front parking sensors, power-folding mirrors (with a driver-side auto-diming mirror), automatic wipers, heated second-row seats and an upgraded 12-speaker Sony audio system.

The 301A package in the limited trim adds a sunroof, retractable running boards, and a voice-activated navigation system.

The Platinum trim is adorned similarly with the King Ranch trim but it lacks the Western theme and offers 22-inch wheels and a sunroof.
>>> Related: Top 10 affordable cars with panoramic sunroof to buy The 2017 Ford Expedition does perform well in government crash testing

A turbocharged 3.5-liter V6 is on offer. It puts out 365 horsepower and 420 pound-feet of torque, which allows the car to move quickly most of the time.  When hitching up a load, the 2017 Ford Expedition nears its limit with towing capability up to 9,200 pounds.

Despite its large dimensions, the 2017 Ford Expedition proves popular for being one of the quickest vehicles in its class.

The Ford Expedition adds a lot of safety and convenience technology including antilock disc brakes, stability and traction control, trailer sway control, front-seat side airbags and full-length side curtain airbags.

Perhaps the most attractive device, at least to parents, is Ford’s MyKey. It allows you to produce another key - MyKey with speed and volume setting of your preference for the car. If your children or your valets want to borrow the car, just give them that key and you will not have to feel anxious about them speeding or blasting music when you’re not with them.

The 2017 Ford Expedition does perform well in government crash testing, it receives a five-star rating for overall protection.

Despite its large dimensions, the 2017 Ford Expedition is quite easy to control on the road. The four-wheel independent suspension gives it a very smooth ride while similarly sized SUVs with live-axle rear suspensions are stiffer.

Plus, thanks to the car’s responsive steering, darting in and out of traffic, tight spaces or crowded parking lots is quite a simple task.

The 2017 Ford Expedition is considered as one of the quickest vehicles in its class. It scores strong and effective turbocharged V6 engine, large cargo space and seating up to 8 passengers.

ALTERNATIVE REVIEWS TO THE 2023 Ford Expedition