User's: 5.0/5
Let's take a good hard look at the updated Q7 via our Audi Q7 2020 Philippines preview before it's hitting the local shores. Click now! 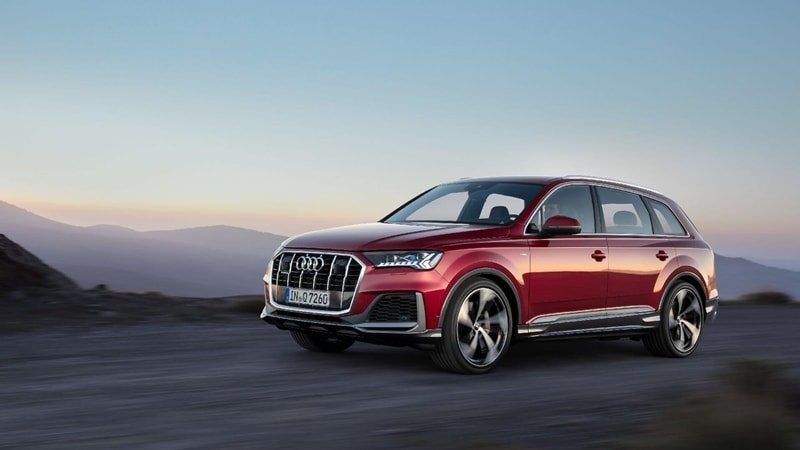 1. Audi Q7 2020 Philippines: A preview of its very SIGNIFICANT update

Unveiled at the Frankfurt Motor Show back in 2005, the Q7 is Audi’s entry into the mid-size luxury crossover SUV market segment.

At that time, the Q7 gained a lot of attention because this was the German-based company’s first-ever SUV. And surprisingly, it’s a seven-seater mid-sized model. A bold move for Audi.

With regards to the 2019 facelift, many car journos who already got their hands on this new Q7 are saying that the very significant facelift had paid off.

So, in anticipation of the updated release in the Philippines this year, here’s an in-depth Audi Q7 2020 Philippines preview of what we’re getting. Le'ts check out with Philkotse.com

If we start from the greatest and most obvious change, then we’ve got to talk about the front fascia first.

Upfront, the refreshed 2020 Audi Q7 exterior still retains the hexagonal grille. What’s changed however is that the old horizontal slats are gone and are instead replaced with six, thin, vertically oriented ones.

When viewed from the rear, the new Q7 now has a chrome-clad strip that links together its new tail-lights. 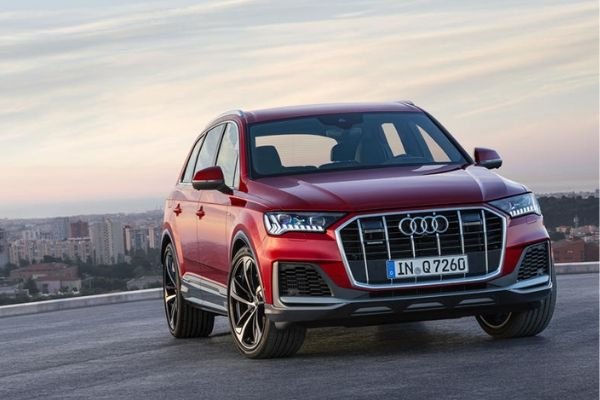 Reminds me of Hannibal Lecter wearing his mask

Going back to talking about the front end, the Audi Q7 currently on sale is now equipped with LED headlights as standard. There’s even an optional pair with laser light beams with dancing diodes for God knows what reason.

For the American market, they only turn on when starting the car. In some states, they’re actually used to light up the road. We’re a bit apprehensive with regards to the latter and we would rather that it’s only a starting up feature instead of an actual, functional source of light. 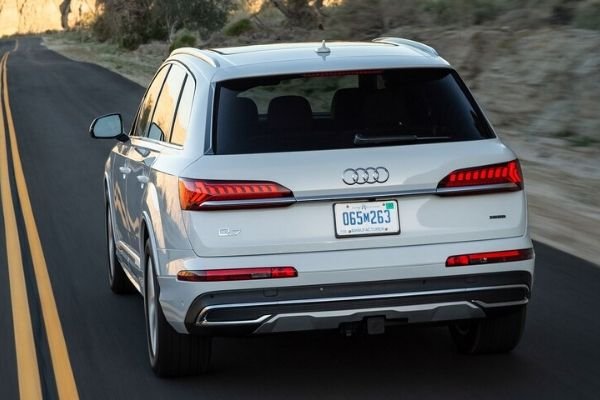 The rump is sleeker than ever before

Overall, the new Q7 is much more aligned to Audi’s design language. It’s general shape now looks crisper, and thanks to the new rocker panels and the new rear bumper, it’s now sleeker and more youthful than ever before.

Will the new Audi Q7 exterior be enough to attract a young and hip crowd? Let’s wait and see.

Inside, the 2020 Audi Q7 interior is definitely high-end. But if you’ve got a keen eye like us, then you’ll quickly notice that it’s like Audio transplanted the A8’s interior to the new Q7.

They actually pulled it off though especially with how they improved the dashboard. Note how the larger screen is integrated into the dashboard

With regards to the dash, Audi has given the Q7 not one, but dual touchscreens. These are not your run of the mill screens because these have haptic feedback, meaning that you’ll actually feel and hear whenever you’re fiddling with it.

Note though that the smaller, 8.6-inch screen actually controls the HVAC. Sure, the haptic feedback feels great, some of us would’ve preferred a set of actual, physical buttons for this. Nothing beats REAL feedback after all.

Moving on, the Audi Q7 2020 was a wealth of features. There’s a virtual cockpit which provides clear Google Earth images, a Wi-Fi hotspot, Apple CarPlay, a signal booster, and an optional wireless charger. We would’ve preferred however if they added Android Auto.

As for the seats, the Q7’s Black Optic package adds Valcona leather, Alcantara headliner, and massage seats. With regards to how roomy it is, up to seven adults will fit in nicely but the third row can be tight for larger/wider people. 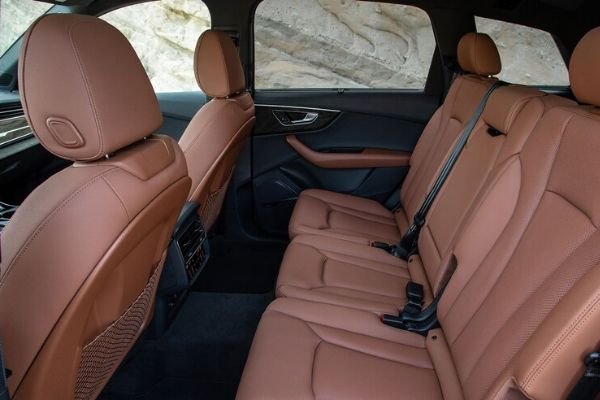 Space is no issue for the 2nd row. As for the third row...that's another story

Apart from the usual 248 horsepower/336 Nm 2.0-liter turbo, the refreshed Q7 now comes with a 3.0-liter V6 turbo that can make 335 horsepower and 500 Nm of torque instead of the supercharged mill that the previous version came with.

It’s also a matter of time before a twin-turbo 4.0-liter V8 version named the SQ7 Performance comes out though we highly doubt that face meltingly powerful engine will ever get here. 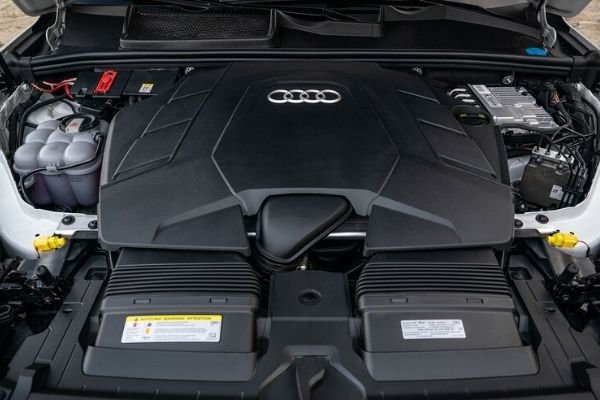 Under that engine cover is the Audi Q7's turbocharged V6

For the new Q7, the two engines we’ve mentioned will be mated to an eight-speed automatic with power sent to all wheels. And yes, the all-wheel drive is standard.

With this kind of power, the Q7’s V6 version can tow up to 7,700 pounds. When it comes to fuel efficiency however, it’s at an understandably low 7.6 km/l (city and highway combined).

>>> Read more: The Audi Quatto AWD system and what you need to know about it

Being an Audi car, the Q7 has loads and loads of safety features that’ll either cause a sensory overload or will turn you into a complacent, lazy driver.

There’s a thing called the Audi Traffic Light Information system which tells you when the light has turned red or green, an intersection assist which actively looks for cross traffic, and numerous other electronic driving nannies that’ll keep you…uhh…”safe”.

>>> Widen your search to Cars for sale from all brands

Overall, we think that the Audi Q7’s refreshed version has just the right balance in terms of power, utility, and comfort. It can tow, it can fit in your large family, and with the seats folded, you can address what people are saying is a criminally small trunk.

When it comes to the Q7’s fuel efficiency however, it quickly becomes apparent to everyone that the Q7 isn’t a very economical vehicle.

Afterall, this is where the “luxury” thing partly comes into play and also, that’s the price that you have to pay for that kind of power. 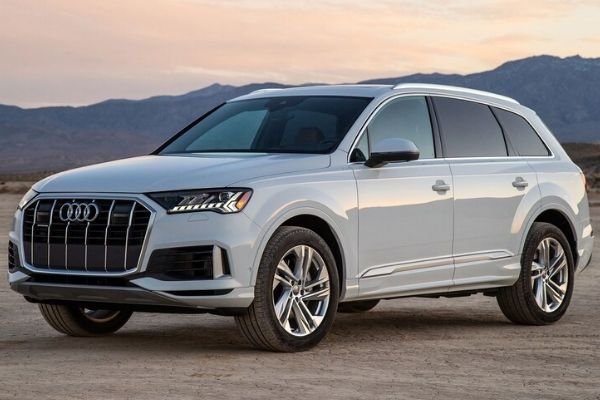 It definitely qualifies as a sleeper straight from the factory

Another thing is the obvious abundance of active safety technologies. We think that those will just end up as “enablers” for bad/lazy driving and a fairly competent driver won’t need those at all.

Despite these gripes of ours, we’re still very much excited about this updated Audi Q7 2020 and its eventual release here in the Philippines.

ALTERNATIVE REVIEWS TO THE 2022 Audi Q7