The all new Ford Everest 2018 has achieved a new level of refinement and handling capability. With a true body-on-frame chassis and a 225mm ground clearance, the Everest can confidently challenge any terrain on its go to become one of the toughest SUVs and a fierce rival in its segment as well.

Especially, the recent sneak peek of the Ford Everest 2018 facelift in Australia last June has proved itself to be a perfect combination of an attractive design, state-of-the-art technology, balanced off- and on-road capability and a sophisticated interior. According to latest car news, the mid-cycle facelift version will possibly rollout in Africa and APAC, including India, some time next year. 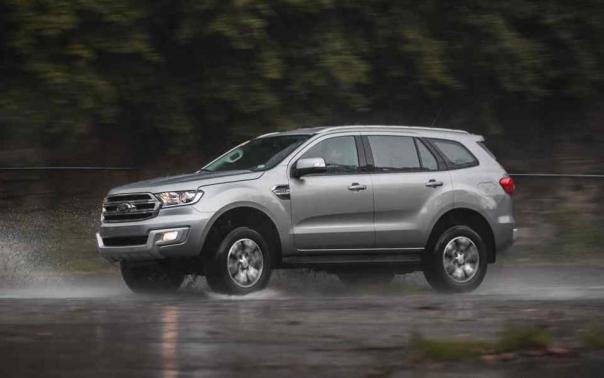 This time, Philkotse.com will bring you a deeper insight into this excellent SUV by analyzing one of its variants - the mid-grade Everest Trend. All details about this car will be unveiled in our Ford Everest 2018 review. 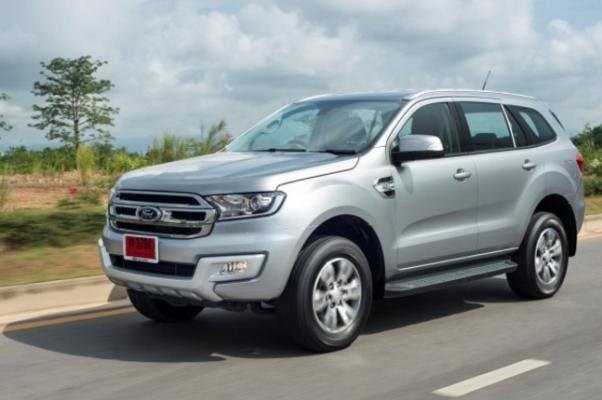 Not owning a look that is as aggressive and sleek look as other models in its segment but the Ford Everest impresses us with its prominent and strong-willed body.

The exterior is eye-catching with an athletic front fascia which features a signature daytime running LED light system and a projector halogen headlight system, combined with an outstanding inverted hexagonal chrome grille. This brings the SUV a handsome look and a firmness to reach a great performance on the road. 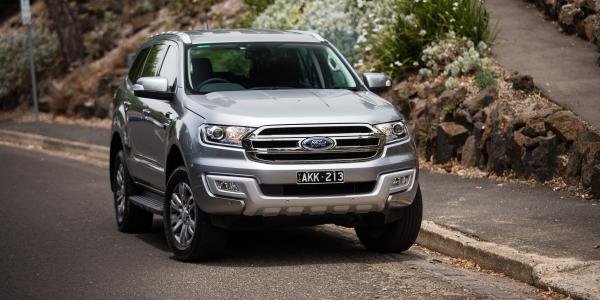 The exterior is eye-catching with an athletic front fascia

The car is reinforced by 18-inch alloy wheels mated with 265/60 all-season tires. Although this alloy wheels’ size is smaller than many other same-segment vehicles, the Everest is still preferred because of its easy handling in harsh and rough terrains.

Moving to the rear, the C-shaped taillights are exactly what we need to pay attention to. Both Titanium and Trend models are adorned with beautiful and cool LED lamps at the rear. For the Ambiente, they are bulbs. 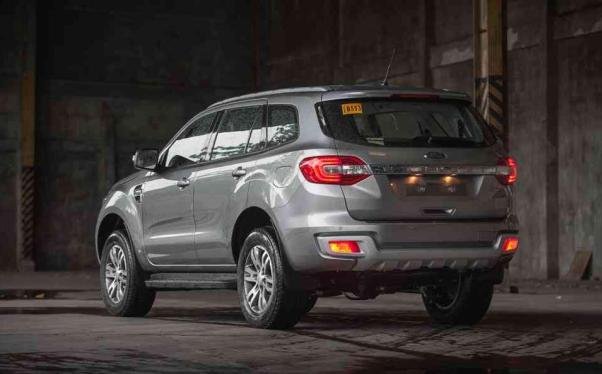 To be identical with the front fascia, the tailgate trim of the rear is also completed in chrome and the rear bumper is equipped with reverse sensors to support drivers with easier parking.

On the whole, thanks to sophisticated and stylish design touches, the Ford Everest 2018 model boasts an elegant and attractive exterior that not every current SUV can offer.

Stepping inside, the Ford Everest 2018 interior provides a larger cabin space compared to its previous models with more than 30 stowage spots dotted throughout the cabin to keep your interior clean and tidy, not to mention a roomy glovebox which can house up a 16-inch laptop. Additionally, with the foldable second and third-row seats, the vehicle is capable of holding up a maximum of 2,010  of cargo space. Enhancing interior space is the fake metal pieces that are distributed throughout the cabin. 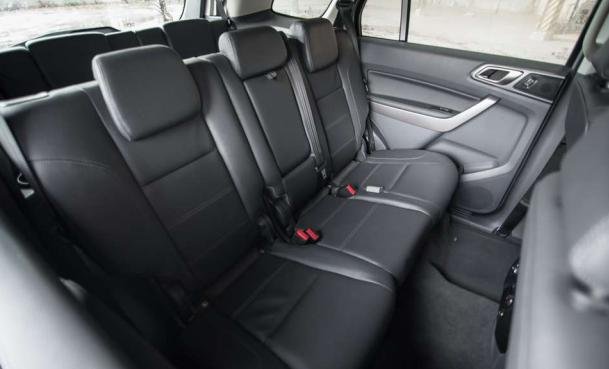 With the foldable second and third-row seats, the vehicle is capable of holding up a maximum of 2,010 L of cargo space

Speaking of the seating, all of them are wrapped by contrast stitched leather while the whole interior is covered in good-quality plastic. The second-row seats provide a plenty of headroom, legroom and elbowroom for 3 passengers. Normally, the third row is for teenagers and children but it can also house up tall occupants by sliding the second row forward to release more legroom.

Because of the fact that the Everest is considered a special variant of the Ford Ranger, some of  you might find yourself not much surprising when first entering the Everest. The dashboard gets the same design  with that of the Ranger while the control layout also stays unchanged. The steering wheel is still covered by leather and comes with a load of controls. 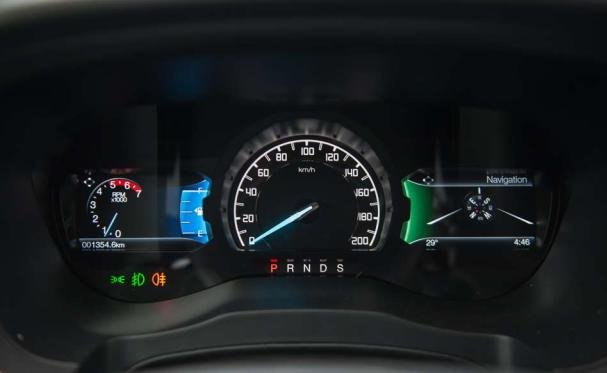 Worth mentioning is that the Ford Everest now comes equipped with the all-new SYNC 3 infotainment system instead of the SYNC 2 of the Ranger. Thanks to a more intuitive touchscreen and quicker processors, navigating through menus becomes much easier. With the SYNC 3 which meets standard with a navigation system, the seven-seater offers Android Auto and Apple CarPlay, plus the normal USB, Bluetooth, CD support and AM/FM radio. 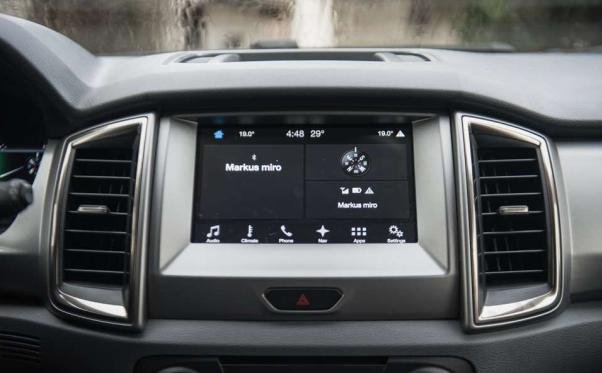 Even though the Ford Everest is the mid-grade variant in the lineup, the US car manufacturer still gives this version a full kit of equipment including:

The Ford Everest Trend is powered by a 4-cylinder 2.2 L Duratorq turbo-diesel engine which is capable of dishing out 158 hp and 385 Nm of torque, works in a conjunction with a 6-speed automatic gearbox. The engine has a codename as “Puma”. Although the size of the 2.2 L is quite small, its performance is more surprising than expected. Regarding the car’s acceleration, the turbo still has some delays. However, thanks to a smooth automatic transmission, modified geometry turbine and a conventional rail technology, the Everest still brings a smooth, strong and enjoyable driving. 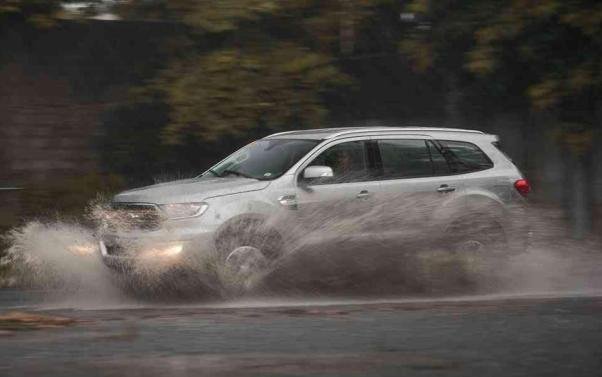 The Everest brings a smooth, strong and enjoyable driving

With the abundant traction available anytime, crossing challenging terrains is not a matter for the Everest. On the highways, the SUV runs smoothly with a strong and stable engine operation assisted by the electronic power supported steering (EPAS).

Noticeably, although the car comes with an automatic transmission, it still has a manual select for drivers. And its brakes, “agile” and “progressive” are enough to describe. 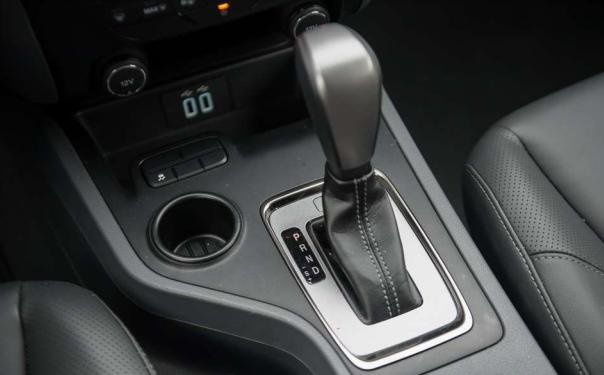 Although the car comes with an automatic transmission, it still has a manual select for drivers

Thanks to slightly thicker tires and its soft damping, the Trend satisfies drivers with a comfortable ride.

4. Ford Everest 2018 Specs in the Philippines

6. Ford Everest 2018 Price in the Philippines

The Ford Everest Trend is priced at P1,599,000 which is a competitive price on the market. Although the mid-grade variant lacks some dominant features compared with the Titanium such as the AWD capability, 20-inch alloy wheels, the fancy HID headlights with LED daytime running lights, tire pressure monitoring system and reverse camera, still, it is a great choice for those who are seeking a well-equipped midsize 4x2 7-seater SUV.

At last, after looking through our in-depth Ford Everest 2018 review, will it deserve to be named on your wishlist? In case you are also interested in other Ford models, here is the latest Ford car price list in the Philippines.