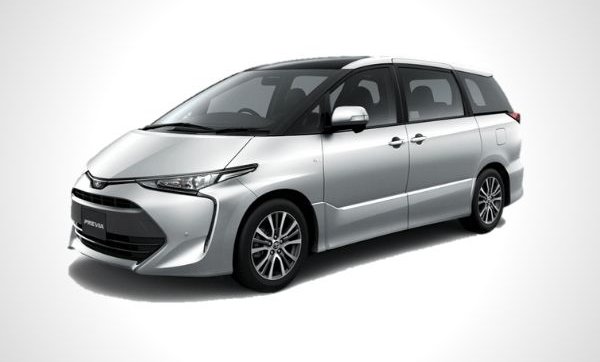 The Toyota Previa is a four or five-door minivan offered in three generations. It used to be the second-largest minivan in the stable of Toyota Motor Corporation after the Toyota Alphard. The Toyota Previa features a lengthened body detailed with an iconic curved roof that aids its aerodynamic capability and sliding doors on both sides. Inside, it offers a lavish interior packed with amenities seven passengers will adore. The Toyota Previa is powered by a 2.4L engine paired with a seven-speed Super CVT automatic transmission. It is offered in White Pearl Crystal Shine, Silver Metallic, Ice Titanium Mica Metallic, Black, Red Mica Metallic, and Sparkling Black Pearl Crystal Shine.

The second-generation Toyota Previa was presented in January 2000 revamped with a longer wheelbase, a sliding rear door, and six to eight seats. Worldwide, the minivan was made available in a 2.0-liter, a 2.4-liter, a 3.0-liter V6 engine, and a hybrid version.

The third and last generation of the Toyota Previa was introduced in January 2006 upgraded with a wide array of safety and technological innovations.

The Toyota Previa is equipped with the Toyota Telematics System that allows the driver to track their vehicle using one map interface.

The Toyota Previa is a front-engine, front-wheel-drive minivan. It runs using a 2.4-liter four-cylinder 16 valve DOHC engine mated with a seven-speed CVT automatic transmission guaranteed to emit 168 horsepower and 224 Newton meters of torque. What is the body type of Toyota Previa?

Toyota Previa is a minivan car.

What are the colors available in Toyota Previa in the Philippines?

What are the dimensions of Toyota Previa?

Does the Toyota Previa come with sunroof?