If you're looking for a more convenient way to browse Kaicene cars, go online, and visit Philkotse.com. The user-friendly site offers a wide selection of new and old Kaicene models plus you can enjoy exciting promos and deals. Also, know the latest news, price list, reviews, and information about your other favorite car brands.

Changan International Corporation introduced a new division with the brand name Kaicene. The car brand represents the company's two ideals that it aspires. Kaicene is derived from the words "Kai," which means song of triumph, and "Cheng," meaning a bright future. These two aspirations make the Kaicene brand look form forward to a prosperous future.
Chang'an Automobile Co., Ltd. is an automobile manufacturer state-owned by the Chinese. The company is headquartered in Chongqing, China. The production of micro vans, passenger cars, light trucks, and commercial vans is the company's principal activity. The roots of the company stretched back to 1862 when it started producing military supplies. It began manufacturing automobiles in the year 1959.

In the Philippines, Berjaya Auto Asia Inc. is the local distributor of SsangYong, Mazda, and Changan. It has recently announced that the Chinese brand has received a new name. Changan is now known as Kaicene. All models are now rebranded to reflect the brand's name change, but specific models, including X5 Truck, Star Truck, and Honor S, will keep the same badge design. The company changed its name on July 1, 2020.

Kaicene has one dealership in the Philippines located at 1120 Quirino Ave Ext., Paco, Manila. Kaicene Star Truck and Kaicene Honor S are the most popular models from the brand that are sold in the Philippines.

The Kaicene CX70 is a seven-seater crossover. For the Philippine market, this model only has one variant, and it is priced at Php 879,000.

Under the hood, the Kaicene CX70 uses a 1.5-liter turbocharged inline-4 gasoline engine that can produce up to 148 horsepower and 230 Nm. Power is delivered to its rear wheels via a six-speed automatic gearbox.

Locally, the CX70 competes against the likes of the Mitsubishi Xpander/Xpander Cross, Toyota Rush, Honda BR-V, Suzuki XL7/Ertiga, the Toyota Avanza, among others.

The Kaicene Honor S 2023 is a 7-seater MPV introduced by Changan's commercial vehicle division. It is available in the Philippines with a price of Php 585,000 for the 7-seater variant, with an 8-seater as an option. Powering the MPV is a 1.5-liter inline-4 gasoline engine capable of generating 105 horsepower and 145 Nm of torque. Power is sent exclusively to the rear wheels via a 5-speed manual transmission.

Kaicene Star Truck is formerly known as Changan Star Truck before the brand gets renamed. It is a small commercial vehicle powered by a Euro-4 compliant four-cylinder gasoline engine measuring 1.2 liters in displacement. This powerplant generates 97 horsepower and 119 Newton-meter of torque paired to a five-speed manual transmission that sends power to the rear wheels. The primary purpose of the Kaicene Star Truck is to haul cargo. The Changan Star Truck is available in three body configurations: Aluminum Box, Dropside, and Cab and Chassis body styles. Some of the basic features present in the Chinese commercial vehicle include three-point seat belts and a two-DIN CD player for the occupants' safety and entertainment while on the go. The Kaicene Star Truck is a perfect commercial vehicle for entrepreneurs searching for a budget-friendly and quality ride for their business, be it big or small. The availability of three different body configurations makes the Star Truck an ideal vehicle for any type of business. Kaicene Philippines offers the Star Truck Cab and Chassis for Php 435,000. The Dropside pickup is priced at Php 455,000. The built-in aluminum box variant is sold for Php 488,000. Kaicene Star Truck is under Berjaya Auto Asia, which is the official distributor of Kaicene vehicles.

The 2022 CX70 is Kaicene’s answer to the current crop of multi-purpose family and business haulers that are all the rage lately. 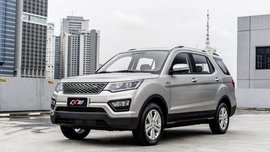 It’s going to give the current favorites some serious competition.