The Lexus LS is the premium flagship model of Lexus - a famous Japanese car manufacturer. The name LS stands for “luxury sedan” or “luxury saloon.” This full-size, four-door sedan is the epitome of sophistication as seen on its well-crafted exterior with the right balance of sportiness and innovation. Inside, it is fitted with modern amenities and top-notch safety features that guarantee unmatched comfort and consistent convenience in every ride. Locally, the Lexus LS is available in two variants: the Lexus LS 500 and the hybrid Lexus LS 500h. It is offered in Sonic Quartz, Sonic Silver, Sonic Titanium, Black, Graphite Black Glass Flake, Red Mica Crystal Shine, Sonic Agate, Sleek Ecru Metallic, Amber Crystal Shine, Deep Blue Mica, and Manganese Luster.

The first-generation Lexus LS debuted at the 1989 North American International Auto Show in Detroit, Michigan. It was fitted with a 4.0-liter V8 engine paired with a four-speed automatic transmission. During that time, it was among the first premium sedans fitted with an electrochromic rearview mirror, a telescopic steering wheel with a built-in SRS airbag, and power-adjustable seat belts.

Its second generation was launched in 1994 refreshed with a stronger body structure, longer wheelbase, updated brakes, and improved suspension.

In January 2000, its third generation was released at the North American International Auto Show flaunting an interior based on a guest room at the Four Seasons Hotel. The seats were made in reference to the first-class seats of Japan Airlines and British Airways. Its fourth-generation was revealed in 2006 updated with a new platform. A hybrid version was also unveiled.

The current generation was launched in the Philippines in 2017.

The LS flagship sedan is a literally a moving art piece

Both variants measure 5,235mm long, 1,900mm wide, and 1,450mm tall with a wheelbase of 3,125mm. Highlights include the Japanese company’s signature detailed spindle grille, front LED headlamps with auto-leveling functions, rear LED combination lamps with LED turn signals, an auto lift-up function that automatically lifts the vehicle while passengers enter or exit, and sensors in the rear for hands-free access to the trunk.

Supporting the premium sedan is a set of 245/50 RF19 noise reduction wheels.

The cabin of the Lexus LS is roomy and is fitted with sophisticated features such as tailored seats with a shiatsu massage function, retractable ottoman rear seats, Kiriko glass art ornamentation in the panels, hand-pleated diamond-shaped, interior upholstery, and infrared rays sensor that efficiently monitors the body temperature of the riders for climate control.

The standard on all variants is the 11.6-inch LCD screen. Cabin sounds are provided by the Mark Levin audio system with 24 speakers.

The Lexus LS 500 runs using a V6 24-Valve twin-turbo DOHC engine mated to an automatic transmission. It can produce 415 horsepower with 600 Newton Meters.

The Lexus LS 500h is powered by a 3.5-liter V6 engine paired with two electric motors with a multi-stage hybrid transmission. It generates 354 horsepower with 650 Newton meters.

*** Please note that the Lexus LS‘s prices might differ in some showrooms and should serve as reference only. Lexus Philippines has introduced the refreshed 2021 Lexus LS flagship sedan in the local market that now comes with a more affordable base variant.
Lexus Philippines is offering special promos for the month of July. In this promo, the Japanese carmaker is offering 30- or 50-percent down payment, with zero interest for up to 48 months.
Lexus’ flagship model, the LS, gets minor updates to its exterior. The Japanese brand also tweaked the interior of the LS for a more comfortable driving experience. 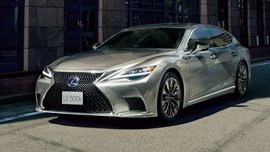 2021 Lexus LS now in the Philippines with lower price tag

Get the flagship Lexus for under P6-million. 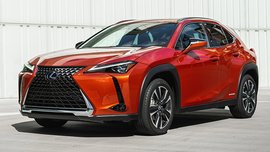 So you better check it out. 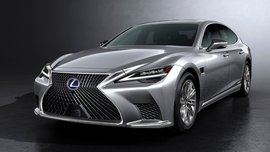 2021 Lexus LS gets a mid-cycle update, improving comfort and quietness

Minor tweaks have also been done to its interior and exterior.