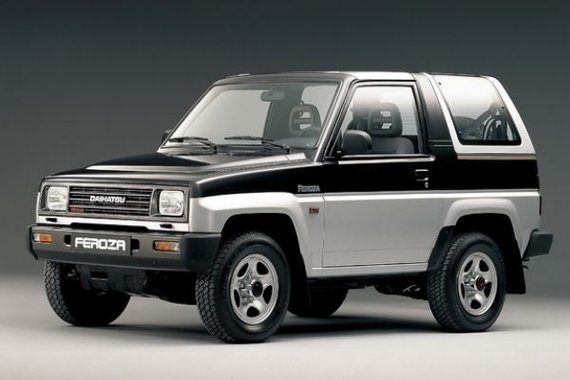 The Japanese automobile maker Daihatsu named their SUV lineup as Daihatsu Rocky. Daihatsu is used for mini SUVs, ladder frame-based that are sold in Japan and other countries within 1989 and 2002. It was slowly replaced by the launch of the Terios in 1997. At the start of 2019, the Rocky brand of product came back to Japan as a subcompact crossover SUV that replaced the Bego and relaunched and placed it in the market under the Toyota brand and known to be the Toyota Raize. In Japan, the F300 is also known as the Daihatsu “Lovibond” Rocky. While in Europe and Australia, the F300 series is known as the Daihatsu Feroza. The name “Rocky” was given to the F70 which is a large vehicle under the Rugger/Fourtrak in many countries. In Latin America and Asia, it is known as the Feroza. In Indonesia, the Rugger was also named Feroza that runs on petrol-engine, rear-wheel-drive vehicle. Daihatsu Sportak was sold as the F300 series Rocky in the UK. In 1999, the Feroza was no longer produced and was replaced by Daihatsu Terios.

The Daihatsu Feroza was launched in 1989. It is also known as an F300 series and Rocky. During its production, it also underwent some minor facelifts. The changes were mostly focused on the grille. The taillights were arranged on the bodywork.

The Daihatsu Feroza is square in shape as seen through its rectangular grille and headlamps. The fender area adds a competitive stance to this compact SUV. The square shape Feroza conceals a thick B-pillar that works as a rollover protection bar. Included are also the rear rollover bar, the white front roof panel, and rear passenger canopy. This can be removed in case you want a top-down ride.

The interior of a Daihatsu Feroza showcases excellent ergonomics, though the rear passenger area can do a little more expanding since legroom is limited. Also included is a front-passenger grab bar. The seats can look fragile, but it can offer good support and comfort. It also has adjustments that allow the front passenger easy entry.

The Daihatsu Feroza’s safety features include central locking and power steering. Also included is a fully built-in security alarm system to protect it from theft.

The Daihatsu Feroza comes with an independent double-wishbone front suspension and coil spring at the rear.

The Daihatsu Feroza is powered by 1.6L HD-C/HD-E SOHC 16-valve four-cylinder gasoline engine. It comes with an all-wheel-drive transmission as well as a five-speed manual transmission.