Toyota Philippines is about to welcome their newest addition to their MPV family which is called the Toyota Rush 2018. The second generation Toyota Rush made its grand debut in the Philippine market last May 5-6, 2018. The country’s’ top-selling automotive company wants the Filipinos to experience and feel the all-new 2018 Toyota Rush during the launching event at the Bonifacio Global City, Taguig. The mid-sized MPV was first launched in Indonesia last November 2017 that served as a gateway to the Asian Market. Six months after its initial debut the Rush finally made its way to the Philippine market.

This cool and affordable vehicle is expected to be marketed as a counterpart for the Honda BR-V and the Mitsubishi Xtender and other mid-sized compact MPV which falls under the same price range.

The Toyota Rush 2018 is priced reasonably lower than the high-end Fortuner which is perfect for those who wants to upgrade from a sedan to an MPV without putting a strain to their pocket. The Toyota Rush is available in 2 variants, the Rush 1.5E which is a 5-seater (MT/AT) and the Rush 1.5G a 7-seater (A/T).

Among Toyota cars for sale in the Philippines, the Toyota Rush would be best described as a mini version of the Fortuner by simply just looking at its exterior. This mini-MPV looks very much sleek and attractive which is one of its selling points to Toyota enthusiasts. Additional aesthetic features were also added to its exteriors such as fog lamps, 4-slat grille, a tailgate mountain spoiler and a rear spoiler which contributes a lot to the stability of the vehicle. The Rush 1.5G model comes with additional roof rails and a cool set of 17-inch alloy wheels. Shifting into its interiors, the Toyota Rush proudly boasts its classy and spacious interiors as compared to its predecessor. The interior also resembles the Fortuner and all models are equipped with a standard 7 inch LCD infotainment system, eight sets of speakers for better sound quality and an upgraded steering with audio control. Just like the majority of the MPVs, the Rush has a push button key-less ignition system and a climate control system. 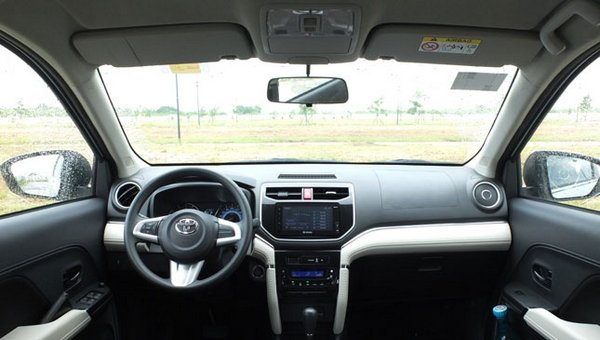 Another selling point of the 2018 Rush is that the vehicle has more legroom and offers a more spacious interior compared to the previous model. Both the middle and rear seats are adjustable providing more comfort to its passengers.

The Toyota Rush also carries the same engine as the Avanza which is a 1.5 liter, Dual-VVTi gas powered engine which is capable of churning into 102 hp @6000 rpm and a torque of 136 Nm @ 4200 rpm which is compatible to both 5-gear manual and 4-gear automatic transmissions. All models are available in gasoline variants and are fuel efficient as well. The Toyota Rush also carries the same engine as the Avanza which is a 1.5 liter, Dual-VVTi

When it comes to safety, the Toyota Rush is compliant by making sure that the vehicle is packed with both active and passive safety measures. All variants are equipped with front and rear seat belts with matching sensors, it has 6 airbags including curtain and side airbags for the maximum safety of the driver and its passengers, a hill start assist control which makes driving uphill much easier, 2 parking sensor cells and a rearview camera.

6. Toyota Rush 2018 price in the Philippines

*Kindly refer to our Toyota Rush Philippines price list to keep up to date with the latest changes in prices of this MPV.

To wrap up, let's with Phikotse.com have a look at this pros & cons table of the Toyota Rush to consider if the MPV's really worth it.

After seeing all things the Toyota Rush has to offer, should you want to go for one, rush to the nearest Toyota dealerships right now or check out our list of both new and used Toyota Rush for sale in the Philippines.